SarahW has uncovered that the Crescent of Embrace does indeed point directly towards Mecca. She is just missing one data point. Because the crescent itself is lopsided, its direction is somewhat indeterminate. What fixes its orientation is the memorial's copse of trees.

Charles Johnson, Salamander and probably some others note that the memorial's copse of trees is positioned roughly like the star on an Islamic flag. Real Clear Politics has a selection of Islamic flags posted. All of the flags that only have one star have the star placed so as to bisect the crescent. See the likeness? 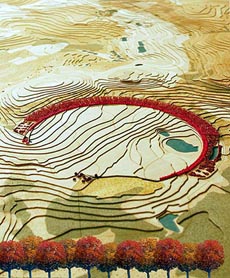 The copse (at the upper end of the yellow shaded graveyard area) is somewhere near the mid-line of the crescent, where the star on an Islamic flag would be placed.

If one supposes that the copse is intended to represent the Islamic star, that gives a method of bisecting the crescent. Just draw a line from the copse, through the center of the partly inscribed circle, and see how closely it points to Mecca. This can be observed directly on SarahW's graphic. She did not project her Mecca line (called a qibla, calculated at a qibla web site) back towards the copse of trees, but you can do this yourself by using the edge of a piece of paper against your computer screen. (I used a paint program to overlay the extended line onto Sarah's graphic, but I can't get it to upload, so I'm just posting his original graphic, with no value added. Hope she doesn't mind.) 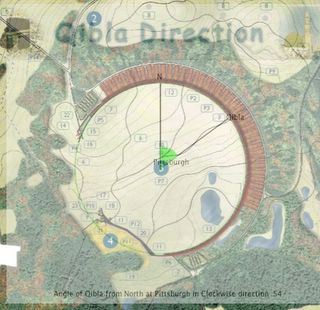 SarahW's graphic. The qibla line starts at the center of the circle partly enclosed by the crescent and points towards Mecca.

See how the qibla line projects through the copse? A line from the copse to the center of the circle IS the qibla line. That nails it. This is without a doubt an intentional planting of an Islamic flag on the burial site of the heroes of flight 93.

INTERJECTION: I was able to upload my graphic. Here it is: 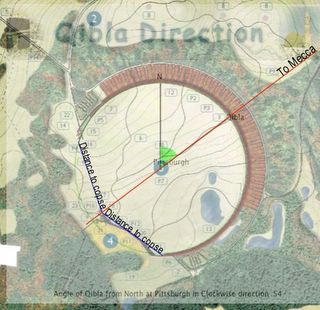 What is the significance of the fact that the Crescent of Embrace is facing AWAY from Mecca? The obvious implication is that it is a crescent of OUTWARD embrace. And what is Islam's outward embrace? Jihad: the Muslim duty to strive to bring the entire world into submission (the literal translation of "Islam"). What form of Jihad took place on flight 93? Violent aggressive Jihad. No Jihad of "inner struggle to do the right thing" here.

The interpretation of the proposed memorial is ineluctable. The Crescent of Embrace is a consciously intended memorial to the Islamo-fascist "martyrs" who murdered the heroes of flight 93! No other conclusion fits the facts.

Will research into the background of the designers uncover an Islamo-fascist connection? And who the hell was on that jury? This is gonna be fun.


UPDATE:
Wow, Voice of Reason calculates the orientation towards Mecca to be within less than one degree.

He says he centered the crescent by looking at the furthest out red pixels on either side. How does that compare with using the copse to center the crescent? The correlation is very close. I just checked it out. You can too by clicking on the National Park foundations graphic, blowing it up, and measuring from the upper and lower crescent tips to the center of the copse. I get that the copse is not quite precisely centered. The midpoint between the crescent tips seems to come out about 2/3rds of the way up the copse. (I first suggested that the copse was centered exactly between the crescent tips, but on further blow up, I'm revising that.) Note also that for the upper tip, I am using the lined boundary to the area where the last red maples are planted. The actual red pixels on top start a tiny bit further back, which would move the midpoint up a little bit more towards the top of the copse. (At the bottom crescent tip, there is no lined boundary to the red, just the last red pixels.)


BACKGROUND: As best I can tell, the first person to note that the crescent is oriented towards Mecca seems to have been Etaoin Shrdlu. I found his graphic posted on Zombie’s site (via Michelle Malkin.)

I was working from that material when I came across SarahW's qibla overlay. I had already found an alternative online mapping resource that also verifies Shrdlu's thesis. Andrew Gray has an online great circle calculator. Click on Washington D.C. (Philly is not available on Gray's calculator)and on Riyadh (as close to Mecca as Gray supports). The heading from D.C.? 50 degrees.

This looks to be a pretty close match to the direction on the National Park foundation graphic. A line from the copse through the "3" at the center of the crescent's circle is about five degrees flatter than a 45. That makes it about 50 degrees down from north(the way that as degrees on a compass are read).

Sarah's graphic is more accurate still, since the qibla site calculates the direction to Mecca from a particular town.

When I extended Sarah's line in my paint program, it seemed to cut the copse just a bit above center, as Voice of Reason's calculations seem to verify. If anything, this minor deviation from the perfect symmetry of the Islamic flag only reinforces the conclusion that the Mecca direction is intentional? Why? Because to think it matters if the copse is cut dead center or not, you really have to be a qibla.

More seriously, if I print out a screenshot of the site plan, and draw a line from the center of the crescent's circle through the midpoint of the copse, it comes out 51 degrees east of north. Voice of Reason calculates the Mecca line at 54.58 degrees east of north. That puts the copse line three and a half degrees off the true Mecca line, out of the approximately 14 degrees of arc that the copse spans. Given that the copse is indistinct, instead of a point, that's pretty darned close to the exact Mecca line.

In sum, not only is the Crescent of Embrace oriented precisely on Mecca, but it's copse of trees is located almost precisely at the location of the star on an Islamic flag, making for a complete Islamic flag oriented on Mecca. It seems that someone at Paul Murdoch's architecture firm is trying to plant an Islamic flag on the bodies of our dead heroes. Is is an Islamo-fascist coup? Or Michael Moorish moonbattery?

I now have a second post on the Crescent up.

Comments:
Just to be clear, I didn't uncover the orientation of the crescent; I merely made a diagram illustrating it. I don't know who first noticed it. I learned about it in comments on a post at LGF.

Well, we should track down the wiseacre who got the ball rolling and give him the Buckhead treatment. That graphic you did was key for spreading the word (with thanks to Zombie and Michelle). Excellent idea.

In the same vein, I'm sure I saw someone make the copse-star connection before I came across it on Salamander's site, but I can't rememher if it was a post or a news story or a comment somewhere.

I know Junkyard Dog Blog linked off Michelle Malkin's original post was the first place I saw predict that it was specifically designed to be an American mini-Mecca and not just a bad choice of shapes. That made me think to figure out if he was right by checking the orientation to Mecca. Unfortunately I didn't know how to do it.

Such wingnuttery! Such bullshit.

Yeah, go take that evil Islamofascist landscape architect and impale him on your swords of righteous wingnuttery.

This reminds me of Louis Farrakhan's obsession with the Washington Monument and numerology. You can find patterns in ANYTHING if you try hard enough.

I'm looking at the Washington Monument and beyond it to the Lincoln Memorial. And, beyond that, to the left, to your right, the Jefferson Memorial. Abraham Lincoln was the 16th President of these United States and he was the man who allegedly freed us.... There, in the middle of this mall is the Washington Monument, 555 feet high. But if we put a one in front of that 555 feet, we get 1555, the year that our first fathers landed on the shores of Jamestown, Virginia as slaves.

In the background is the Jefferson and Lincoln Memorial, each one of these monuments is 19 feet high. Abraham Lincoln, the sixteenth president. Thomas Jefferson, the third president, and 16 and three make 19 again. What is so deep about this number 19? Why are we standing on the Capitol steps today? That number 19 -- when you have a nine you have a womb that is pregnant. And when you have a one standing by the nine, it means that there's something secret that has to be unfolded.

Chimp said: "You can find patterns in ANYTHING if you try hard enough."

Apparently some people are capable of NOT finding anything, if they try hard enough.

"So WHAT if it points exactly at Mecca? So WHAT if the copse sits in the exact spot of the star on an Islamic flag? You can't MAKE me see anything I don't want to see. Nyah nyah nyah nyah."