Is Obama following the Carter strategy of fomenting unrest, then sitting by as America's enemies take over?

Then we stand by and let America's enemies come to power in the aftermath. See "Clinton on Egypt: 'We're not advocating any specific outcome'."

Just as Carter did in Nicaragua and Iran. Undermining a stable but unpalatable ally COULD be tenable, but not in the absence of any plan or effort to guide the nation towards a superior alternative. So instead of the Shah and Somoza, we got the Stalinist Sandinistas and the Islamofascist Ayatollah. This time we could well get the Muslim Brotherhood (the parent organization of al Qaeda). 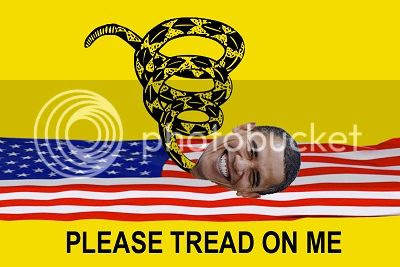 Obama already propped up the Islamofascists in Iran

In the wake of Iran's stolen 2009 election, Obama said that the future of Iran had to be decided by Iranians, but he did not say it had to be decided by legitimate election. On the contrary, he called for letting the regime's legal process decide the matter and only asked that the Islamofascists try not to kill too many people in the process of enforcing their election theft:

My understanding is, is that the Iranian government says that they are going to look into irregularities that have taken place. ...

Whatever the outcome of the election conflict might be, Obama expressed his determination to proceed with diplomatic engagement (i.e. with friendly concessions). To justify all this passivity, Obama invoked the assumption that the whole world hates America as much as he does. If we took the side of the Iranian people, it would only de-legitimize their cause:

I want to start off by being very clear that it is up to Iranians to make decisions about who Iran’s leaders will be; that we respect Iranian sovereignty and want to avoid the United States being the issue inside of Iran, which sometimes the United States can be a handy political football...

Thus obama left the field to the Islamofascists, insuring the failure of the side we should have backed: the Iranian majority.

Now after a public-private consortium of his own minions has helped to undermine the a psuedo-ally in Egypt, Obama seems to be doing the same thing. America will stay out of the aftermath (can't make ourselves the issue!) again leaving the field to the Islamofascists. Unlike Iran in 2009, the Islamofascists are not the challenged regime this time, but are one of the challengers: a small but organized sect, poised to steal the regime change, just as the Nicaraguan communists managed to do with Carter's help/acquiescence in 1979.

Carter's post-presidential career proves he favored the communists all along

Time has revealed Carter's post-presidential career as an elections monitor to have been in pursuit of legitimately elected Communism. I can't find the citation, but I once read a report from someone on the scene in Managua when Sandinista presidential candidate Daniel Ortega was defeated by Violeta Chamorro in the Carter facilitated Nicaraguan election of 1990. Carter reportedly spat a stream of the most bitter vituperation over the Communist defeat. The closest reference I can find is this statement from Steven Hayward that "Carter returned to the U.S. bitterly disappointed that his Sandinista pals had been turned out."

Since then Carter has given up on achieving a legitimate communist electoral victory and has become a shameless backer of communist election stealing. (Ibid.)

If Obama acquiesces in the rise to power of Muslim Brotherhood favorite El Baradei, it will be pretty clear that he is indeed pursuing the Carter strategy for advancing America's enemies.

UPDATE II: I see that Ann Althouse put out a call last week for Obama-cized Gadsen flags. I like Hazy Dave's: 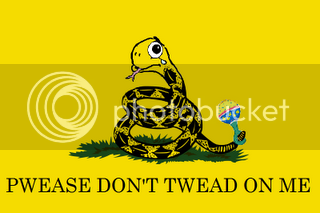 Is there STILL too much recent warming to explain by solar activity?

If you are not familiar with Watts Up With That, click on over to see my latest post on the phony science of human caused global warming. It critiques the numerous solar scientists who claim that, because solar activity had no upward trend since the 1970′s, solar activity cannot be the cause of post-1970′s warming.

Actually, solar activity from 1940-2000 was the highest since 9000 BC. Most solar scientists accept that there is a close correlation between temperature and solar activity over the geologic record, so they accept that high solar activity must create a temperature forcing, but they are at the same time trying to claim that steady peak levels of this forcing CANNOT cause warming. Only if the levels KEEP going up can warming be created.

That’s impossibly stupid. It’s the same as saying that you can’t heat a pot of water by turning the burner all the way to maximum and leaving it there. No, you have to gradually turn the heat up, as if it is the act of raising the level of the flame that heats the water, rather than the level that the flame is raised to.

Alternatively, they could be silently assuming that global temperature had already equilbrated to grand maximum levels of solar forcing by 1970, so that continued grand maximum levels of solar activity should not have caused further warming, but none them has ever stated such an assumption, or made any kind of argument for it, and how could they, when the only thing we know about long term equilibration to altered forcings it that it can can take a long time, as with the centuries of warming from the depths of the Little Ice Age (when solar activity was very low) until 2000. There is no basis for arguing that these hundreds of years of natural warming had to have reached equilibrium by 1970, and a scientist certainly cannot proceed on this assumption without arguing for it.

My post shows just how many solar scientists are invoking this stupid-science as a way to say that modern warming must be due to some other cause than the sun, something like CO2 perhaps, as the people who control all the research money insist. Stupid AND corrupt, though I tone down my language a bit for Mr. Watt’s sake.