Senator Lugar: Congress should give the terrorists the victory that they cannot win on the battlefield

Senator Lugar (R Indiana) says the war in Iraq cannot be won because Congress does not have the staying power that al Qaeda and Iran do:

The prospects that the current “surge” strategy will succeed in the way originally envisioned by the President are very limited within the short period framed by our own domestic political debate. [Full speech here.]

Faced with this "reality," Lugar has come out in favor of withdrawal from Iraq. He wants America to declare defeat.

Lugar speaks as if Congress' lack of staying power is some force of nature, instead of a reflection of the weakness of elected representatives like himself. This is expected on the Democrat side. The Democrats have made abundantly clear that they seek American defeat in Iraq because they think it will be to their domestic political advantage.

The Iraq war is “lost” and the Democrats will “pick up Senate seats” because of it, says Senate Majority leader Harry Reid, as he works feverishly to de-fund the war in time to insure these outcomes.

Republicans are supposed to be the opposition. Our troops in Iraq depend on the Republicans to stop the Democrats from pulling the rug out from under them, but instead of fighting this home-front battle, Lugar simply declares defeat. "The Democrats are going to win," he is in-effect admitting, "so we might as well throw in the towel now."

We did not elect our Republican representatives to unilaterally surrender to the Democrats. We elected them to oppose the Democrats.

Voinovich (RINO OH) has joined Lugar in demanding that Iraq be surrendered to our enemies. As reported by McClatchy Newspapers:

Iraq's Shiite majority would reject any Sunni al-Qaida effort to set up a religious government under a supreme leader, he said.

Moron. Doesn't he know that we are fighting both al Qaeda and Iran in Iraq? If we leave, the country will be divided up between the two of them. Yes, the Shiite radicals will likely exterminate the Sunnis and create a second Iran. Some "nonsense."

"The growing stress on our military"

As for Senator Lugar's contention that we need to withdraw from Iraq because "the consequences of continuing to stretch the military are dire," there is a ready answer. Dramatically increase the size of our military, which is tiny compared to our mobilization in any other war. Yet Lugar just says that the kids these days don't want to fight, so our only alternative is to lose.

Senator Lugar is good enough to post a regular email address instead of the cumbersome contact form erected by most elected representatives to make feedback more difficult. I recommend sending him a firm but courteous note. Use mine if you want:

While our troops are fighting in Iraq, you have apparently surrendered on the home front to the Democrats’ objective of securing American defeat in Iraq. Here are your words:

"The prospects that the current 'surge' strategy will succeed in the way originally envisioned by the President are very limited within the short period framed by our own domestic political debate."

What is this but a declaration that Republicans cannot stand up to the Democrats’ drive for American defeat? The time frame for our domestic political debate is controlled by YOU and our other elected representatives. You are declaring your willingness to let our terror war enemies win in our own Congress what they cannot win on the battlefield in Iraq!

Hagel, Warner, Collins, Brownback, Specter, Snowe, they are all Surrendercrats now. Add Lamar Alexander and Judd Gregg, Republican senators from Tennessee and New Hampshire, to the list. Are they really unaware of the astounding progress we have made in getting Sunnis to unite in their opposition to al Qaeda? Anbar is won. Diyala is well on the way to being won. All we need to to now is move out from the beach-head and take out Iran.

J.D. Johannes has posted a more thorough critique of Lugar's speech over at NRO.

More commentary by Fred Barnes at the Weekly Standard.

Anyone looking for updates on my efforts to expose the planned Flight 93 Memorial as a terrorist memorial mosque, major new development here. 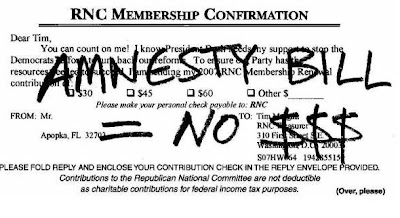