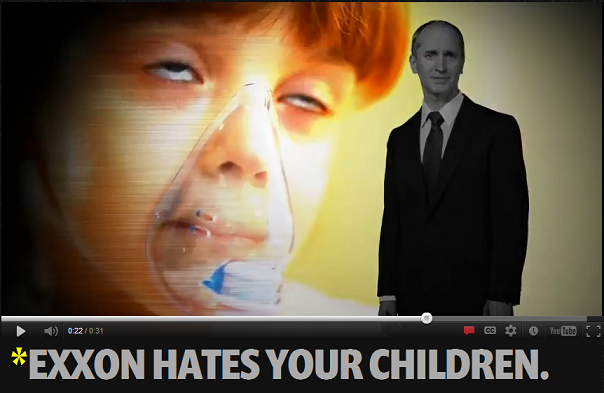 
Here at Exxon we hate your children. We all know the climate crisis will rip their world apart but we don't care, because it's making us rich. That's right, every year Congress gives the fossil fuel industry over ten billion dollars in subsidies. That's your tax dollars lining our pockets, making a fortune destroying your kids' future. At Exxon, that's what we call 'good business'.

The ExxonHatesYourChildren.com website was created by Andrew Boyd, an eco-leftist activist who was an originator of the class-war demagoguery of the Occupy movement. That's why Boyd's group is called "The Other 98%." Boyd got in early, before his Occupy comrades decided that 98 to 2 was not enough advantage and changed their slogan to "the 99%." These people have backing all the way to the top of the Democratic Party. New Massachusetts Senator Elizabeth Warren claims to have laid the intellectual foundation for the Occupy movement and Obama himself endorses it ("we are on their side").


Where are the REAL subsidies going?

Of course Boyd's demagoguery goes beyond his explicit appeal to class warfare. His group is also fabulously dishonest. When they (and Obama) claim that oil companies are getting billions in subsidies what they mean is that Exxon gets to take advantage of the same tax breaks that other businesses do in order to keep a bit more of the money they earned. Keeping your own money is not a subsidy.

Want to see some real subsidies? Check out Obama's bankrupt 33 (from The Heritage Foundation), with the amounts of direct taxpayer funding each received from the Obama Administration. The 19 asterisked companies have already filed for bankruptcy. The others are near bankruptcy:


As for "tax subsidies" (letting earners keep their money), the vast majority of those also go to "green" energy. From the Congressional Budget Office:

Since green energy is tiny compared to brown energy, the subsidy as a percentage of the industry is vastly larger for green energy than even this graph indicates. Heritage has run the numbers:


...wind energy companies, for instance, get about 1000 times the subsidies that oil companies do, per kilowatt-hour of energy produced.

Just for fun, somebody should ask some actual children what they would think of a character who tried to turn off the electricity and take away gasoline. It's like the villain in a superhero movie. And that "climate crisis" that is supposedly going to "rip their world apart"? Notice that Boyd et al. lack the conviction to even call it "global warming." Apparently they know full well that global temperature has not risen significantly in over a decade but are unwilling to relinquish the demagogic power that comes from blaming natural phenomena on their capitalist enemy.

Comments:
I simply wanted to thank you a lot much more for your remarkable site you've developed here. It can be full of beneficial ideas for those who are actually interested in this specific subject, mainly this really post.