Art show for children: "In this vision we have poisoned our environment with toxic waste" 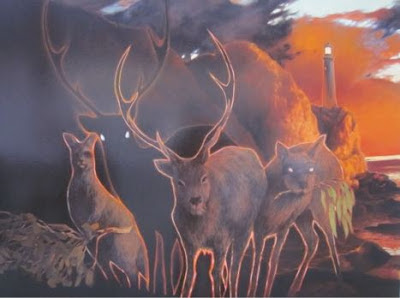 A venerable Aussie art gallery has gone over to the eco-propaganda dark side. An exhibition for children at the Ballarat depicts mankind's impending and well-deserved doom. In the illustration above, post-apocalyptic kangaroo, elk and wolf have "come for what's ours," narrated with the caption:


“In this vision we have poisoned our environment with toxic waste and used up all the natural resources until the earth could no longer support us… In this painting, people are just a memory. The earth has survived and with it some of the plants and animals which lived in harmony with nature, only taking what they needed and adapting…"

The poor wolf has apparently had to adapt to eating eucalyptus. Even wild animals are not eco-enough for the eco-religionists.

Check out how hot the outback was in this 1890 painting by David Davies. What better way to illustrate that "Australia is getting hotter and climate change has arrived"? 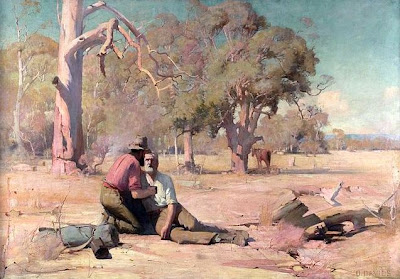 This -- cough cough -- turkey might be a little -- urk -- overcooked. Hope yours is better!

Comments:
The concept of "living in harmony with nature" is false. Nature is not harmonious, it just looks that way, because of the limitation of our short-term viewpoint (and other limitations): it's a self-serving illusion created by culture, not science, to make us feel better about the uncomfortable fact that everything is eventually destined for destruction, including this solar system and everything in it. It's just that we are not used to thinking in terms of billions of years, and our culture has developed a narrative that says that our purpose on earth is to live happily ever after, so we don't want to hear about how nature is at odds with itself, is in conflict with itself, and eventually destroys everything we know of, while at the same time generating new celestial bodies (which will also be destroyed, just like all the ancient stars that no longer exist).

Attractive component of content. I simply stumbled upon your site and in accession capital to say that I acquire actually enjoyed account your weblog posts. Any way I’ll be subscribing to your augment and even I success you get admission to consistently fast.