War BY women follows the pattern of affirmative racism


The Democrats have always been the party of racism. Long after fighting on the wrong side of the Civil War, they provided the bulk of the opposition to the civil rights movement and the ending of the web of Jim Crow segregation laws. Then as soon as they lost the battle for anti-black racism the party immediately switched to anti-white racism with its embrace of affirmative action (the race-conscious favoring of blacks in hiring and promotion). Their one constant: they never gave liberty a chance.

Now they are following the same path with feminism. "If you don't buy me $18,000 worth of birth control it's a WAR AGAINST WOMEN," says Sandra Fluke and her sponsors in the Obama campaign: 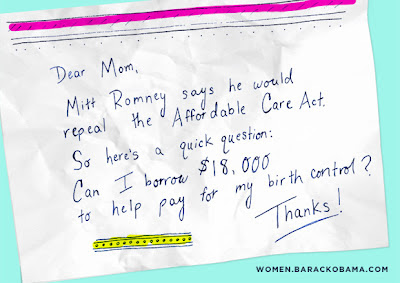 Sorry girls but trying to force taxpayers to provide for your outsized birth-control consumption is a war BY women, and yes, this really is politics as a substitute for war because the issue is force. That is what laws do. They use the state's monopoly on force to coerce individual behavior. Sandra and her ilk are trying to achieve a tyrannous majority, trampling the rights of others, grabbing other peoples' stuff for themselves.

But there is a problem even for the Sandra Flukes of the world with using the Orwellian language of "war on women" for a war by women. When you accommodate to these perversions of language it becomes impossible to think straight about the issues involved. Remember the wisdom of Confucius: "When words lose their meaning, people lose their liberty." That is doubly true when the words whose meanings get perverted are our words for liberty, and liberty is important even for women.

Democrat discombobulation over liberty is evident in another of barackobama.com's e-cards for women. Check out this woman-voiced claim that "control of our own health care" comes from submitting to the paternalistic system of government-run medicine that is Obama-care: 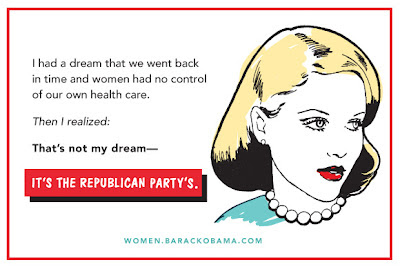 Are Democrat women actually stupid enough to fall for this? Do they really think that having government choose what health care they receive will give them more control than when they were free to choose their health care for themselves?

Of course Democrat women are stupid enough to fall for this, but only because they have lobotomized themselves by uncritically embracing whatever seems to support what they take to be their side. They are choosing to be stupid and there is no limit to how stupid a person can choose to be. They will give up all control but think of it as being in control because they are choosing to give up control. Brilliant (Democrat style).

To have any chance of pulling Democrat women off of this pitch for paternalism as a feminist utopia it is necessary to work around the Democrats' backwards-thinking cognitive style. Instead of following reason and evidence to arrive at conclusions they start with their conclusions and seek ways to avoid and dismiss any reason and evidence that seems to militate against "their side." Pointing out how stupid it is for Democrats to think that liberty is slavery has no effect because you are denigrating their side (the Democrats) and they are self-programmed to hate and ignore anything that denigrates their side.

But if you phrase it differently, if you point out that the ad denigrates women by depicting them as stupid enough to think that paternalistic socialist control of medicine is liberating (with 1950's-style ad copy as a lure no less), then you might be able to get these women's grotesque female bias to work against and cancel out their grotesque Democrat bias.

The fog clears and, for a rare brief moment, they are able to observe reason and evidence: "Hey wait a minute. Paternalism isn't liberty!"

... Until the next opportunity for anti-conservative bigotry comes up. Then they'll be back to full stupid again.

Hey all you mainstream Democrat leftists: to be conservative in the land of liberty is to value and fight for liberty, and if you're not down with that then you are scum. Observe that, while your minds are momentarily un-befogged.

Comments:
Liberals seem to believe that freedom and equality go together, or at least pull in the same direction. But when you consider that "equality" means "sameness" (on some level which must be defined), then it becomes clear that freedom and equality pull in OPPOSITE directions: to get more freedom, you need less enforced equality. Or, some people prefer enforced sameness as the supreme value: they are called communists.