Roberts' job is to protect the Constitution, not the Court

"It is not our job to protect the people from the consequences of their political choices," said Chief Justice Roberts in summing up the Court's upholding of Obamacare (at 10:25 in the ABA transcript). Wrong. It most assuredly is the job of the Court to protect the people from their own political choices when those choices violate the Constitution, and if the Court fails to do this—if it instead decides that it should stay out of contentious political issues in order to remain above the fray and keep its neutrality from being questioned—then it has to find some way to read the Constitution so as to declare the clearly unconstitutional as constitutional, and this is exactly what Roberts did.

Faced with an opportunity for the Court to finally draw at least one very belated line on the limits to the federal  government's post-New-Deal power under the commerce clause—that the government cannot actually force citizens to purchase products that they do not want to buy—Chief Justice Roberts chose instead to kick flat a second barn door to unlimited federal power, overthrowing a long standing prohibition on the use of taxation as a means of punishment for breaking the law.

"Because the Constitution permits such a tax," said Roberts, "it is not our role to forbid it, or to pass upon its wisdom or fairness." No, the Constitution most certainly does not permit such a tax. The dissent of Justices Scalia, Kennedy, Thomas, and Alito is authoritative. Robert's position is an abomination:

Our cases establish a clear line between a tax and a penalty: “ ‘[A] tax is an enforced contribution to provide for the support of government; a penalty . . . is an exaction imposed by statute as punishment for an unlawful act.’ ” . . . In a few cases, this Court has held that a “tax” imposed upon private conduct was so onerous as to be in effect a penalty. But we have never held—never—that a penalty imposed for violation of the law was so trivial as to be in effect a tax. We have never held that any exaction imposed for violation of the law is an exercise of Congress’ taxing power—even when the statute calls it a tax, much less when (as here) the statute repeatedly calls it a penalty.

Roberts did not "gut the commerce clause," or limit in any way the vast unconstitutional expansion of federal power under the New Deal Court

Roberts' refusal to justify Obamacare by creating even further expansions of the commerce power is part of the dicta of Roberts' Obamacare opinion, it is not acta. That gives it little precedental value. Stare decisis applies to acta (the actual basis on which the ruling was made) not dicta (mere commentary on other matters).
Numerous commentators,  right and left, are claiming that it was some kind of brilliant conservative strategy for Roberts' to keep his head down while finally laying in some post-New-Deal limit on the commerce clause (infinitely weaker than the founders intended), but I'm with Professor Jacobsen: anyone who thinks that adding an unlimited federal power to tax for the general welfare to the existing nearly unlimited federal power under the commerce clause is a double fool.

There may be some current political advantage to Republicans in leaving it to Congress to overturn this deeply unpopular law but for the preservation of our Constitution it is an unmitigated disaster and the longer term political consequences are equally devastating. In practice, a main application of unlimited government power is the buying of constituencies, the effects of which are often transformative.

Social Security is clearly unconstitutional. If it takes an enumerated power to establish the Post Office then it must require an enumerated power to enact the socialization of retirement, but once allowed by the Supreme Court it is very hard to overturn politically, no matter how much damage it is doing. Social Security is aptly labeled "the third rail" of American politics. Old people have been bought,  fundamentally perverting our republican system of government. The people are supposed to be the masters, government the slave, but the slave went and bought the masters.


Nothing would be more transformative than Obamacare which as Professor Jacobson puts it: "empowers the federal government to write tens of thousands of pages of regulations telling us how to live and how to die." In addition, it is designed to unionize a full seventh of the economy, creating a vast fundraising apparatus for a traditional Democratic Party constituency. Quoting the good professor again, "this was the hill to fight on for any conservative Justice of the Supreme Court."

Note also that if keeping the court out of big important political questions is embraced as a conservative standard of jurisprudence,  it amounts to unilateral disarmament. The left doesn't believe that the Court should stay out of big important political questions. Just the opposite, they believe that progressive justices, acting as philosopher kings, can lead our backwards electorate in a better direction than its base nature would otherwise follow.

To oppose the imposition of such "evolving standards of morality" from above conservatives on the Court need to strictly enforce the Constitution as written, so that if change is to come to the Constitution it will not to come from above, "living Constitution" style, but from the people.

Roberts caved to political pressure, the ultimate failure for a Supreme Court Justice

The wording of the opinions pretty much proves that Kennedy's dissenting opinion was originally written as the majority opinion, indicating that Roberts switched his vote at the very last minute, leaving insufficient time to do much more than re-label the majority a dissent. That late switch indicates that Robert was responding to the flood of highly inappropriate threats directed at the court by President Obama himself and by his backers, charging that the overturning of Obamacare would de-legitimize the Court.

Obama's personal attack went so far as to deny the principle of judicial review:

Ultimately, I’m confident that the Supreme Court will not take what would be an unprecedented, extraordinary step of overturning a law that was passed by a strong majority of a democratically elected Congress.

Since then, the threats and warnings from our Democrat-controlled media and the left-wing elites that dominate our law schools have steadily become even more hysterical. Roberts apparently knuckled under to this political pressure, which is the definitive failing for a Supreme Court Justice. If he can't stand the heat he shouldn't be in the kitchen.

Roberts has clearly established an ultra-cautious approach to Supreme Court jurisprudence so the threats that were being leveled went right to the core of his weakness. Having the Court step in and decide a hotly contested political issue would leave the Court open to accusations of meddling in the business of the "political" branches and weaken its standing as a neutral arbiter of the law. When these arguments were posed as direct threats Roberts acted as if his job as Chief Justice is to protect the Supreme Court from the threats against it, but it bears repeating: that is not his job.

It was the greatest betrayal in American history and now Roberts has done it again. The man is unfit for the job and if Romney is elected president his first appointee to the Court should be named as Chief Justice, demoting Roberts to associate. My prediction going forward is that Roberts will over time become a thorough-going man of the left, not out of any conviction, but to create a dignified pretense that his turn to the left on Obamacare was not an act of cowardice. 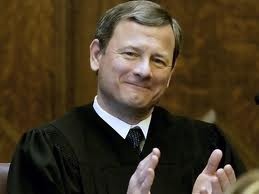 Our Constitution could have been saved. Now it is going to have to be re-written with its limitations on government power stated in the most explicitly narrow terms. The power to tax for the general welfare will have to be stated explicitly according to 's interpretation, that it only empowers the federal government to tax as necessary to fund "necessary and proper" exercises of the enumerated powers (ditto for the "necessary and proper" clause).

For the interstate commerce clause, we'll have to state explicitly that it is only intended to give the federal government the power to stop the individual states from engaging in protectionist policies. It does not give the federal government power to regulate things merely because they affect interstate commerce, no matter how greatly (and certainly not no matter how minutely). Neither does it give the federal government the power to address "coordination problems" more generally. "Coordination problems"—like having the states compete to have the lowest taxes and create the best business environment, or having them face the consequences of offering relatively promiscuous welfare benefits—are not actual problems. They are a feature of our federalist structure, not a bug.

And on down the line. We have had 200-plus years to find where the Constitution was not written clearly enough to contain the drive for expanded federal powers that it sought to contain. Weld every leak shut and hope it can last another 200 years, all of which would leave a greatly diminished role for what remains of the Supreme Court, charged only with beating back every attempt of the government to expand its powers. The people's representatives must be ordered at every turn that if they want to legislate beyond the narrowly enumerated powers of government they will have to pass amendments to that effect, the way our republic was always meant to work.


UPDATE: The perception that Roberts' saw himself as trying to protect the Court from accusations of partisanship is getting wide traction. Krauthammer wrote an entire piece on this premise , though he seems to lean towards the idea that this was clever on Roberts' part. I also see that W's attorney general John Yoo has a piece in the Wall Street Journal comparing Roberts to Chief Justice Charles Evans Hughes, who knuckled under to the pressure of FDR's court packing scheme (the justice whose "switch in time that saved nine"). Unlike Krauthammer, Yoo gets to the heart of the matter:

Hughes sacrificed fidelity to the Constitution's original meaning in order to repel an attack on the court.

Hard to imagine how a supposedly conservative Justice could think that was the model to follow.

Thank you, this was a great analysis, and I was surprised by the powerful counteroffers at the end. (: