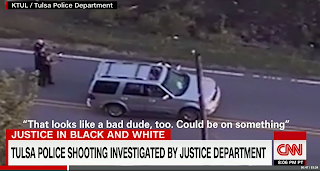 Comments:
I see movement of Crutcher's arms, but, viewing from the helo's perspective, I can't tell whether any such movements are inside the driver's window (or outside of it but viewed through the window, which may be rolled up or down). Crutcher is wearing a white t-shirt, so if he reached into the driver's window with his forearm only, you would not see anything white reaching inside the vehicle. The resolution seems to coarse for me to see what he is doing. He may be reaching through the open window, I just can't tell. I watched it about 5 times near the 47-second mark.

I think the strongest arguments in support of Officer Shelby are that Crutcher was extremely uncooperative every step of the way (and each step of the way, that increases the danger to the officer): he did not raise his hands to cooperate (he was not ordered to raise his hands at all, only to take them out of his pockets). Walking toward his SUV was another act of non-cooperation. The shifty body movements once he arrived at his driver's window did not help, especially after he had ignored all commands. With his loose t-shirt, he positioned himself sideways to the officers: he could be preparing to pull a concealed pistol from his left hip. I thought this article was interesting, with some of Officer Shelby's comments, as well as the 6-minute video from her lawyer:

And I learned a lot from reading this long article by a Tulsa police detective about this case: http://lawofficer.com/2016/09/detectivetulsa/