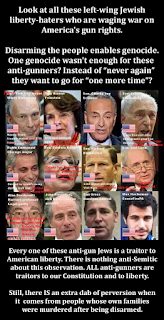 Comments:
I think your version of the picture with the 12 anti-gun Jews is certainly excellent, but perhaps useless (because the anti-gun side is not arguing in good faith, and is not evaluating the subject at hand).

I recently read a pro-gun article on townhall.com. I don't remember a single thing from the article, except for an absolutely amazing reader comment, below the article, that really helped open my eyes on gun control (and on the larger goal of progressivism). That comment explains how progressives simply do not care about disarming criminals (because that would interfere with a higher-ranking priority) and, by extension, I think it explains why, when progressives attack a person as "anti-semitic", it may have nothing whatsoever to do with anti-semitism:

"NielsZoo • 13 days ago
Mr. Bialosky, you misunderstand the Progressives' goal for gun "control." They are not lazy or sloppy with their demands. Their goal is not to limit criminal possession of firearms or for that matter any weapons. That's as impossible to achieve as eliminating crime. The goal is the disarmament of the law abiding citizen. They know from history that no population would voluntarily submit to government apparatchiks running every aspect of their lives while said apparatchiks, bureaucrats and politicians enjoy freedom and choice. That's the goal of Progressivism... a tyrannical oligarchy who makes all those "hard" decisions because people can't be trusted to make the "right" choices. That's why every totalitarian government has first disarmed the people. Do not fall into the carefully crafted trap of believing that these lefties are pushing policies to reduce crime. They've got to have crime to justify more intrusive government and can't have an armed population getting in the way while they decide which rights they think the proles should have."

Hi Max. You and Neils are certainly right about the Democrats not wanting to lower gun crime. Whenever and wherever Democrats get into power gun-crime prosecutions fall off a cliff, and this is quite overtly purposeful. They want more rather than less gun crime because demagogueing about gun crime is their source of leverage for trying to gain the government monopoly on power that is their actual goal.

One of the clearest examples is the running battle that the NRA had to fight against the Clinton administration over "Operation Exile." This was a program promoted by the NRA and pro-NRA legislators to institute systematic enforcement of the federal mandatory five year penalty for felons in possession of a firearm and for crimes against people and property that are committed with guns.

Wherever Operation Exile was implemented gun crime dropped to practically zero and Clinton was desperate to keep it from being enforced for exactly this reason. It deprived him of the high rates of gun crime he needed to make his case for yet more gun control laws (focused, of course, on disarming the law abiding citizens).

Interesting what you said about Operation Exile. I don't really know anything about Jews and firearms ownership, except that you would think that Jews, of all people, would be pro 2A and pro NRA. But apparently, it is not that simple, because I just remembered that there is an organization called "Jews For The Preservation Of Firearms Ownership", so I looked at their website, and there is a letter, from their founder & director, to Ted Nugent, explaining all the reasons why he, the director, is not an NRA member:

That is a bizarre letter from JPFO founder Zelman on why he won't joint the NRA. Reasaon 1: because the NRA doesn't acknowledge that the police have no legal duty to protect anyone. Of course they acknowledge that, with great regularity. What an ignoramus this guy is.

So no partial steps? We can't defeat Germany by first driving them out of France? The D-Day landing was pro-Hitler? This guy is a flaming imbecile.

And that is as far as I am reading. I suspect that JPFO is actually a one man operation pretending to be a RKBA group. Maybe Zelman has been disqualified from getting a carry permit by virtue of having been declared mentally incompetent and thinks that constitutional carry will allow him to get around his disqualification.

I can read about nugents blistering critique of jewish from a dissertation paper submitted by best dissertation writing service . The paper clearly describes its both good and bad side.