Members of a Colorado high school "CulturalArms Club" recently demonstrated how well they have learned the lessons of political correctness by leading their school in a recitation of the Pledge of Allegiance in Arabic. The problem, as Fox news notes, is that:

CAIR spokesman Ibrahim Hooper (CAIR is a front group for the Muslim Brotherhood, which is the parent organization of al Qaeda), tried to pretend that "Allah" is a generic term for "god" in Arabic, not a specific reference to the supposed god of Islam:

A very clever deception. What Hooper is not telling you is if Arab Christians tried to distinguish their god from the Muslim god they would be put to death. That is because a fundamental tenet of Islam is that the Muslim god is the Christian/Jewish god. Muhammad's whole gambit was to usurp the established spiritual authority of the Christian and Jewish religions by offering Islam as God-of-Abraham 3.0.

Arab Christians live as "dhimmis" in the Muslim world, a form of third class citizenship where they can be put to death for the smallest transgression, while blasphemy is considered the highest transgression. They are being forced, against their will, on pain of death, to acknowledge what they don't believe: that Muhammad is a prophet of the same God as Abraham and Moses and Jesus. If they believed it they would be Muslims, but they don't believe it, only they can't say so.

Hooper wants us to accept the forced Christian failure to distinguish their god from the Islamic god as proof that "Allah" is a general term in the Arab world for whatever god one believes in. Absolutely false. It is a specific and exclusive reference to the Muslim god and anyone who even suggests that there even could be a different god is liable to be put to death, not just in every Arab country, but in every Muslim country. Thus to insert "under Allah" into the Pledge is to assert the Muslim doctrine that their god is indeed the same god embraced by Christians and Jews. It is an assertion that Islamic belief is correct.

This bait-and-switch on the Arabic meaning of "Allah" is an interesting and important example of how easily the politically correct left is duped by Islamic deception. Political correctness is a doctrine of willful blindness, looking away from any telling critique of non-Christian, non-white, non-male society. Such "others" are presumed to have been discriminated against by the white male Christian power-brokers that created the modern world and in compensation we are now supposed to discriminate in their favor by presuming the best about them at every turn. Their supposed victimization makes them unalterably innocent, otherwise we are "blaming the victim," and the "Cultural Arms Club" captures this spirit perfectly. Their goal is to "destroy the barriers, embrace the cultures," without regard to what those cultures are.

Embrace Islam? Really? What an educational club should actually be doing is not embracing Islam but learning about it. Lesson 1: a fundamental tenet of Islam is the saying of Muhammad that "war is deception." (Al-Tabari, Vol. 8, p. 23.) This in a religion that calls the non-Muslim world "dar al harb," or "the world of war." They are supposed to lie to us. That is why Hooper pretends that Allah is a general term for anyone's god in Arabic when it is in fact an exclusive reference to the Muslim god, on pain of death for anyone who would proclaim any other god.

If this school really wanted to promote "cultural understanding," that is what they would be teaching their students: that if they use "Allah" as a term for god they are submitting to Islam, accepting that the Christian god and the god of Islam are one and the samed. They are becoming dhimmis to the religion of submission (the Arabic meaning of "Islam"). So where are the teacher advisors to this club when the students get something so basic wrong as the meaning of Allah in Arabic? Egging them on of course. Our politically correct government run schools are schools of misinformation wherever ideology is even tangentially related.

We can't blame the kids. They are being indoctrinated. But soon enough they will be adults and then they will be culpable, having had enough years under the maturity of their faculties with which to discern the fraudulence of their government educations, and if they don't wake up, they will spend their lives on the side of evil.

The Pledge of Allegiance is a pledge to support "liberty and justice for all." The Colorado Kidz think that:

“No matter what language it’s said in, pledging your allegiance to the is the same in every language.”

No it isn't. Not when the Arabic word for god specifically asserts, according to Sharia law, that the god of Islam is also the god of Abraham, Moses, and Jesus. But the error is even deeper than that because the Islamic religion that is implied by the use of "Allah" is fundamentally incompatible with the "negative liberty" that is the great American achievement: liberty from interference.

In any "one nation under Allah" the only "liberty" that would be possible is the communist brand of "positive liberty," where people are only seen as free when they are liberated from the immorality of acting contrary to communist ideology/ Islamic law.

The contrast between Christianity and Islam on the basic value of liberty could not be more extreme. "Christian liberty" is where American liberty came from. It expresses the teaching of Paul in 2Corinthians 3:6 where he says that Christians are now to live by the spirit of the law (the law to love your neighbor as yourself), instead of by the letter of the law (the Old Testament), whose laws are henceforth to be regarded as rule-of-thumb guidelines for an earlier condition of man that was not yet ready to be guided directly by the spirit of the law.

Even the Ten Commandments are to be regarded as rules-of-thumb that imperfectly capture the spirit of the law and can give way in those instances where they do not manage to capture what the law of love requires, as when Jesus justifies his "working" on the Sabbath (performing healing miracles). You don't fail to save a life on account of what day of the week it is: "If your son or your cow falls into a pit, don’t you rush to get him out?” The unspoken general principle is that you work on the Sabbath when love requires it, and the same for every other lettered law. We still need the written law as a guide to help us find the spirit of the law. It tells us where the spirit of the law mainly treads, but the Christian ideal is to find and follow the spirit, not the letter.

This fits with the common Judeo-Christian view, going back to Genesis, that man must be free to make his own choices because he is made in God's image, and God has freedom of choice. This is the ideological foundation of American liberty. It came from Judaism and Christianity, which then went on to end slavery, not just in , but with the prompting and help of Christian England ended slavery across the entire world except for parts of the Muslim world and the . European America was born a part of the old world with all of its gross violations of liberty, including slavery, but thanks to Christianity it became the instrument for largely ridding the entire world of these ancient wrongs.

Islam, in contrast, is a totalitarian religion, striving to specify halal and haram (the required way and the disallowed way) for every detail of human existence. The Islamic view of liberty is accurately stated by those signs that are commonly carried by angry jihadists and their niqabed women in Londonistan: "Freedom go to Hell!" 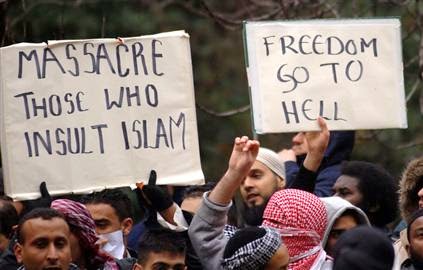 Not all Muslims are immoral. It is orthodox Islam that is at war with Western liberty and until recently much of what had become traditional in Islam since the fall of the was decidedly NOT orthodox. Don't confuse traditional Islam, or cultural Islam, with orthodox Islam. The orthodoxy was in broad remission until it flooded back across the Islamic world on a sea of Saudi oil money, approximately $100 billion since 1970, funding the rise of Saudi Wahabbism to its current dominance. (Osama bin Laden was a perfectly orthodox Wahabbist.)

Many Muslims, maybe most, are not happy with the ascendance of Wahabbism in the Sunni world and the similar ascent of Khomeini-ism in the Shiite world, but roughly equal numbers are vocal or silent backers of the Wahabbist/Khomeini-ist murder cult. Post 9/11 polling consistently showed bin Laden to be the most admired figure in the Islamic world.

Add the Islamic command to lie about Islamic intentions and it becomes extraordinarily difficult to distinguish moral from immoral Muslims. Instead of politically correct willful blindness what is needed is doctrinal knowledge. One basic law in Islam, accepted by all branches except for the persecuted Ahamadiyya, is that apostates must be put to death, which is flat out murder. You can't get more antithetical to liberty than this: killing people for adopting a different religious view than you have. Talk about state establishment of religion.

This makes a handy litmus test. If a Muslim tells you that there is freedom of religion in Islam and that Muslims can freely convert to other religions then you know that he is an orthodox murder-cultist, engaged in religiously commanded deception. If a Muslim acknowledges the Islamic death penalty for apostasy and says that it is wrong and needs to be changed then he is a moral muslim who needs your friendship and protection because he is putting his life at risk every bit as much as Hirsi Ali. She's an apostate while a person who rejects settled sharia law is a blasphemer. Both are subject to the death penalty across the entire Islamic world.

The Kulture Klub Kidz are taking comfort from Ibrahim Hooper, who is full-on Muslim Brotherhood, which is ideologically identical to al Qaeda. The Brotherhood has a propaganda wing and an armed wing. Distinguishing Hooper from bin Laden is like trying to distinguish Goering from Himmler. When these kids let themselves be duped by the Brotherhood they are abandoning the moral Muslims who the Brotherhood is out to destroy. The Klub is not a force for conciliation but is letting itself become a tool of the Brotherhood's program of enforced submission.

What high school students need is real education, not politically correct demagoguery. For their own sakes they should begin with an honest investigation into the actual meaning of "Allah" in modern Arabic. Anyone in the Arab world who says it refers to any god other than the god of Muhammad is putting his head on the chopping block. Do these students doubt it? All they need to do is ask around.  Then they will find out who is who.