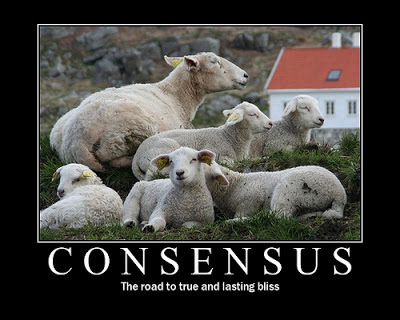 Crossposted at WUWT (with some improvements here to the intro and postscript)
After finalizing a long post on John Cook’s crowd-sourced consensus-rating survey (to be titled “I take Cook’s survey so you don’t have to”), I submitted my completed survey to Cook’s website and received an automated response that included a key new bit of information, suggesting what likely shenanigan Cook has planned.
I am not going to rewrite the post because it describes why I gave the ratings I did to each abstract in the random survey that Cook’s website compiled for me. The likely shenanigan has to do with how the rating rules are applied so I want it to be clear that what I wrote on that subject was innocent of any awareness of how Cook might be biasing the survey. I am just adding this brief introduction.
The new information (new to me) is that Cook seems to be claiming to have in his back pocket a correct answer to what each of the ratings should be. From the automated response:

It seems impossible that Cook could actually have gotten large numbers of authors to apply his rating scale to their papers. Maybe this is why he drastically reduced the number of included papers from the 12,000 mentioned in the survey to only those with abstracts shorter than 1000 characters (as discovered by Lucia at The Blackboard). Maybe the full reduction is to papers that not only have short abstracts but were also self-rated by authors. If so there is a clear selection bias and the abstracts in Cook's sample are not representative of the literature [commenters say that this limitation to self-rated abstracts has also been verified at The Blackboard].
Supposing that Cook really does have author-ratings for all the papers used in the survey, there is a major slip between the cup and the lip. The authors are described as rating the papers, while surveyors are asked to rate only the abstracts. This is critical because according to Cook’s rating rules the ratings are supposed to be based on what is or is not specifically mentioned. Obviously full papers discuss a lot more things than abstracts, especially unusually short abstracts. Thus if everyone is applying the rules correctly surveyors ratings should be systematically higher (assessing less conformity with consensus assumptions) than authors’ ratings.
This stood out to me because I had just spent several hours describing how I had to rate abstract after abstract "neutral," even though it clearly proceeded from "consensus" presumptions, just because its abstract had not directly mentioned those assumptions. The full papers might well have, making the author ratings and the surveyor ratings apples and oranges.
Suppose (as is likely) that survey participants who are referred by skeptic websites rate the abstracts accurately according to the instructions while those who are referred by credulous websites misapply the instructions so as to exaggerate the degree of consensus. This misapplication of the rules will bring the ratings of the consensoids closer to the ratings of the authors than the accurate ratings from the skeptics will be, making the consensoid surveyors look less biased than the skeptic surveyors when they are in fact more biased. accomplished.
My original post is after the jump. It's point is rather different: that the revelation from the survey is how neatly the various papers fall into simple categories of wasted effort on the "consensus" plantation. In contrast, Cook's attempt to gauge the degree of consensus turns out to be not very effective, which is another reason (besides its coming from John Cook) why people shouldn't feel much need take it.
Read more »