They say it all the time: even if there were some substantial mechanism of enhanced solar forcing it couldn't be responsible for late 20th century warming because solar activity was roughly constant from 1950 to 2000. I have rounded up statements to this effect from eighteen top "consensus" climatologists, like Raimund Muscheler (2012):


Solar activity & cosmic rays were relatively constant (high solar activity, strong shielding and low cosmic rays) in the second part of the 20th century and, therefore, it is unlikely that solar activity (whatever process) was involved in causing the warming since 1970.

Is he assuming that the oceans equilibrate rapidly to any change in forcing so that continued high forcing is necessary just to maintain the new equilibrium, resulting in only a brief shot of warming? He doesn't say. None of them say. They just make this highly counterintuitive claim that persistent forcing cannot cause continued warming, as if they actually believe that it is the change in the forcing rather than the level of the forcing that does the warming.

The tune changes however, as soon as the subject is forcing from greenhouse gases. A staple of the crusade against CO2 is the "commitment study," where climatologists use their general circulation computer models (GCMs) to estimate the amount of future warming that would result if atmospheric CO2 were to stop increasing and just stay at current levels. That means no change in forcing going forward, just continued forcing at the present "high" level. The estimates of the continued warming this would cause over the 21st century are quite large, roughly equivalent to 20th century warming, or in the latest estimations, substantially higher.


AR4 estimated the "constant composition" commitment at 0.1°C/decade for the early 21st century, 0.6 °C for the whole century


The multi-model average warming for all radiative forcing agents held constant at year 2000 (reported earlier for several of the models by Meehl et al., 2005c), is about 0.6°C for the period 2090 to 2099 relative to the 1980 to 1999 reference period. This is roughly the magnitude of warming simulated in the 20th century. Applying the same uncertainty assessment as for the SRES scenarios in Fig. 10.29 (–40 to +60%), the likely uncertainty range is 0.3°C to 0.9°C. Hansen et al. (2005a) calculate the current energy imbalance of the Earth to be 0.85 W m–2, implying that the unrealised global warming is about 0.6°C without any further increase in radiative forcing. The committed warming trend values show a rate of warming averaged over the first two decades of the 21st century of about 0.1°C per decade, due mainly to the slow response of the oceans. About twice as much warming (0.2°C per decade) would be expected if emissions are within the range of the SRES scenarios.

Should Gerald Meehl's estimate of 21st century commitment be reduced in compensation for the fact that he uses a 1980 - 1999 temperature average as a baseline? It seems that a decade's worth of his 21st century warming estimate is actually taking place between 1990 (the center of his baseline period) and 2000. If so, the compensation would be at most about 0.1°C.

That is the peak rate of warming the models produce for year-2000 Green House Gas levels. 1980-1999 GHG levels were lower, hence modeled warming would have been less than 0.1°C between the 1990 midpoint of the period and 2000 so less than 0.1°C of Meehl's estimate of 21st century warming would actually be taking place during the 20th century.

But maybe no adjustment is needed. Meehl et al. certainly do not hesitate in presenting their figures as estimates of "further warming" vis a vis 2000. From the Meehl 2005 abstract:


Two global coupled climate models show that even if the concentrations of greenhouse gases in the atmosphere had been stabilized in the year 2000, we are already committed to further global warming of about another half degree and an additional 320% sea level rise caused by thermal expansion by the end of the 21st century. ... At any given point in time, even if concentrations are stabilized, there is a commitment to future climate changes that will be greater than those we have already observed.

As for other commitment findings, Tom Wigley (2005) estimated that the "constant composition" warming commitment "could exceed 1°C," and the following graph is from Matthews and Weaver 2010, a pay-walled post-AR4 commitment study that was reviewed by Gavin Schmidt, who lists their commitment estimate from constant year-2000 GHG forcing as "an additional 0.3 to 0.8ºC warming over the 21st Century": 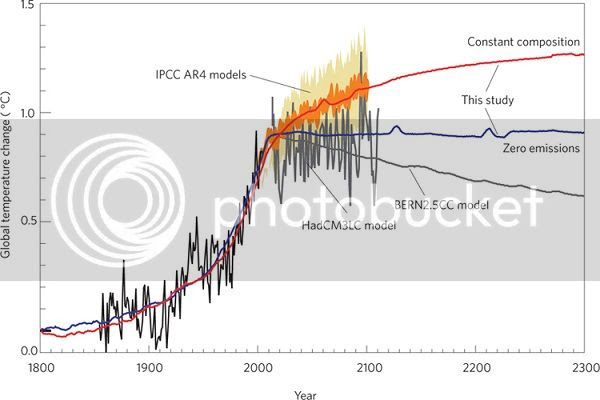 At the low end, that is more warming than was seen during the 20th century, at the high end it is 3 to 4 times 20th century warming. Guess that nixes the idea of rapid ocean equilibration.


Talking out of both sides of their mouths

These commitment findings should be taken with a grain of salt. Would current levels of GHG forcing, which have coexisted with no statistically significant warming for 15 years now, really cause the present century to warm twice as fast as last? Such wild prognostications show how extravagantly the "consensus" scientists are willing to exaggerate in favor of their anti-CO2 narrative, but they can't have it both ways. If they expect the persistence of a mildly elevated GHG forcing to cause many decades of substantial warming then it is pure dishonesty to turn around and declare that persistently elevated solar forcing, regardless of its level, could not cause more than a decade or two of warming.

Some of these scientists have done very important work. Ilya Usoskin, for instance, has been a pioneer in developing cosmogenic nucleotide proxies for solar activity. That makes it unsettling to have to call him out, but HEY USOSKIN, it's about time you renounced the BUT in Usoskin et al. 2005:


The long term trends in solar data and in northern hemisphere temperatures have a correlation coefficient of about 0.7 - .8 at a 94% - 98% confidence level.


During these last 30 years the total solar irradiance, solar UV irradiance and cosmic ray flux has not shown any significant secular trend, so that at least this most warming episode must have another source.

Does he actually believe that, or did it just seem like a small price to pay to stay in the good graces of the funding institutions that Al Gore, Maurice Strong, James Hansen, Stephen Schneider et al. established in the 1990s? In fact it is a huge price to pay. It is a complete debasement of scientific principle, handing the anti-CO2 crusaders an utterly fraudulent grounds for dismissing the alternative solar-warming hypothesis, and pretty much all of the leading solar scientists have embraced the same trope.

Whether this is bias or cowardice it needs to stop, and for anyone who wants to be silenced no longer, the commitment studies offer an ironclad opportunity. After all, the GCM guys have their own field of expertise. If the computer modelers insist that a steady high level of forcing will cause at least several decades of substantial continued warming then who are the solar scientists to contradict them? All they have to do is stop making highly speculative claims about ocean equilibration that lie completely outside of their field and are unsupported by any reason or evidence.

I asked Lucia if she knew of any GCM tests of the solar warming hypothesis. Had the "consensus" ever GCM-tested their oft-repeated claim that even if there were a substantial mechanism of enhanced solar forcing it could not have caused late 20th century warming? Not that she knew of, but she suggested that the results of a persistent elevated level of solar forcing should be roughly the same as for a persistent elevated level of GHG forcing, as examined in the commitment studies. In both cases the amount of warming would be the same. Both would be calibrated to account for observed 20th century warming, so the resulting ocean equilibration process should be similar.

Thanks Lucia. The "consensus" has indeed already in-effect GCM-tested the competing hypothesis, with just a slight change in time frame. Fifty years of high solar activity beginning in 1950 are analogous to fifty years of 2010-level CO2 forcing beginning in 2010, and the predicted warming from the CO2 commitment testing directly contradicts the stated rationale for dismissing a solar explanation for late 20th century warming.

Comments:
You want to know the truth about climate change.

ZetaTalk Prediction 7/15/1995: All attempts to explain the changes based on Global Warming from the greenhouse effect will run into snags as the weather will refuse to be predictable. A key change, to which one could point, is the warming of the Earth's oceans, around the globe. This has been measured as a 6 inch rise, worldwide, on all the beaches. The waters have risen because they are warmer, and warm water takes up more room than cold water, as all elementary physics books will report. How is it that the oceans, so very deep and so very cold, have warmed up? Is it the almost imperceptible rise in the temperature of the air, a degree or so, as reported to date? Since heat rises, why would this slight rise affect the oceans? Meteorologists will tell you that the effect of air warming is air turbulence, not warmer oceans.

ZetaTalk Prediction 6/15/1996: The weather is blamed on Global Warming, the greenhouse effect, which in and of itself might be an explanation that would hold if weather were the only symptom. It is the heat from the core of the earth and the increased earthquake and volcanic activity that boggles these attempts at alternative explanations.

ZetaTalk Prediction 7/15/1997: The increasing activity in the core of the Earth will eventually manifest itself in ways that will become difficult to explain. Erratic weather will continue to be explained away as Global Warming, the result of the atmosphere heating up to cause swirls in the upper atmosphere.

Scientists objecting to the conclusions forced by the UN body, the IPCC, were silenced, shushed, and ignored or punished. Yet the Global Warming explanation has been challenged by many scientists over the years, who found the facts not fitting with the Global Warming models.

Whoa. That was an excellent post. Please retain writing mainly because I appreciate your style…

Thanks for ones marvelous posting! I genuinely enjoyed reading it, you’re a great author.I will make certain to bookmark your blog and will often come back later on. I want to encourage continue your great writing, have a nice morning!