From Schmidt 2005 to Miller 2012: the “not needed” excuse for omitted variable fraud

This is an updated version of my WUWT post with the same title. That original post injected a gratuitous and incorrect use of the term "null hypothesis." I noted the error there in the comments and, as I have done before, am posting a corrected version here on my own blog. The change is slight. I just stop using the incorrectly applied term of art and stick to the common-language meanings of hypothesis and competing hypothesis that I intended all along.


Solar-magnetic activity gets the Voldemart treatment: the competing hypothesis that must not be named

Miller et al. 2012 recently provided some pretty strong evidence for a solar driver of climate. "This is the first time anyone has clearly identified the specific onset of the cold times marking the start of the Little Ice Age," said lead author Gifford Miller in January. And the dates?

Yet Miller never noted this coincidence. In fact, he tried to hide it, claiming that the onset of snow and ice growth coincided with periods of especially high volcanism (debunked both by Willis and by Wired), while dismissing the solar explanation with a misleading reference to the Maunder Minimum:


Our precisely dated records demonstrate that the expansion of ice caps after Medieval times was initiated by an abrupt and persistent snowline depression late in the 13th Century, and amplified in the mid 15th Century, coincident with episodes of repeated explosive volcanism centuries before the widely cited Maunder sunspot minimum (1645–1715 AD [Eddy, 1976]).

This is a remarkably blatant deception, acceded to by 13 co-authors plus the reviewers and editors at Geophysical Research Letters. It takes no expertise to know about the Wolf and Spörer minima. There is no physics involved, so who do these people think they are fooling?

Nobody. They just don't think it is their job to make the case for what they regard as "the other side." The anti-CO2 alarmists are behaving like lawyers in an adversarial legal proceeding, hiding what hurts their own case while overstating what can be fashioned in support. In the courts an adversarial system is able to elicit a measure of truth only because there is a judge to maintain rules of evidence and procedure, and a hopefully unbiased jury examining the facts. These conditions do not obtain in science. The anti-CO2 alarmists are both the peer-review jury and the judge/editors, devolving into a pre-scientific ethic where acceptance is determined by power, not reason and evidence.

The lawyerly behavior of Miller et al. lead them to embrace a particular excuse for ignoring the evidence for a powerful solar driver of climate (even evidence that they themselves uncover). They don't "need" it. But they were not the pioneers of this anti-scientific ploy. That dishonor goes to Gavin Schmidt.
Read more » 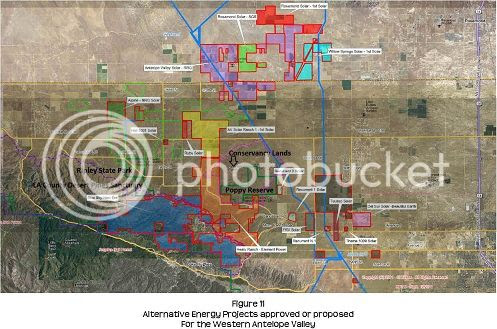 In 2006 California's Senate Bill 107 codified a requirement that by 2010 all electricity retailers in the state were to procure 20% of their electricity from "renewables." That same year L.A. County Supervisor Michael Antonovich established Nuisance Abatement Teams that started combing the Mojave desert hitting isolated residents with ever-expanding lists of code violations, imposing whatever it took to drive residents out, and they made their intentions perfectly clear:

As her ordeal wore on, she heard one agent, looking inside their comfortable cabin, say to another: "This one's a real shame — this is a real nice one."

A "shame" because the authorities eventually would enact some of the most powerful rules imaginable against rural residents: the order to bring the home up to current codes or dismantle the 26-year-old cabin, leaving only bare ground.

"They wouldn't let me grandfather in the water tank," Jacques Dupuis says. "It is so heart-wrenching because there was a way to salvage this, but they wouldn't work with me. It was, 'Tear it down. Period.' "


The immediate object in this case was actual confiscation of the land:

In order to clear the title on their land, the Dupuises are spending what would have been peaceful retirement days dismantling every board and nail of their home — by hand — because they can't afford to hire a crew.

As the de facto evictions and confiscations multiplied, Antonovich's motives were questioned. Was he trying to clear the land for redevelopment? In August of 2011, Antonivich Press Secretary Tony Bell denied it (at 8:40):

The county is simply responding to code violation complaints from neighbors in the area and any speculation about redevelopment was purely a conspiracy theory.

I did some Google searching at the time to see if any major wind or solar developments were planned for the area where the evictions were centered (the western Mojave's Antelope Valley), but couldn't pin down the connection. When First Solar recently cleared a permit for a massive Antelope Valley project I tried again and found some things I should have seen before.

It seems the wraps were already off when Antonovich issued his denials. Newspapers had reported just a month before that Antelope Valley had "33 utility-scale renewable energy installations" in the works. The updated map above shows how much of the valley has been sectioned off for various wind and solar projects.

These are presumably the anonymous "neighbors" who were asking for previous residents to be evicted. Apparently it is not enough that our green crony capitalists are getting billions in taxpayer subsidies, or that that rate-payers are forced to buy their "renewable" energy at extra-high prices. They also need their pet politicians to steal the land for them.

First Solar is the largest recipient of Obama loan guarantees at $3.73b

California is the perfect patsy. First Solar makes its own cadmium-telluride solar panels. Another cadmium-telluride panel manufacturer, Abound Solar (recipient of $400 million in loan guarantees) just shut down production, but First Solar doesn't have to worry how much it costs to produce intermittent solar in the Mojave because California residents are required by law to pay whatever it takes. That's the key to successful green crony capitalism: vertical green-subsidy integration. Solyndra and Abound really should have known. They weren't corrupt enough.

Grumman Aircraft objected that First Solar's 2100 acre AV Solar Ranch One would interfere with its stealth radar testing, but this concern was brushed aside:

A solar energy generating plant is "the highest and best use for this particular property," said Mel Layne, president of the Greater Antelope Valley Economic Alliance.

More important than national security and certainly more important than the property rights of a bunch of isolated "desert rats." If only we didn't have the lowest and the worst telling us what the "highest and the best" is, but this is why we have rights. The voluntary nature of the market insures that the benefits from each transaction are sufficient to make all parties better off. As soon as government starts subsidizing loans, forcing customers to buy inefficiently produced power, and otherwise confiscating property, there are no limits to the losses.


Wind was also big on the Antelope Valley menu, but the opposition firmed up

Perhaps that should be re-phrased. Antelope Valley was also big on the wind farmers' menu:

"The western Antelope Valley boasts both the highest and most consistent winds in almost all of Southern California," said Nat Parker, project manager for Element Power's proposed Wildflower Green Energy Farm. "Between 4 p.m. and 7 p.m. the winds reach their highest peak, and it falls in line with when the electrical grid has highest demand."

County Supervisor Michael D. Antonovich, who represents the unincorporated Antelope Valley, said this region "has the potential to become the nation's leader in green, alternative energy innovation and production." But he emphasized that community support is key to the success of these projects.

Element wants to use 4,000 acres of private land next to the poppy reserve for solar panels and some 50 wind turbines almost 500 feet high. Each turbine would produce enough electricity to power up to 2,000 homes, Parker said.

As for the wisdom of putting 500 foot tall wind turbines in the Antelope Valley, Antonovich's own website has an item on the hurricane force winds that struck the area early last December. That nice peak-demand wind isn't going to help much when half the turbines are on the ground.

Thankfully, the opposition has organized sufficiently to block the big windmills. Even Antonovich is cowed enough to put a wet finger in the air and pretend that he is all about protecting birds now, but of course he's not done yet. Next in Antonovich's sights: high speed rail to Las Vegas. Weather warning for the eastern Mojave: 80% chance of confiscatory Nuisance Abatement Teams. S#!+$torm guaranteed.