As Congress considers vastly expanding the power of copyright holders to shut down fair use of their intellectual property, this is a good time to remember the other activities that Obama's "regulatory czar" Cass Sunstein wants to shut down using the tools of copyright protection. For a couple of years now, Sunstein has been advocating that the "notice and take down" model from copyright law should be used against rumors and conspiracy theories, "to achieve the optimal chilling effect."

What kinds of conspiracy theories does Sunstein want to suppress by law? Here's one:

... that the theory of global warming is a deliberate fraud. [From page 4 of Sunstein's 2008 "Conspiracy Theories" paper.]

At present, limits on speech are governed by libel law. For statements about public figures, libel requires not just that an accusation must be false, but that it must have been:

The purpose of the "actual malice" standard is to leave wide latitude for errant statements, which free public debate obviously requires. Sunstein thinks that room-for error stuff is given too much weight. He'd like it to see errant statements expunged. From Sunstein's 2009 book On Rumors (page 78):

On the Internet in particular, people might have a right to ‘notice and take down.' [T]hose who run websites would be obliged to take down falsehoods upon notice.

Further, "propagators" would face a "liability to establish what is actually true" (ibid).

Suppose you are a simple public-spirited blogger, trying to expose how Michael Mann, Phil Jones, Tom Wigley, and other Team members conspire to suppress the research and destroy the careers of those who challenge their consensus views. If Sunstein gets his way, Team members will only have to issue you a takedown notice, and if you want your post to stay up, you'll have to go to court and win a judgment that your version of events is correct.

Today that should be doable, at great expense. But before the first and second batches of climategate emails were released there were only tales of retaliation, with one person's word against another's. Thus at the most critical juncture, when documentary proofs of The Team's vendettas were not yet public, even a person who was willing to run Sunstein's legal gauntlet might well have been held by a judge to be in error.

The path from Sunstein's 2008 "Conspiracy Theories" article to his 2009 On Rumors book is straightforward. According to Sunstein's 2008 definition, a conspiracy theory is very close to a potentially libelous rumor:

... a conspiracy theory can generally be counted as such if it is an effort to explain some event or practice by reference to the machinations of powerful people, who have also managed to conceal their role. [Abstract]

At this time, Sunstein's "main policy idea" was that:

government should engage in cognitive infiltration of the groups that produce conspiracy theories....

... government agents or their allies (acting either virtually or in real space, and either openly or anonymously) will undermine the crippled epistemology of those who subscribe to such theories. ["Conspiracy Theories," pages 14-15]

Government funding of trolls? Sounds like a bad joke, but Sunstein quickly upped the ante. In On Rumors he followed the conspiracy theory as slanderous rumor angle as a way to justify adopting the "notice and take down" artillery from copyright law. So Sunstein already has a history of escalation in his legal crusade against ideas he does not like. If SOPA and PIPA are enacted and the machinery of copyright protection becomes vastly more censorious, its pretty much a certainty that Sunstein will want to use these more powerful tools against rumors and conspiracy theories as well.


Sunstein's target has always been the very core of the First Amendment: the most protected political speech

In On Rumors, the rumor that Sunstein seems most intent on suppressing is the accusation, leveled during the 2008 election campaign, that Barack Obama "pals around with terrorists." ("Look Inside" page 3.) Sunstein fails to note that the "palling around with terrorists" language was introduced by the opposing vice presidential candidate, Governor Sarah Palin (who was implicating Obama's relationship with domestic terrorist Bill Ayers). Instead Sunstein focuses his ire on "right wing websites" that make "hateful remarks about the alleged relationship between Barack Obama and the former radical Bill Ayers," singling out Sean Hannity for making hay out of Obama's "alleged associations" (pages 13-14).

What could possibly be more important than whether a candidate for president does indeed "pal around with terrorists"? Of all the subjects to declare off limits, this one is right up there with whether the anti-CO2 alarmists who are trying to unplug the modern world are telling the truth. And Sunstein's own bias on the matter could hardly be more blatant. Bill Ayers is a "former" radical? Bill "I don’t regret setting bombs" Ayers? Bill "we didn't do enough" Ayers?

For the facts of the Obama-Ayers relationship, Sunstein apparently accepts Obama's campaign dismissal of Ayers as just "a guy who lives in my neighborhood." In fact their relationship was long and deep. Obama's political career was launched via a fundraiser in Bill Ayers' living room; Obama was appointed the first chairman of the Ayers-founded Annenberg Challenge, almost certainly at Ayers' request; Ayers and Obama served together on the board of the Woods Foundation, distributing money to radical left-wing causes; and it has now been reported by full-access White House biographer Christopher Andersen (and confirmed by Bill Ayers) that Ayers actually ghost wrote Obama's first book Dreams from My Father.

Whenever free speech is attacked, the real purpose is to cover up the truth. Not that Sunstein himself knows the truth about anything. He just knows what he wants to suppress, which is exactly why government must never have this power. 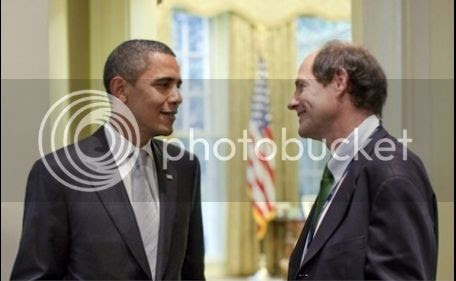 
You, on the other hand, are the enemy

In climate science, there is no avoiding "reference to the machinations of powerful people, who have also managed to conceal their role." The Team has always been sloppy about concealing its machinations, but that doesn't stop Sunstein from using climate skepticism as an exemplar of pernicious conspiracy theorizing, and his goal is perfectly obvious: he wants the state to take aggressive action that will make it easier for our powerful government funded scientists to conceal their machinations.

Cass Sunstein may be the most illiberal man ever to present himself as a liberal. He also holds the most powerful regulatory position in existence, overseeing every federal regulation. For a sample of his handiwork, realize that he oversaw the EPA's recently issued transport and MACT rules, which will shut down 8% of current U.S. electricity generation.

Maybe you don't think it's a good idea to unplug critical energy infrastructure just to achieve marginal further reductions in micro-particulates that have already fallen to well below half of their 1980 levels:

Sorry but there is no place in Sunstein's EPA for such doubts and, as far as he is concerned, no place for them in the realm of public debate either. The environmental bureaucracy has everyone's best interest at heart. To question that is the very definition of conspiracy mongering.

Next people will be claiming that Obama actually intends for energy prices to "necessarily skyrocket." Such vile rumors need to be silenced, and this can easily be done. Once the SOPA/PIPA machinery is in place, it will only take one line in some future omnibus bill to extend it from copyright to criticism.

How to overthrow the clear language of the Constitution in two easy steps. Sunstein, a professor of constitutional law at Harvard, claims to know what end the authors of our Constitution were pursuing when they established freedom of speech as their means. From there he simply claims to have a better means to that end, as if his opinion of what is the better means could in any way alter the means that is framed in the Constitution:

Sunstein quoted Felix Frankfurter as saying, “Freedom of the press is not an end in itself, but a means to the end of achieving a free society.” After offering some examples in which uninhibited press freedom leads to the destruction of other freedoms, he proposed a reconsideration of the idea of the ‘chilling effect’”:

Sunstein wants to chill those views (theories even) that the courts judge to be wrong. Instead of letting the contest of information and argument reveal where truth lies, Sunstein wants to let these government overseers decide. But the Constitution establishes the exact opposite answer to the problems that speech can create. The founders didn't want government deciding what is true and what is false. They knew that free exchange advantages truth, while censorship is the handmaiden of falsehood, so they laid down that "Congress shall make no law... abridging the freedom of speech."

Sunstein thinks by divining the objective of this constitutional requirement, and claiming to have a better way to achieve it, he is thereby justified in replacing that constitutional requirement with its opposite: Congress shall make laws abridging the freedom of speech. His On Rumors book is short on details of how his system would work, but it is clear from the quoted remarks that he does not consider Supreme Court precedent to be any kind of fixed barrier. He thinks the Constitution should be interpreted differently, in a way that gives people like him a free hand to establish what they think are better means than those actually written in the Constitution.

Comments:
If you want to make you free flash website I think you need free flash templates .
Free flash intos is of the best free flash effects that you need.

Freedom of speech is the beauty of human rights!