It was 19 Islamic terrorists. That makes the broken-circle memorial to Flight 93 a memorial to the terrorists, who are depicted not only as smashing our circle of peace, but as leaving a giant Islamic crescent-and-star flag in its place:

They call it a broken circle now, but the unbroken part of the circle, what symbolically remains standing in the wake of 9/11, is just the original Crescent of Embrace: a giant Islamic-shaped crescent, pointing to Mecca.

The damned thing is actually an al Qaeda victory mosque, with the Mecca-oriented crescent as its mihrab: the Mecca-direction indicator around which every mosque is built.

That is the short version of an advertisement that started running in western Pennsylvania newspapers last week. Alec Rawls sends along this update on the effort to stop the crescent mosque.

The Pittsburgh Tribune-Review recently solicited Tom Burnett Senior's response to some new design images for the Flight 93 memorial. When he said that the so-called redesign leaves all of the terrorist memorializing features intact, editors instructed reporter Kari Andren to leave his remarks out. They preferred un-interrupted praise from the same few family members who always speak up for the broken-circle design.

The people of Pennsylvania deserve to see what their information gate-keepers don't want them to know, so Mr. Burnett and his backers decided to begin their 10th anniversary ad campaign a few weeks early. The first full-page color ad just ran in the Somerset Daily American and will appear in two other local papers next week.

For a PDF of the ad copy, click on the thumbnail below, or scroll down for the same content formatted for browsing. If anyone wants to help fund additional advertising, a very generous soul has offered to match all donations up to a total of $5000. 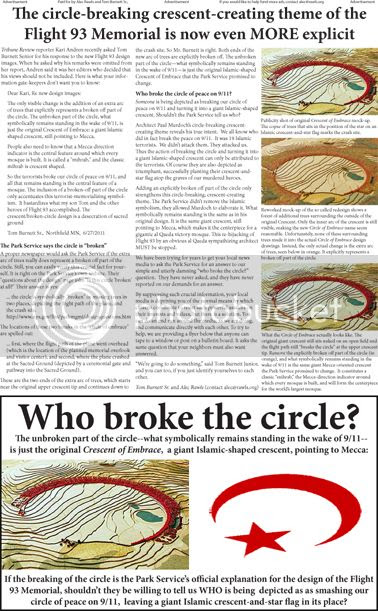 As the ad-headline notes, the Circle of Embrace "redesign" only accentuates the circle-breaking crescent-creating theme of the original Crescent of Embrace. Mr. Burnett's full remarks explain:

The only visible change is the addition of an extra arc of trees that explicitly represents a broken off part of the circle. The unbroken part of the circle, what symbolically remains standing in the wake of 9/11, is just the original Crescent of Embrace: a giant Islamic shaped crescent, still pointing to Mecca.

People also need to know that a Mecca-direction indicator is the central feature around which every mosque is built. It is called a "mihrab," and the classic mihrab is crescent shaped.

So the terrorists broke our circle of peace on 9/11, and all that remains standing is the central feature of a mosque. The inclusion of a broken-off part of the circle only accentuates this terrorist-memorializing symbolism. It bastardizes what my son Tom and the other heroes of Flight 93 accomplished. The crescent/broken-circle design is a desecration of sacred ground.

A proper newspaper would ask the Park Service if the extra arc of trees really does represent a broken-off part of the circle. Still, people can easily verify this crucial fact for themselves. It is right on the Park Service's own website. Their "questions about the design" page asks "Is this circle 'broken' at all?" Their answer is yes:

... the circle is symbolically "broken" or missing trees in two places, depicting the flight path of the plane, and the crash site.

The locations of these two breaks in the "circle of embrace" are spelled out:

These are the two ends of the extra arc of trees, which starts near the original upper crescent tip and continues down to the crash site. So Mr. Burnett is right. Both ends of the new arc of trees are explicitly broken off. The unbroken part of the circle—what symbolically remains standing in the wake of 9/11—is just the original Islamic-shaped Crescent of Embrace that the Park Service promised to change.

To illustrate, the ad includes a side-bar of graphics, showing just what is changed and what is not changed in the memorial. This is slightly complicated by the fact that the Park Service pretended that they were going to make one very big cosmetic change that they are not actually making, but a few pictures easily tell the tale.

A publicity shot of the original Crescent of Embrace design shows what appears to be a bare-naked Islamic crescent-and-star flag planted atop the crash site: 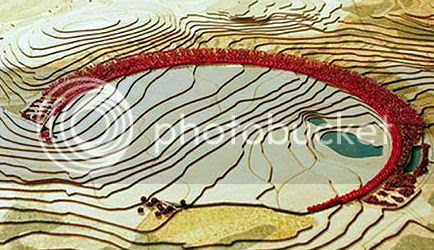 When this blatant Islamic symbolism caused an uproar, architect Paul Murdoch re-worked his mock-up to show a forest of additional trees surrounding the outside of the original Crescent: 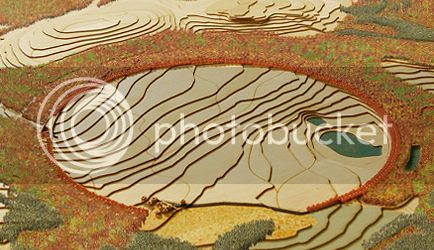 Only the inner arc of the crescent remains visible, making the new Circle of Embrace name seem reasonable. But none of these surrounding trees made it into the actual Circle of Embrace design drawings. (The "Stage 1" drawings, encompassing the area seen in these images, were released in 2009.)

The Park Service may eventually let the bare field grow in with trees, but this is not a change in the design. The only actual change is the extra arc of trees, seen below in orange. It explicitly represents a broken off part of the circle: 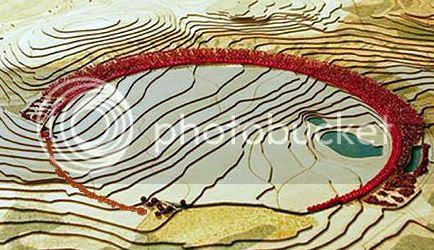 What the Circle of Embrace actually looks like. The original giant crescent still sits naked on an open field and the flight path still "breaks the circle" at the upper crescent tip.

Remove the explicitly broken off part of the circle (in orange), and what symbolically remains standing in the wake of 9/11 is the same giant Mecca-oriented crescent the Park Service promised to change. It constitutes a classic "mihrab," the Mecca-direction indicator around which every mosque is built, and will form the centerpiece for the world’s largest mosque.

When the "Crescent of Embrace" was unveiled as the winning design, architect Paul Murdoch explained the crescent name and the crescent shape by saying that the circle was broken on 9/11, leaving only a part of the circle still standing: the giant crescent. The fact that this circle-breaking crescent-creating theme remains completely intact in the broken-circle design demands the question of WHO is being depicted as breaking the circle of peace on 9/11.

The final section of the ad points out that there can only be one answer. We all know who broke the peace on 9/11. Thus the memorial can only be depicting the actions of the terrorists, who are seen not only as smashing our circle of peace, but as replacing it with their own crescent and star flag.

With the media censoring all criticism, people who don't like all this blatant Islamic symbolism need a way to signal each other directly, so the ad finishes with a handy dandy flyer that readers can post on windows, walls, bulletin boards etcetera: 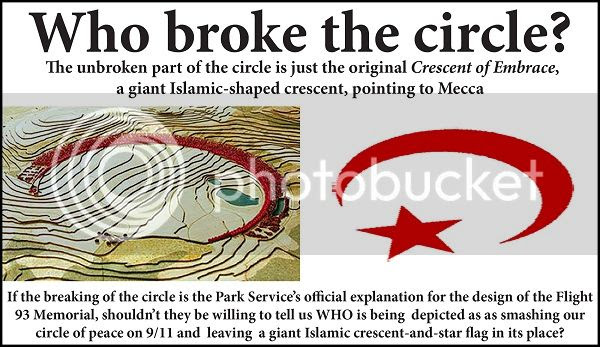 If you want to put a few up yourself, click the image above for a printable PDF, complete with urls for our petition to stop the memorial and for more information. And here is an ad-copy version that anyone can run in their own local paper (the free weeklies can be pretty reasonable).

As Flight 93 showed, just because the hijacker has control of the cockpit doesn't mean he can't still be stopped.

Comments:
I want to know who proposed this supposed 'Memorial'? Who commissioned the artisit to design this obamination? Who is this funded by? Let me guess? Our Gov't. The families of the Victims should have been put in charge of the Memorial& the American people would have funded it. Why cant they just put up a Giant American flag and the typical Headstones with ALL the names of the Hero's that died and a Eternal Flame? WHY A CIRCLE OF EMBRACE? We have been breached from within. They Hijacked the plane and now they are Hijacking the Memorial. We are at war on our own HomeFront. I will pass this on to all I know. Americans need to fight this like our Childrens lives depend on it bacause it does!

I would like to know the answer to "sha44ss"'s question as well. Why a "circle of embrace"? This sounds so "PC" to me. Besides the architect, who was on the design committee? Did this committee include Muslims? Was the architect influenced about his design by Muslims?

I'd like to see a list of names of anyone who came up with the design for the memorial.

Here's contact information for the architect of the "Crescent of Embrace"

here are two articles to read for more info on the memorial:

Murdoch has the unmitigated gall to call the well documented and logical criticism of this design... "peripheral nonsense"??? This man obviously has NO RESPECT for the families, friends and loved ones who lost so much. It is a travesty that this immoral representation has been put in place. I would like to express my love and condolences to these families and an apology for what the state of Pennslyvania and Mr. Murdoch has done.

This yahoo interview with Murdoch will give you "the official explaination" for the design... but as you know, the Quran gives Muslims and their co-horts free reign to lie to infidels, so no truth will come from Mr. Murdoch. He is justified by Allah to lie, cheat or whatever to create a memorial to the highjackers... or martyrs according to extremists.