That’s from the avalanche center in the Tetons, and here is a current web-cam view up Yosemite Valley towards still-closed Tioga Pass (in the left background): 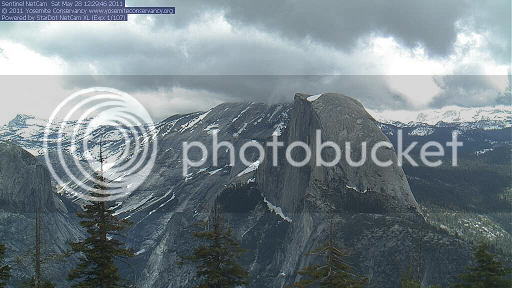 AP has a nice roundup of late snow and snowpack news (including the Teton quote). Just weather. No mention of climate. Nothing this time about snow and cold being caused by global warming. Now if we could just get the press to do the same when there is a regional hot spell. Still, it’s progress. Remember the spinning on last winter’s snowzilla?

Most amusing was Al Gore’s quote from “the scientific community“:

A rise in global temperature can create all sorts of havoc, ranging from hotter dry spells to colder winters, along with increasingly violent storms, flooding, forest fires and loss of endangered species.

A click on Gore’s link showed “the scientific community” to be Chicago Tribune columnist Clarence Page. Gore should also have quoted Page’s credentials, which Page listed in his next line:

That’s simple science even for me, a guy whose scientific education pretty much ended with the old “Watch Mr. Wizard” TV show and a subscription to Popular Mechanics.

Unfortunately, Gore could have quoted some actual scientists to the same effect, as Andrew Bolt quoted the Potsdam Institute for Climate Impact Research:

The overall warming of the earth’s northern half could result in cold winters… Recent severe winters like last year’s or the one of 2005-06 do not conflict with the global warming picture, but rather supplement it.

But as Bolt also quoted, the Potsdammer’s IPCC bible had predicted the opposite:

What, are there no takers this time around? Are they tiring of the ridicule?

“People underestimate the power of models. Observational evidence is not very useful.” 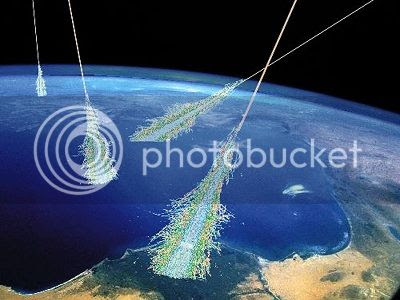 Andrew Orlowski at the UK Register has an anecdotal account of Downing College’s skeptics-vs-believers mash-up. Ace of Spades pulled the juiciest bit:

In short, the day lined up Phil Jones, oceanographer Andrew Watson, and physicist Mike Lockwood, the latter to argue that the sun couldn’t possibly have caused recent warming. He was followed by the most impressive presentation from Henrik Svensmark, whose presentation stood out head and shoulders above anyone else. Why? For two reasons. The correlations he shows are remarkable, and don’t need curve fitting, or funky statistical tricks. And he has advanced a mechanism, using empirical science [image above], to explain them.

At the other end of the scale, by way of contrast, the Met’s principle research scientist John Mitchell told us: “People underestimate the power of models. Observational evidence is not very useful,” adding, “Our approach is not entirely empirical.”

Yes, you could say that.

Ken Haapala on the history of models vs. empirical evidence

He notes that the opponents of Galileo held the attractiveness of a model to be a kind of evidence that could outweigh against the empirical evidence that Galileo amassed. Worth reading.

The strongest argument, according to Lockwood, for the sun not being a driver in recent climatic activity is that “it has been going in the wrong direction for 30 years.”

Hmmm. So as soon as solar magnetic activity passed its peak, when it was still at some of the highest levels ever recorded, these very high levels of solar activity could no longer have caused warming?

As I have noted a number of times, this argument depends on an unstated assumption that, by 30 years ago (by 1980 or so), ocean temperatures had equilibrated to whatever forcing effect the 20th century’s high level of solar activity might be having. Otherwise the continued high level of forcing would continue to create warming until equilibrium was reached, regardless of whether solar activity had peaked yet. (The actual peak seems to have been solar cycle 22, from 1986-96, not 1980, as Lockwood claims.)

When I pressed Lockwood on his implicit equilibrium assumption he justified it by citing evidence that the planet's surface temperature response to solar activity peters out (as measured by decorrelation) within a few years:

Almost all estimates have been in the 1-10 year range.

But decorrelation between surface temperatures and solar activity is very different from equilibrium. All decorrelation is measuring is the rapid temperature response of the upper ocean layer when solar activity rises or falls. That rapid response indicates that the sun is indeed a powerful driver of global temperature, but it says next to nothing about how long it takes for heat to carry into and out of deeper ocean layers.

Remember these graduate student “climate scientists,” going all Clockwork Orange for the planet or something:

Sounds like they made an appearance at Downing College too:

The audience had been good enough to heed Howard’s opening advice that “if anybody mentions Climategate, they’ll be evicted”. Nobody ambushed the CRU crew all day – it was all very polite. I noted that the skeptics made a point of listening politely to the warmists, and applauding them all. A group of students and a few others, simply giggled and mocked the skeptics, however from start to finish. One of their tutors (I presume) was in hysterics all day.

Give ‘em an A. They learned their “observational evidence is not very useful” lesson well.

(Posted a couple weeks ago at WUWT. I'm being kind of lackadaisical about updating things here.)