Has to be, because the rationale that ATF higher-ups gave to the operators makes no sense at all:

Agent Dodson and other sources say the gun walking strategy was approved all the way up to the Justice Department. The idea was to see where the guns ended up, build a big case and take down a cartel. And it was all kept secret from Mexico.

How could it possibly matter where criminal Mexican drug gangs get their illegal weapons? ALL their guns are illegal under Mexican law. If the illegality of their weapons could bring them down, there would be no need for their guns to come from America.

Unlike our sweepingly stated Second Amendment, the Mexican constitution only enumerates a highly qualified right to possess arms, and as in my state of California, enumerated gun rights in Mexico are not enforced. Thus Mexico's armed-to-the-teeth criminal gangs could in theory be taken down by gun prosecutions (if Mexico had the wherewithal to do it) by enforcing MEXICAN law. Evidence of violations of AMERICAN law is completely irrelevant, never mind its being tainted by U.S. government complicity.

The only actual reason the ATF would have to let American-sourced guns "walk" into Mexico is to provide facts in support of the Obama administration's ongoing effort to blame Mexican gun violence on American arms dealers, as justification for further infringing the constitutionally protected gun rights of American citizens. They have been putting out trumped up charges of U.S. blame for Mexican drug violence since they got into office, but their weak evidence hasn't stood up to scrutiny. So they decided to manufacture some hard evidence. It is the only logical explanation.

Where do Mexican drug-war weapons actually come from? This from James G. Conway Jr., "a former FBI special agent and program manager of FBI counterterrorism operations in Latin America":

On the surface, a cursory review of the high-powered military-grade seized weaponry -- grenades, RPGs, .50-caliber machine guns -- clearly indicates this weaponry is not purchased at gun shows in the United States and can't even be found commercially available to consumers in the United States. The vast majority of the weaponry used in this "drug war" comes into Mexico through the black market and the wide-open, porous southern border of Mexico and Guatemala. This black market emanates from a variety of global gunrunners with ties to Russian organized crime and terror groups with a firm foothold in Latin America such as the FARC, as well as to factions leftover from the civil wars in Central America during the 1980's. Chinese arms traffickers have managed to disperse weapons, particularly grenades, on the streets of Mexico. In addition, many of the Mexican military-issued, Belgian-made automatic M-16s currently in the hands of traffickers have been pilfered from military depots and the thousands who have deserted the Mexican army in recent years.

The exception would be those few thousands of semi-automatic M-16's and AK-47's let into Mexico by the ATF, along with however many Barret-50's. Yeah, those are serious weapons. Obama's minions definitely added to the murder spree, all in pursuit of their unconstitutional war against gun rights here at home.


Mexico getting guns from America?

For those leftists who have trouble with this language, no, Mexico is NOT part of America. It is part of North America (the continent) and is part of The Americas (the two continents). Would you tell someone that you are from the continent of America? Are you dumber than a third grader?

Under "countries" for $200 Alex, the case is just as unambiguous. The only country with America in its name is The United States of America. We, and only we, are "America." 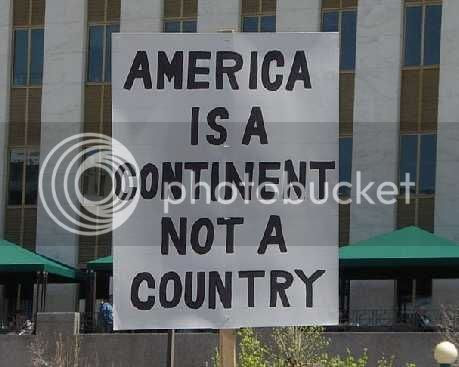 
UPDATE: Evidence that the ATF did indeed have anti-American skullduggery in mind

The Christian Science Monitor reports that one of ATF's objectives was indeed to prosecute the involved gun dealers:

Under the ATF’s Operation Fast and Furious, gun smugglers were allowed to buy the weapons in the hopes the US agents could track the firearms to the Mexican drug runners and other border-area criminal gangs as well as build cases against the gun dealers themselves.

But it is known that the dealers were operating under instruction from the ATF:

Dodson said some of the cooperating gun dealers who sold weapons to the suspects at ATF’s behest initially had concerns and wanted to end their sales. One even asked whether the dealers might have a legal liability, but was assured by federal prosecutors they would be protected, he said.

The case logs show ATF supervisors and U.S. attorney’s office lawyers met with some of the gun dealers to discuss their “role” in the case, in one instance as far back as December 2009.

Was ATF planning on double-crossing the dealers? That fits with ATF's willingness to deny involvement, even to the point of lying to Senator Grassley about it. This would be natural if they were planning from the beginning on lying in court. And notice how easily the videotaped sales (at the 1 minute mark here) could be used as evidence of lawbreaking by the dealers, if the ATF just denied that the dealers were operating under their instructions.

They DID deny this to Grassley, automatically hanging the dealers out to dry. Thus at least from the moment on of the ATF guns was used by Mexican bandits to murder US border patrol agent Brian Terry, prosecution of the dealers became the ATF's de facto strategy. Add the report from the Christian Science Monitor that the ATF was after the gun dealers all along, and the fact that they actually did try to pin the murder gun on the dealers becomes powerful confirmation.

How could ATF and DOJ think they could get away with lying about their involvement in the sale of the rifle that was used to murder Brian Terry? They know that the press wants to omit the same facts that they do. This from AP's Will Weissert:

BROWNSVILLE, Texas -- Federal agents are barely able to slow the river of American guns flowing into Mexico. In two years, a new effort to increase inspections of travelers crossing the border has netted just 386 guns - an almost infinitesimal amount given that an estimated 2,000 slip across each day.

The problem came into sharp focus again last month when a U.S. Immigration and Customs Enforcement agent was killed on a northern Mexican highway with a gun that was purchased in a town outside Fort Worth, Texas.

Never does the article note that the murder gun was sold to Mexican criminals on the instructions of the ATF. Instead, the article uses this consequence of ATF perfidy as an excuse to retail fabricated propaganda from Bill Clinton's anti-gun zealots. He does note that their report "did not include information on how [the 2,000 illegal guns a day] figure was reached," but that does not stop him from touting it as "the last comprehensive estimate on the subject." How does he know the study was comprehensive if they never revealed where their estimates came from? Is the study comprehensive if they pulled the numbers out of thin air?

Weissert goes on to mention the ATF gun running scandal, but instead letting his readers know that the current news story, the murder of agent Terry, is part of it, he just offers the ATF's nonsensical justification as his own analysis:

The ATF's work on the border highlights the tension between short-term operations aimed at arresting low-level straw buyers - legal U.S. residents with clean records who buy weapons - and long-term ones designed to identify who is directing the gun buys.

Since he is presenting this as his own understanding, he ought to note that if the Mexican government wants to identify who is directing illegal gun buys, they have plenty of cases to look at already. Under the guise of showing the magnitude of the problem that ATF is trying to solve, Weissert even provides some relevant figures:

From September 2009 to July 31 of last year alone, the Mexican government seized more than 32,000 illegal weapons, even though purchasing guns in Mexico requires permission from the country's defense department, and even then buyers are limited to pistols of .38-caliber or less.

Mexican authorities already know where the illegal guns are going because they are finding large numbers of them on a daily basis. As for their ability to prosecute gang leaders for illegal weapons that are confiscated from low level gang members, that problem is the same whether the guns come from the ATF or from Croatia.

The ATF is providing a blatantly fraudulent excuse for its gun running, and Weissert takes it as his job to make this excuse look as good at possible. That this is not just stupidity on Weissert's part, but is willful deception, is proved by his pretense that Terry was murdered with an illegally sold weapon. He is self-consciously hiding the truth from his readers. Evil trash.

Many guns used to kill in Mexico never have their origins traced. Still, ATF has long estimated that of the weapons discovered at Mexican crime scenes which authorities do choose to trace, nearly 90 percent are eventually found to have been purchased in the U.S.

Duh. Guns legal for sale in the United States are identifiable by their import stamps, serial number ranges, and other markings. Those are the guns that are examined for U.S. gun trace data. Even then, the 90% figure only refers to those guns that are successfully traced. Of course the guns that the U.S. actually has trace data for are almost entirely U.S. guns. The actual percentage of Mexican crime guns that have been traced to America is 12.

These issues have been much discussed, and Weissert's article shows enough research that he would certainly be aware of them, yet he leaves the crucial context out, and again, the fact that he lies by omission about the Terry murder gun indicates that these other omissions are also intentional.

Just before agent Terry was murdered, ATF had used trace data on Gunrunner gun sales to slander two of its Gunrunner gun shops. That data had been leaked to WAPO by ATF, which leaked similar data to Mexican newspapers.

Comments:
in fact America is a continent, to counter that sign that sound so separatist, the only problem is that a lot of person consider it just country, if you watch the map America start in Alaska and end in Patagonia, Argentina.

I can't believe I'm answering a Viagra comment spammer, but no, there is no continent that spans from Alaska to Patagonia.