Alan Keyes against the Flight 93 memorial 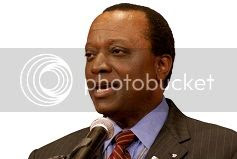 Conservative hero Alan Keyes is asking whether there is a pattern of submission surrounding the nation's 9/11 sites. Apparently he has seen our video expose of Islamic and terrorist memorializing features in the crescent memorial to Flight 93 (now called a broken circle). Like any straight-thinker, he doesn't like what he sees. The Flight 93 crash site is no place for a giant Islamic-shaped crescent, no matter what it is called.

Back in 2005, then-Rep. Tom Tancredo was reported to have sent a letter to the National Park Service "asking the Interior Department to reconsider the crescent-shaped design of the memorial to those aboard a plane hijacked on Sept. 11, 2001, because some may think it honors the terrorists." Tancredo quite sensibly argues that "regardless of whether 'the invocation of a Muslim Symbol' was intentional, 'it seems that such a symbol is unsuitable for paying appropriate tribute to the heroes of Flight 93 or the ensuing American struggle against radical Islam.'"

Keyes notes our claim that the design is still replete with terrorist memorializing features and he seems to find it credible. Why shouldn't he? The damning features are all right there in architect Paul Murdoch's design drawings. Thank you Doctor Keyes!


"It’s not just embarrassing. It is a dangerous willful blindness, spurning the woken vigilance of Flight 93."

That's the last line of the full-page advertisement that Tom Burnett Senior and Alec Rawls will be running in the Somerset Daily American this Friday and Saturday (when the two first ladies will be in town for the 9/11 anniversary):

We are hoping that visitors will hold onto our ad, maybe even tape it to their car windows, and most especially, show it to any press people they come across. Hey, if the Park Service can use 9/11 to plant the world's largest mosque on the Flight 93 crash site, we can use 9/11 to object.

Anyone live within driving distance of Somerset Pennsylvania? It's a beautiful place to visit and a group of motorcyclists from Indianapolis is already going.

Tom Burnett Senior and Alec Rawls are buying full page color ads in the Somerset Daily American for both Friday the 10th and Saturday the 11th, so anyone who makes the trip will have a ready made protest sign waiting for them. Just buy a newspaper, tape the ad to a piece of cardboard, and let the massed national media know what side you are on.

That's right. With Laura Bush and Michelle Obama both attending, it's going to be a media circus, and a rare opportunity to force coverage of our issue. Just self-organize. Ad-holders will show a core of united opposition (and the media might even be forced to read our brief expose).

A PDF of the ad will be posted in another blogburst next week for anyone who wants to make signs ahead of time. There is also a set of small posters that were put together for a previous talk by Mr. Burnett. Just print with tiling to make the finished product as large or small as you want:

Board 1: The giant crescent

Board 2: It points to Mecca

Board 3: The gigantic Islamic sundial

Including a spate of dozen or so by 9/11 family members that feature some very strong comments. (See pages 198 and 199.)

Thanks to big fat repostings by Creeping Sharia and Atlas Shrugs. Thank You!


If you haven't been to Shanksville before, there really is no lovelier place on earth than an open field in that sprawling Sherwood Forest that is Western Pennsylvania. Drink it in. There is something in the air at that patriots' grave.