Flight 93 father: Ground zero mosque is the SECOND mosque being built on a 9/11 site

Pamela Geller, who is leading the fight against the ground zero mosque in New York, has posted the following letter from Tom Burnett Senior.


To our fellow 9/11 families and to all who are concerned about the Ground Zero mega-mosque in New York:

We want everyone to know that the Park Service is right now building an even larger Islamic victory mosque atop the Flight 93 crash site. Many of you were outraged in 2005 when the Crescent of Embrace design was unveiled to be a half-mile wide Islamic shaped crescent:

Left: 2005 publicity shot of the Crescent of Embrace design. Right: typical Islamic crescent and star, viewed from a similar angle.

Few people know that this giant crescent actually points to Mecca, or understand the religious significance of this orientation. A crescent that points the direction to Mecca is a very familiar construct in the Islamic world. Because Muslims face Mecca for prayer, every mosque is built around a Mecca direction indicator called a mihrab. The classic mihrab is crescent shaped. Here are the two most famous mihrabs in the world: 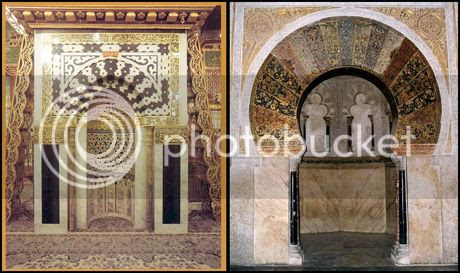 
Face into the crescent to face Mecca

As with the Medina and Cordoba mihrabs, a person facing into the Crescent of Embrace will be facing Mecca. In the image below, superimposed red lines show the orientation of the Flight 93 crescent. The green qibla circle is from an online Mecca-direction calculator: 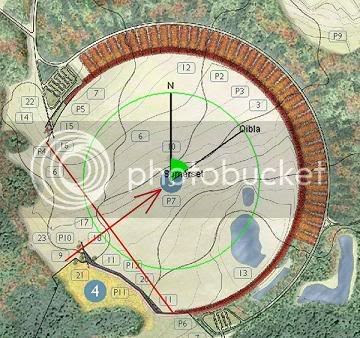 A person standing between the tips of the crescent and facing into the center of the crescent (red arrow) will be facing almost exactly in "qibla" direction (the Muslim prayer direction). You can verify the qibla direction from Somerset PA using any number of on-line Mecca-direction calculators.

To be precise, the Crescent of Embrace points 1.8° north of Mecca, ± a tenth of a degree. The final construction drawings alter this orientation slightly, so that instead of pointing a little less than two degrees north of Mecca, the actual crescent will point less than three degrees south of Mecca. Such small deviations from Mecca are insignificant by Islamic standards, which developed over a period of more than a thousand years during which far flung Muslims had no accurate way to determine the direction to Mecca.

The Park Service does not call the Crescent of Embrace a crescent anymore. Now they call it Circle of Embrace, but the only actual change was to add an extra arc of trees (planted to the rear of a person facing into the giant crescent) that explicitly represents a broken off part of the circle. The unbroken part of the circle, what symbolically remains standing in the wake of 9/11, is just the original Crescent of Embrace. It is still a giant Islamic shaped crescent, still pointing at Mecca.

This is the Park Service's official explanation for the design: the terrorist attacks are depicted as smashing our peaceful circle and turning it into a giant crescent. A clearer depiction of Islamic victory is hard to imagine, so no one should be too surprised that the damned thing points to Mecca, and actually turns out to be a mosque.

Mosque design is based on a dozen typical mosque features, every one of which is realized in the Crescent/Circle design, all on the same epic scale as the half mile wide crescent-mihrab. Note, for instance, that the 93 foot tall minaret-like Tower of Voices is topped with another Islamic-shaped crescent, akin to the crescent-topped minarets seen in many Islamic countries: 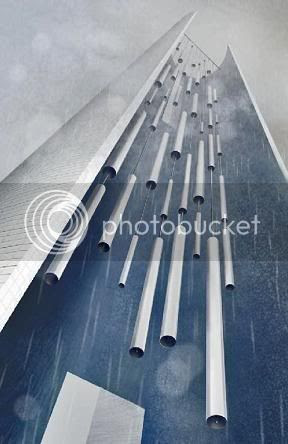 An Islamic shaped crescent, soaring in the sky above the symbolic lives of the 40 heroes, which literally dangle down below. In Islam, there is only heaven and hell. Symbolic damnation?

The Flight 93 mosque needs to be stopped, along with the Islamic victory mosque at ground zero in Manhattan. May the fight against these two desecrations strengthen each other.


Pamela's Atlas Shrugs post includes a second letter from Mr. Burnett, thanking her for her help and passing on some information about the design selection process. (The vote for was 9 to 6 from a judging panel where family members were outnumbered 8-7 by left wing design professionals.)


Want to join our blogburst against the crescent mosque?

There is also an online petition that people can sign.

We are running a non-profit site; only for the sake of information sharing.

We would be pleased with your positive response. Looking forward for your reply...

Great blog.All posts have something to learn although i am new on internet but your work is very good and i appreciate your work and hopping for some more informative posts . Thanks