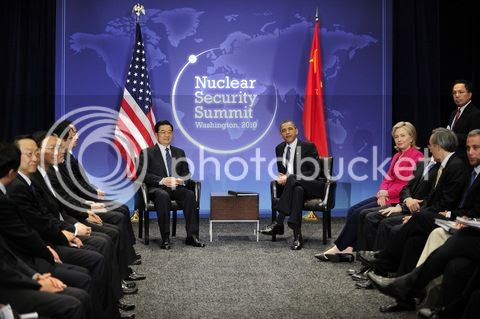 It is hard to believe that the State Department could do this by accident:

An Islamic crescent is a very distinct and completely unnatural geometric shape, combining a circular outer arc with a non-concentric circular inner arc. The unnaturalness is an Islamic religious requirement. A lunar crescent has an elliptical inner arc. Using such a natural shape as a religious symbol would risk idolatry (the worship of any actual thing besides God). Thus Muslims use as their symbol the explicitly unnatural circle-in-circle crescent shape. 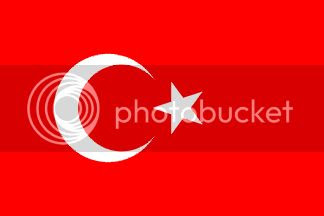 Obama's circle-in-circle NSS logo uses a thin crescent to combine the world encompassing aspect of the MAS logo with the more familiar Ottoman crescent, covering less than a full circle of arc.


Obama has ordered his underlings not to notice Islamic connections

Given that the unnatural circle-in-circle crescent is the only widely recognized graphic symbol of Islam, it must have been recognized as such by at least a significant percentage of the State Department personnel who saw it prior to the summit. Why didn't anyone object, forcefully and publicly if necessary?

It would seem to be the Fort Hood phenomenon, where witnesses to Nidal Hasan's murderous ideology were afraid that making an issue of it would be career suicide, thereby enabling Hasan's mass murder of American soldiers. Obama has now made the career suicide threat official, ordering all members of the executive branch to be as oblivious to Islam as possible. The more disturbing the Islamic connection, the more it is to be avoided, to the point where Muslim terrorists, whose reading of orthodox Islamic interpretation compels them to slaughter infidels, are no longer to be called "Muslim terrorists" or "Islamic extremists." Everyone is just supposed to ignore their Islamic motivation.

Defenders of Obama's nuclear crescent (trolls in the comments at Gateway) think that so long as the Islamic-shaped crescent can be interpreted in some non-Islamic way, there is nothing wrong with using an Islamic shaped crescent to represent American hospitality:

Oh please, folks, get a grip. It’s modeled after a hydrogen atom, you know, as in hydrogen bombs?

This issue (the existence an alternative interpretation for an Islamic shaped crescent) came up when the Missile Defense Agency's crescent shaped website logo became a news story in February. MDA spokesman Rich Lehner insists that the MDA's use of the world-encompassing circle-in-circle crescent shape "symbolizes the worldwide protection of our homeland and deployed forces." But can we really redefine the meaning of an easily recognizable symbol shape that our terror war enemies claim as their own?

By that logic, one could say that the swastika represents a helicopter rotor in motion, making a great logo for our Apache squadrons, but no such interpretation can obviate the established meaning of the symbol shape, and like the swastika, the full circle-in-circle crescent has its own established meaning (a meaning not so different from the swastika). It represents Islamic domination of the planet. For Lehner to protest that this isn't what the full circle-in-circle crescent means to him is as ludicrous and irrelevant as saying that he sees the swastika as a spinning propeller.

Ditto for the "hydrogen atom" explanation for the NSS logo. Having an alternative explanation does not change the fact that it is an Islamic shaped crescent, which every Muslim in the world will immediately recognize as an Islamic shaped crescent when they see it hoisted above Obama's summit meeting. An alternative interpretation cannot obviate the established interpretation, and the established interpretation for this very familiar symbol shape is highly inappropriate for a world meeting hosted by the United States. 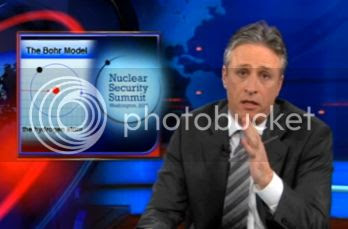 Stewart was responding to a Fox and Friends episode that arrayed the NSS logo with some Islamic flags. Fox in turn was reporting on a New York Post column by Michael Goodwin that noted the similarity to an Islamic flag. Here is the Fox video:

Not that it matters, but the NSS logo fails as hydrogen atom

Most obviously, why the gap in the electron's orbit? The only purpose of this gap would seem to be to turn the crescent into the familiar Islamic-shaped crescent.

Less obviously, notice that the fattening of the crescent at the lower left indicates visually that the electron is coming closer to the observer at that point. That would only be the case if the orbit were being observed somewhat edge-on, but that would make the orbit appear to the observer as an ellipse, not the circle seen in the NSS logo.

By the same token, since the orbit is seen as circular rather than elliptical, that means it is being observed from above (from one of the poles of the axis of rotation), which means the electron is not moving closer to and further from the observer, hence no crescent-like fattening of the arc would be observed.

The only purpose for the unnatural fattening of the circle on one side would again seem to be to create the familiar Islamic shaped crescent.

When he discovered that the MDA logo predated the Obama administration, Frank began a walk-back, which he extended to the crescent shape:

It has also been observed that – rather than embracing the symbolic crescent and star, they could be interpreted as the targets of the intercepting swoosh in the MDA’s latest logo. If so, the 2009 design would presumably be offensive to Islamists, rather than evidence of submission to them.

The unanswered question is whether the Islamic-looking logos are the product of ignorant coincidence or Islamic supremacism. There are stealth jihadists who work in the field of Islamic symbolism, like the Los Angeles architect who designed the giant Mecca-oriented crescent that is now being built atop the Flight 93 crash site. A crescent that Muslims face into to face Mecca is called a mihrab, and is the central feature around which every mosque is built. (Some mihrabs are pointed arch shaped, but the archetypical mihrab is crescent shaped.) The planned memorial will be the world's largest mosque.

Like Gaffney (sorry Frank, but you really wimped out on this one), the defenders of the crescent mosque are willing to embrace untenable excuses for their Islamic symbol shape. Asked how he could abide the Mecca orientation of the giant crescent, Patrick White, Vice President of Families of Flight 93, argued that the almost-exact Mecca-orientation cannot be intended as a tribute to Islam because the in-exactness of it (within 2° of Mecca) would be "disrespectful" to Islam.

After the cartoon jihad, Gaffney and White might be excused for thinking that Muslims will take offense at just about anything, but the fact is, orthodox Islam cares very little about how exactly anyone faces Mecca for prayer. For most of Islam's 1400 year history, far flung Muslims had no accurate way to determine the direction to Mecca. Thus it developed as a matter of religious principle that what matters is intent to face Mecca (and God).

So where did Patrick White get the idea that orientation on Mecca must be exact? From a Muslim scholar commissioned by the Park Service to answer just this question. His name is Nasser Rabbat, and he told the Park Service a flat out lie. Why? Rabbat is presumably a stealth jihadist, though he could have also been doing a personal favor for ex-classmate Paul Murdoch, the Los Angeles architect who designed the Crescent of Embrace.

This is why these possibly coincidental Islamic symbol shapes need to be properly investigated: because where there is smoke, there is sometimes fire.

Just because the Obama-like logo was not a product of the Obama administration does not mean it was not the work of a freelance Obamaton, or even an Obama-connected logo designer.

Obama started using his logo in early 2007, when it made a huge splash in the logo-design community. The contract for the MDA logo was not let until September 2007 and the logo itself did not appear until October 2008. Thus the MDA logo was designed while Obama's logo was all the rage, and given Obama's connections in the advertising industry, his people could even have exercised some direct influence over the MDA logo.

The strong Obama likeness makes it almost certain that the MDA logo was created by an Obama partisan as a tribute to Obama. From that strong prior, the likelihood that the Islamic-shaped crescent was also intentional goes up dramatically. Our president does not emphasize the "Hussein" in "Barack Hussein Obama" for nothing.

Comments:
"The only purpose of this gap would seem to be to turn the crescent into the familiar Islamic-shaped crescent."

That, or to put the Eurasian continent in overlap,

Just to show you how silly this is, I have a Sarah Palin button on my desk that is a dead ringer for one of the most common Maoist designs.

Almost 1500 words of pure BS on this non-topic. Are you kidding me?

Don't you have more important things to attend to, like picking your nose, or counting the hairs on your knuckles?

How can anyone ever take anything you say seriously after this is a sign of your handiwork?

What a clown,
FYA

Aren't you aware that this non-controversy was already debunked?

You gotta keep up with the times, buddy boy.

Just because the Obama-like logo was not a product of the Obama administration does not mean it was not the work of a freelance Obamaton, or even an Obama-connected logo designer. *** The strong Obama likeness makes it almost certain that the MDA logo was created by an Obama partisan as a tribute to Obama.

This made me laugh out loud; it's been a dreary day for me so thanks for that.

Your speculation necessarily assumes that either the U.S. Department of Defense -- which approved the logo before it saw the light of day -- was overrun with "Obamatons" in 2007-2008 or that you're more perceptive than those charged with our national security.

The colorized version is aesthetically gawdawful imo, but the black-and-white image -- that appears in the MIT newspaper announcement you linked & doesn't have the stretched blob of a background -- makes it clear that the logo represents a missile which swept around the earth (the pale blue orb) and struck its target, causing the explosion (indicated by the star) in the sky.