The original Crescent of Embrace memorial to Flight 93 faced less than 2° from Mecca. That made it a mihrab, the Mecca-direction indicator around which every mosque is built. (Some mihrabs are pointed-arch shaped, but the classic mihrab is crescent shaped.)

The Park Service dismissed concern about the Mecca-oriented crescent on grounds that the construction drawings had not yet been finalized. “Those trees could move fifty feet, or three hundred feet,” said Project Manager Jeff Reinbold in the Spring of 2006, as if this kind of "tweaking" would make any difference (Crescent of Betrayal Ch.8 p.145-6).

The construction drawings have now been released, and yes, they moved the lower tip of the half-mile wide crescent about 300 feet, enough to change the orientation of the crescent by about 4.5°. Instead of pointing less than 2° north of Mecca, the giant Islamic-shaped crescent now points less than 3° south of Mecca.

Here is the original Crescent of Embrace: 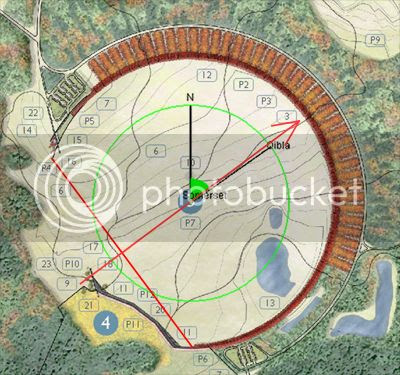 "Qibla" is the direction to Mecca, which you can verify using any online Mecca-direction calculator (just type in Somerset PA). A person standing between the tips of the giant crescent and facing into the center of the crescent (red arrow) would be facing 1.8° north of Mecca, ± 0.1°.

Here is one of the new construction drawings: 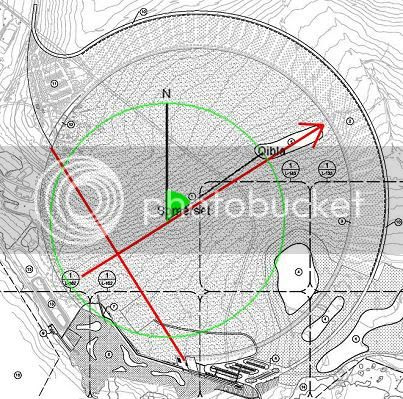 Instead of facing a titch north of Mecca, the giant crescent now faces a titch south of Mecca (2.7° south ± 0.1°).

As with the original Crescent design, the upper crescent tip is the end of the 50’ tall Entry Portal Wall and the lower crescent tip is the last of the 50’ tall Maple trees on the bottom. The landscape overlays make the details hard to see in the thumbnail image above, but at full resolution they are fully legible. (Copy of source PDF, without the superimposed orientations lines here. Large file warning. Graphic is on p. 30 of 233.)


The Park Service was SUPPOSED to remove the Islamic symbol shapes

When architect Paul Murdoch’s winning Crescent of Embrace design was announced in September 2005, it appeared to show a bare naked Islamic crescent and star-flag planted atop the crash site:

Burned by the resulting firestorm of protest, the Park Service to agreed to get rid of the Islamic symbol shapes, but they never did. They added an extra arc of trees, and they call it a broken circle now, but the unbroken part of the circle, what symbolically remains standing in the wake of 9/11, is still a giant Islamic shaped crescent.

This is explained on the Park Service's own website, where the extra arc of trees is explicitly described as a broken off part of the circle:

In summary, the memorial is shaped in a circular fashion, and the circle is symbolically "broken" or missing trees in two places, depicting the flight path of the plane, and the crash site.

Those two breaks are the two ends of the extra arc of trees: 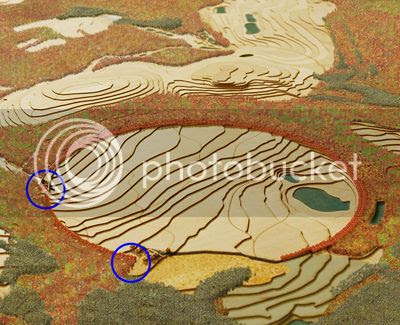 The extra arc of trees extends from blue circle to blue circle, marking the two “breaks” in the circle referred to in the Park Service’s official explanation of the broken-circle design. One is where the flight path breaks the circle (left), the other is near the crash site (center).

What is symbolically left standing (the unbroken part of the circle) is just this:

Remove the symbolically broken off parts, and you get the original Crescent of Embrace design.

The only change is that the crescent has now been rotated clockwise a few degrees. In the construction plans it faces slightly south of Mecca instead of slightly north of Mecca. For a parallel, imagine airline security discovering a terror bomber, then playing with the fit his suicide vest before escorting him to his plane.

They said they were going to remove the giant crescent. They claim they HAVE removed it, but they haven't. Symbolically, the design remains completely unchanged. The terrorists are still depicted as smashing our peaceful circle and turning it into a giant Islamic-shaped crescent, still pointing to Mecca.


The giant crescent is actually a mihrab

Here is the mihrab at the Great Mosque in Cordoba Spain. Face into the crescent to face Mecca, just like the crescent memorial to Flight 93: 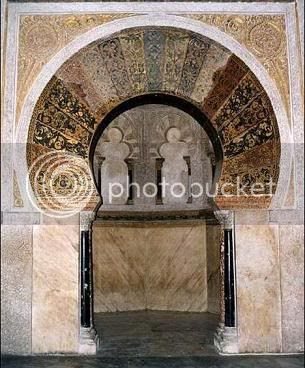 Confronted with evidence that the Crescent of Embrace is actually designed to be the world's largest mosque, the Park Service sought advice from a pair of Muslim scholars. Both acknowledged the almost exact Mecca-orientation of the giant crescent and both offered overtly dishonest excuses for it. One said not to worry about the likeness to an Islamic mihrab because no one has ever seen a mihrab this BIG before:

...most mihrabs are small, rarely larger than the figure of a man, although some of the more ornamental ones can be larger, but nothing as large at the crescent found in the site design. It is unlikely that most Muslims would walk into the area of the circle/crescent and see a mihrab because it is well beyond their limit of experience.

Right. That's why everybody scratches their head at Mt. Rushmore. No one has ever seen Abraham Lincoln so BIG before. They just can't figure it out.

To be fooled by this excuse, you have to really really want to be fooled. The other Muslim scholar said not to worry, the crescent cannot be seen as mihrab unless it points exactly at the Kaaba:

Mihrab orientation is either correct or not. It cannot be off by some degrees.

In fact, a mihrab does NOT have to point exactly at Mecca, for the simple reason that, throughout most of Islamic history, Muslims in far-flung parts of the world had no accurate way to determine the direction to Mecca. As a result, it was established as a matter of religious principle that what matters is intent to face Mecca. This was recently affirmed by Saudi religious authorities, after Meccans realized that even most of their local mosques do not face directly towards the Kaaba. “It does not affect the prayers” assured the Islamic Affairs Ministry.

Faced with evidence of an Islamic plot, why would the Park Service send this evidence exclusively to Muslims for appraisal? Have they forgotten who attacked us on 9/11?

The Service has long since been apprised of the patent dishonesties retailed by its two Muslim advisors but they don't care. They wanted to be lied to, they knew where to go to be lied to, and they got what they wanted.

So where are the patriotic stalwarts like Michelle Malkin whose objections were instrumental in getting the Park Service to agree to remove the Islamic symbol shapes in the first place? If they knew in 2005 that the symbolic outcome of 9/11 should not be a giant Islamic shaped crescent why are they silent about this exact same symbolism today, after THEY were promised that this perversion would be removed?

Ed Morrissey urged his readers "to tell the National Parks Service and the Secretary of the Interior to rethink their plans," promising for his own part that "as long as that crescent remains in the design, I’m not donating a red cent to the memorial." Well Ed, the crescent does remain in the design, so please rejoin the fight.

The desertion of Malkin et. al. makes a difficult gap to fill, but we had better fill it, or the Flight 93 crash-site will soon be home to the world’s largest mosque.