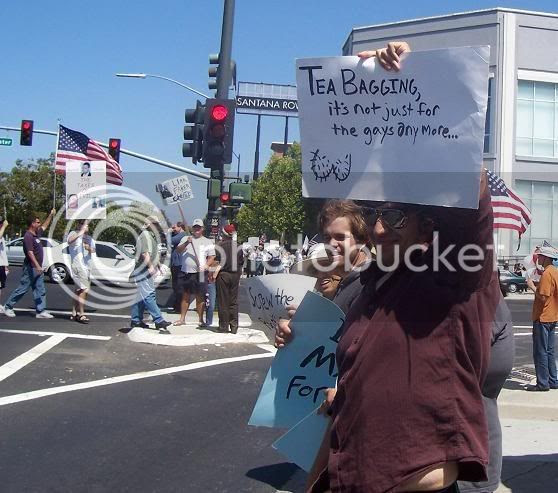 I suggest the term “dirt-baggers,” but I am altering this post to stamp the "dirt-bagger" label with the face that really deserves this coinage: Anderson Cooper.

The minor dirt-baggers at the San Jose Tea Party thought they were being funny. They should have realized how serious it is that the mainstream media made a concerted effort to tar our pro-liberty movement with their homosexual epithet. There is nothing funny about our no-longer independent media, eagerly employing the lowest techniques to smear the critics of their Obamassiah.

So vitriol where vitriol is due. It is Anderson Cooper who can't hear the term “tea party” without tittering like Beavis and Butthead over his inside knowledge of gay sexual practices that can be found on the very same page of his urban dictionary. Cooper is the original, the ultimate, DIRT-BAG:


Am working on Photoshop of Anderson on a "one dirt-bagger" coin, "shilling for Obama," "in homosexual epithets we trust," with Khalim's "tea-bagger emblem" placed as Anderson's chin. Will add here when done.


I also want to clarify my remarks about Iran. I had noted how the Iranian fellow holding the dirt-bag sign didn't care that every one of the thousand plus Tea Partiers in attendance was on the side of the democracy protestors in Iran while his hero Obama just wants Ahmadinijad and Khamenei to lock down their gulag state as quietly as possible.

Turns out these guys all have family and friends in Iran who they are very worried about. They feel that I depicted them as on the side of Ahmadinijad, which would indeed be very unfair. My meaning was very different. I was just pointing out how obtuse they were being, directing their nasty insult at all these people who they were presumably in agreement with. Best wishes for these guys' families, and for everyone in Iran who is trying to free their country from the murder cultists who have enslaved them all. 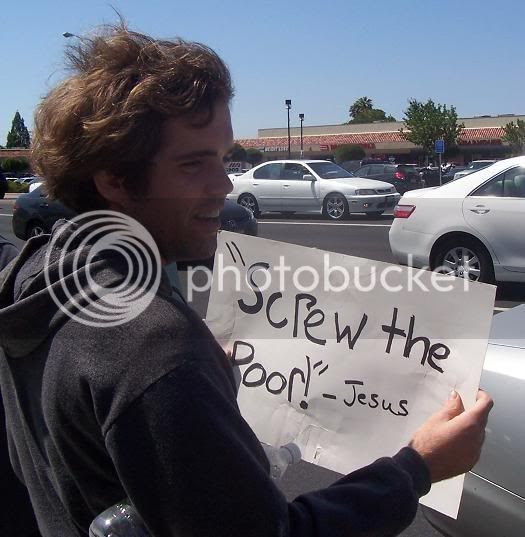 Conservatives say they dig this Jesus guy see, but since conservatives are anti-communist, they are actually anti-poor, because communism is pro-poor.

Yes, communism is so pro-poor it makes everyone poor. We are getting to learn that one for ourselves.


REAL Protest Warriors are not just genuinely clever, they are right

Here is how it is supposed to be done: The first Protest Warrior sign: not foul minded, no meretricious cant, just some obvious truth-telling that unmasks the pious frauds of the left.

The only redeeming quality of the San Jose dirt-baggers was the pretend false flag. Other dirt-baggers had called for genuine false-flag operations, so some of us knew to be on watch for leftists spouting genuinely hateful messages that the press could use to tar the real Tea Partiers.

Our dirtbaggers were not of this slanderous ilk. Their trick was just to put stinkbombs up the noses of unsuspecting readers. Any passerby expecting to read one of the usual insightful Tea Party signs was treated instead to a revolting whiff of dirt and dishonesty, apprising them immediately that these were Obamatons.

The closest I heard them come to actual false-flag activity was shouting: “Commit genocide! Kill all the Palestinians!” It would take a Jennifer Loven paraphrase to tar the Tea Partiers with that one. I can see it now: “Some demonstrators called for the extermination of Arabs and Muslims.”

Choose your side. This freedom loving family: 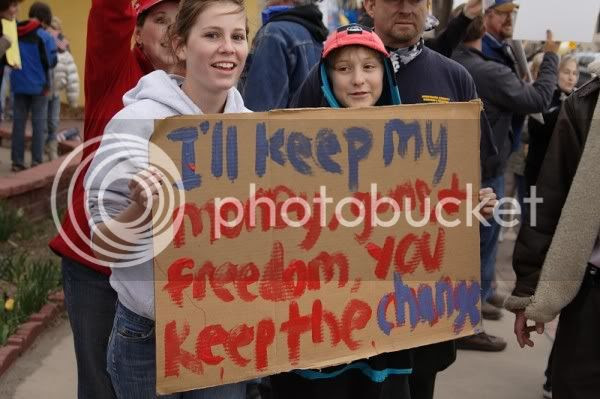 Vs. these world-class dirtbags (from the San Francisco Global Day of Action protest, March 2004, via Zombie): 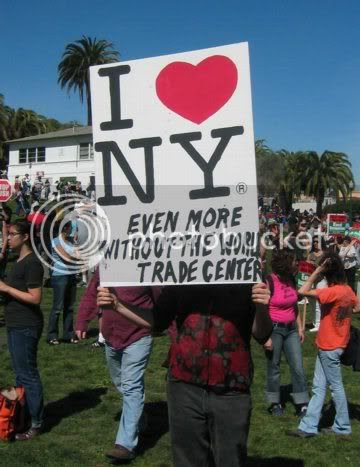 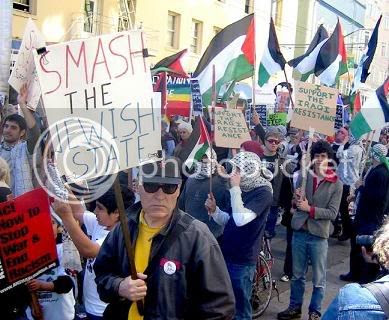 A couple of my Tea Party signs: 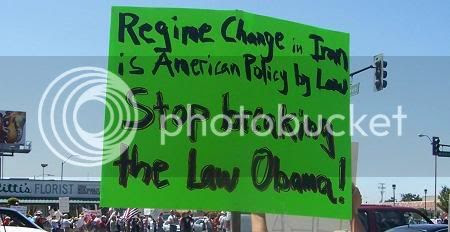 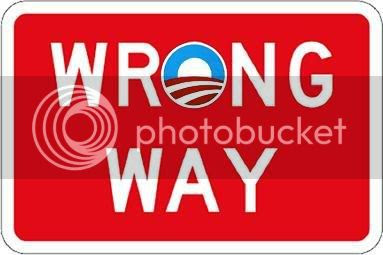 Click here for a PDF version of my Wrong Way sign that you can print out any size. If you set “page scaling” in the print window to “tile all pages” and “tile scale” to 200%, you should get a print-out on six letter-size sheets that fits a standard 22”x28” poster-board. Just trim the overlaps and apply glue-stick.

For added rigidity, make two and staple one poster to each side of a stick, then staple the edges of the two sides together, working your way in towards the stick. This will tension the sign so that it can stand up to a mild wind without bending.

Comments:
So not only are we gay communist supporters of Ahmadinejad in Iran, but we support Obama too (whom we didn't actually vote for, but why let the facts get in the way of slander, right?).

The best part is that every single characteristic you disagree with has been projected onto us, no matter how contradictory it may be. Actually, did you know our anti-war views stem from our support of slavery? Damn civil war.

And just for clarification, all three of us have friends and family in Iran right now, and all three of our hearts are with them in their struggle against Ahmadinejad.

So, no, we aren't fans of the regime.

But like I said before, it'd be a shame to let facts get in the way of a perfectly good caricature.

I didn't say that you are supporters of Ahmadinijad. I said that you don't care that the people you were making dirtball cracks at were all on the side of the Iranian people, while Obama, who we were all out there protesting, is determined to recognize the legitimacy of the usurper regime, no matter how patent its election fraud.

This is the problem I have with you guys. If you care about Iran, what the hell are you doing on the left? Why are you anti the anti-Obama protest?

You did the same thing on Iraq where you sided with the anti-war Democrats as they took FORTY votes in 2007 to de-fund our war effort and leave Iraq at the mercy of al Qaeda and Iran. If you feel any shame looking back, you wouldn't be doing the same thing again. Until you can actually get on the right side of an issue, your moral pretensions are a fraud. How hard is it to be pro-liberty? But when you see a bunch of pro-liberty folks you have nothing but contempt.

In our last exchange, Derek said it was evil for the United States to support Diem in Vietnam because Diem did not support a vote on unification with the Communists. But Diem had it right. The only moral form of government is republicanism, or the system of liberty under law. The value of democracy is entirely derivative. If it were not the best way to secure liberty, it would be thrown out. Tyranny of the majority is no better than tyranny by a dictator, thus majority rule should give way to liberty wherever it would trespass fundamental liberties (as with our Bill of Rights). This is exactly the choice that Diem faced: whether to hold a vote to end liberty.

Diem got the priority right. Here was an elected leader, leading the fight against an invading totalitarian force, choosing to be a perfect small “r” republican instead of a perfect small “d” democrat, exactly as he should have. The unelected Ho was the opposite. He spurned democracy in order to impose totalitarianism, yet according to Derek, we were evil to side with Diem against Ho.

Derek is perfectly capable of understanding that no, it is NOT wrong to be on the side of liberty, but somehow he is drawn to the illiberal side anyway. This is a common enough foible and many people have overcome it, but at some point they have to be confronted with it. They have to be called on it, so that's what I'm doing. My gift to Derek and Khalim: a big metaphorical slap in the face. You want respect? Stop siding with the liberty haters.

Maybe for the next Tea Party we can come up with some Iran signs that we can both approve of. If so, I would be glad to stand with you.

Khalim is my last name, but that doesn't really matter.

Anyway, I thought it was an anti-health care rally? So what does it matter what are views on Iran are? How does that relate to health care? Because some people on the right claim to support the people of Iran, we must walk lockstep with them on all issues?

You act as if it were some sort of racial duty...

Sorry for any other typos. I'm trying my best to do this from my phone.

Derek: Best wishes to your family and friends in Iran. I didn’t mean to make any negative imputation about your views on Iran. I was just struck by the obtuseness of insulting all these people who would be with you on what I was presuming would be an important issue for you. Obviously that obtuseness is not the whole story. Just because you are obtuse about your political opposites doesn’t mean you are obtuse about everything.

Maybe I can make it up to you. Do you want to write a guest post about your hopes for change in Iran? Maybe we can work it out.

I edited the post to re-focus my wrath on a target better deserving of full wrath: Anderson Cooper.