Only a couple more days to let the EPA know what you think of its proposed war against CO2. Just click on the little yellow “add comments” balloon. The following is a comment that you can copy and paste. (If you choose to roll your own, feel free to leave it here too.)

There is overwhelming statistical evidence that the primary driver of natural temperature change is solar-magnetic activity, yet the solar flux is completely omitted as an influence on climate in all four IPCC assessments and in the Obama administration's new "Climate Change Impacts in the United Sates" report. This omission is rationalized on grounds that the existing theories of how solar activity affects climate are still formative. The scientific method rejects this rationalization. Observational evidence is supposed to trump theory, not vice versa, but the IPCC is using theory (its distrust of existing theories of the mechanism by which solar-magnetic activity drives global temperature), as an excuse for ignoring the overwhelming evidence that solar-magnetic DOES drive global temperature. Not all religions are anti-scientific, but the demonstrably anti-scientific nature of CO2 alarmism proves that it IS religion, not science.

EPA regulations are supposed to be science based. Imposing restrictions based on an anti-scientific religious doctrine would not just violate the EPA's mandate, but would violate the constitutional prohibition on state establishment of religion.

The sunspot-temperature theory is actually looking pretty solid. It is known that a strong solar-magnetic flux shields the earth from high energy cosmic rays which otherwise, according to the theory of Henrik Svensmark and Friis-Christensen, would ionize the atmosphere, seeding cloud formation. Thus the solar wind in effect blows the clouds away, giving the earth a sunburn.

Whatever the precise mechanism, researchers have found that solar-magnetic activity “explains” statistically about 60-80 percent of global temperature change on all time scales going back hundreds of millions of years. On the decadal time scale, see the seminal 1991 paper by Christensen and Lassen (“Length of the Solar Cycle: An Indicator of Solar Activity Closely Associated with Climate”) and the 2003 isotope study by Usoskin et al (“Solar activity over the last 1150 yrs: does it correlate with climate?”), which found: “a correlation coefficient of about .7 - .8 at a 94% - 98% confidence level.”

For longer time scales, see the 2003 paper by Shaviv and Veiser (“Celestial driver of Phranerozoic climate?”), which found that found that the cosmic ray flux explains statistically about 75% of global temperature variation over the last 550 million years.

Solar activity was at “grand maximum” levels from 1940 and 2000 which, given the historical correlation between solar activity and temperature, could easily explain most or all late 20th century warming. When the IPCC and others omit the solar-magnetic variable from their models, any warming effect of solar activity gets misattributed to whatever correlated variables ARE included in their models.

By sheer coincidence, CO2 reached its own “grand maximum” levels (at least compared to the rest of the Holocene) in the second half of the 20th century. Thus in the alarmist models, whatever warming effect the omitted solar-magnetic variable is responsible for gets misattributed to CO2.

You can find rationalizations for this omitted-variable fraud in every IPCC report. For instance, section 6.11.2.2 of the Third Assessment Report does not question the correlation between solar activity and climate, but dismisses the cosmic-ray cloud THEORY as too speculative to include in their climate models:

At present there is insufficient evidence to confirm that cloud cover responds to solar variability.

But they don't just leave solar-magnetic activity out of their models. Because their forecasts are based entirely on their climate models, they also leave solar magnetic effects completely out of their climate forecasts, despite knowing that there is SOME mechanism (even if the cosmic-ray/cloud theory turns out to be wrong) by which solar-magnetic activity is the primary driver of global temperature.

The only solar variable they do include is solar output or Total Solar Insolation (from long to short-wave radiation), which does not include the solar-magnetic flux. The Fourth Assessment Report does the same thing, looking only at TSI, as do all of the analyses that follow from these reports. For instance, if you look at he “Natural Influences” subsection of the Obama administration’s new report, you will see on page 16 that the only natural influence listed is “solar output’ (or TSI), which is why it is shown graphically to be so tiny.

Solar output is close to constant over the solar cycle (less than 0.1% variation), which is why it is called “the solar constant." Because TSI is nearly constant, it cannot account for the many thousands of years of close correlation between solar activity and temperature. That must be coming from the one solar variable that DOES vary with solar activity: the solar magnetic flux. Every IPCC climate scientist knows this, yet they still omit the solar-magnetic variable. 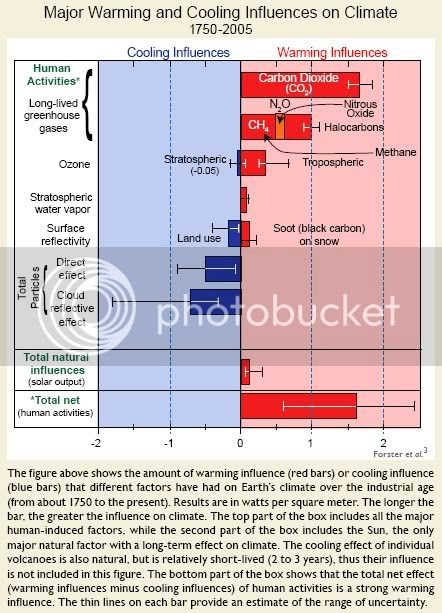 Proof of omission: page 16 graphic from the June 2009 report by U.S. Global Change Research Program (in effect, the NOAA). The only natural warming effect listed is total solar output, which does not include the solar-magnetic flux. Similar graphics can be found in each of the IPCC's assessment reports, where this analysis originates.

When the alarmists omit solar-magnetic effects on the grounds that they are not satisfied with with existing theories of HOW these effects work, they are not just committing statistical fraud, but they are contradicting the very definition of science. Observation (the overwhelming correlation between solar activity and global temperature) is supposed to trump theory, not vice versa.

Consider an analogy. Until Einstein developed his theory of general relativity there was no good theory of gravity. Newton had a description of the gravitational force (that it diminishes by the inverse of the square of the distance) but nobody had any sensible account for the mechanism by which massive objects were drawn to each other. Applying the standards of the IPCC, a pre-Einsteinian or pre-Newtonian scientist should have forecast that when a stone is released in the air, it would waft away on the breeze. After all, we understand the force that the breeze imparts on the stone, but we don't understand this thing called gravity, so we should not include it, even though we observe that heavy objects fall.

That is not science, and neither is CO2 alarmism. Data is supposed to trump Theory. By using theory (the proclaimed insufficiency of solar-magnetic theory) as an excuse to ignore the evidence (where solar activity is known to somehow warm the climate), warming alarmism perverts the scientific method.

That makes it religion in the constitutionally barred sense. Not only is this belief system embraced by millions of people WITHOUT EVIDENCE, but it is embraced in the face of overwhelming contrary evidence. Alarmism about CO2 is not just a religion, it is a demonstrably irrational religion, equivalent to believing that rocks will waft away on the breeze.

EPA is supposed to make science-based rulings. If you regulate CO2 based on demonstrably anti-scientific ideology, it will be an unconstitutional state establishment of religion.


The current cooling trend fits the solar-magnetic theory, not the CO2 theory

All of the major temperature records show that the earth's average temperature has been falling for ten years now (with the 21 year smoothed temperature falling for five). In this period, CO2 has continued to increase, while the sun has descended into a prolonged solar minimum. This turn in the sun (breaking the coincidental correlation between solar activity and CO2 that existed for the previous 70 years), is rapidly unmasking the hoax of anthropogenic global warming.

It should not take a rare astrological event to unmask an obvious statistical and scientific fraud. Will the EPA now destroy its reputation by codifying the "green" religion at the very moment when the heavens themselves are exposing its dishonesty? If you choose this course, you will be destroying the nation's economy and the lives of your countrymen in the service of your own anti-scientific religious beliefs, in violation of your oath of office.

Comments:
Alec
I thought I would pass this along. It is an excerpt taken from an article at 'Watts Up With That?'

REMINDER: The June 23rd EPA CO2 endangerment public comment deadline looms
[...]During the past few years a team of more than 650 volunteers visually inspected and photographically documented more than 860 of these temperature stations. We were shocked by what we found. We found stations located next to the exhaust fans of air conditioning units, surrounded by asphalt parking lots and roads, on blistering-hot rooftops, and near sidewalks and buildings that absorb and radiate heat. We found 68 stations located at wastewater treatment plants, where the process of waste digestion causes temperatures to be higher than in surrounding areas.

In fact, we found that 89 percent of the stations – nearly 9 of every 10 – fail to meet the National Weather Service’s own siting requirements that stations must be 30 meters (about 100 feet) or more away from an artificial heating or radiating/reflecting heat source. In other words, 9 of every 10 stations are likely reporting higher or rising temperatures because they are badly sited.

For example, here is a climate station of record located in a parking lot, at the University of Tucson, operated by the Atmospheric Sciences Department. [...]

Have you heard of Prof. Nir Shaviv in the Department of Physics at Hebrew University? He has some interesting theories related to global warming Here is good article which talks about the problems he's had getting his theories published;