Caught on video: shameful cover-up of the crescent-topped Tower of Voices

For three years, the Flight 93 Memorial Project has been relentlessly dishonest, publicly denying damning facts like the Mecca orientation of the giant crescent while making excuses for these facts in private.

Example:
Before the 2007 Memorial Project meeting, Project Partner and Flight 93 family member Patrick White was asked by the press about claims that the giant Crescent of Embrace points to Mecca. He said that all of the claims about what is in the design had been thoroughly investigated and been found to be untrue and "preposterous."

In private conversation at the meeting itself, White acknowledged the Mecca-orientation of the crescent and made excuses for it, arguing that the almost-exact Mecca orientation cannot be seen as a tribute to Islam because the in-exactness of it would be "disrespectful to Islam."

It is difficult enough to comprehend how Flight 93 family members can know that the giant crescent does indeed point almost exactly at Mecca, as critics are claiming, and still be okay with it. But White and the other Project Partners are going even further. They are knowingly covering up this damning information, and even flat lying to the public about it.

Whatever the explanation, this is what we are up against. Memorial Project participants know that the press will only cover our denunciations of the crescent design in those rare instances where we are able to mount a substantial public protest. Since the press never checks the facts, Project partners just issue whatever denials will get them through that news cycle, no matter how dishonest.

An example of this shameless misdirection was caught on video at last summer's Memorial Project meeting. Alec Rawls, who made the trip to Somerset PA along with Tom Burnett Sr. (father of Flight 93 hero Tom Jr.), directed public attention to the crescent-topped Tower of Voices. A full-color advertisement in the Somerset newspaper showed the public what the Memorial Project and the press would not: that the Tower of Voices is topped with an Islamic shaped crescent, soaring in the sky above the symbolic lives of the 40 heroes: 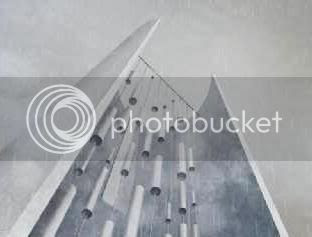 At the meeting, Patrick White castigated Rawls for showing the meeting this artist's rendering of the crescent topped tower, even as this very same graphic was on display by the Memorial Project itself just outside of the courtroom where the meeting was taking place.

White angrily denounced any suggestion that the approved plans for the memorial were indicative of what would actually be built, clearly implying that the crescent topped tower is no longer part of the planned memorial. Yet White had asserted exactly the opposite just three months earlier, when he and other family members involved with the Memorial Project declared that they would fight to build the design as approved:

Commission Chairman John Reynolds said he anticipated that people who opposed the memorial design would present a petition to throw it out.

But family members yesterday said they will work tirelessly to have the monument completed according to the design by the 10th anniversary of the terrorist attacks.

Mr. White said his group rejected any wholesale change to the design but allowed that it would have to be modified as it shifts from paper to reality.

However, Mr. White added, "They're not going to be changed based upon the idea that someone sees crescents everywhere."

This was shortly after our blogburst group started hitting hard on the crescent-topped tower, which the Project Partners are known to have been angry about. In effect, White was directly insisting that the Tower would not be changed just because people were upset about its crescent shape.

If the crescent shaped tower is actually to be removed, or changed to some other shape, that is a significant concession, and should have been widely reported, at least by the western Pennsylvania press, but it was not mentioned in any newspaper.

Has the blatant Islamic-Supremacist symbolism of the crescent-topped tower actually penetrated the thick skulls of Patrick White and his cohorts? That is doubtful. When they only faced blogosphere pressure over the crescent-topped tower, their response was angry insistence that the design would NOT be altered. The difference in August was that everyone they had to deal with face-to-face had just seen the crescent topped tower in the local newspaper. The difference was exposure.

Since the press went on to cover up what we worked so hard to expose, there is no reason to think that the Memorial Project will change the design at all. They managed to sneak their cover-up through one more news cycle, which is all they have ever cared about.

Not that any tweaking of the design could ever make it anything but a terrorist memorial mosque in any case. The Tower, for instance, will still be a year round accurate Islamic prayer-time sundial, regardless of any change to the Tower's profile. (The Memorial Project knows about this too, and makes utterly dishonest excuses for it.)

Better stand up and fight America, or there WILL be a terrorist memorial mosque on the Flight 93 crash site.