Set to another Ennio Morricone masterpiece.

Detail view shows the pair of thousand foot long, fifty foot tall, Entry Portal walls. Both walls roughly follow the line of the circle that is symbolically broken by the flight path (seen coming down from the NNE).

The hidden exact Mecca orientation of the giant crescent is only one of the ways that Murdoch proves he pointed the crescent towards Mecca on purpose (making it a mihrab, the Mecca direction indicator around which every mosque is built). He also proves intent by exactly repeating both of the Mecca orientations of his giant central crescent in the crescents of trees that surround the Tower of Voices part of the memorial.

That two different crescent structures would by chance turn out to have this exact same multi-Mecca oriented geometry is 1 in 131 billion. Just run the numbers (with some help from Mr. Morricone): 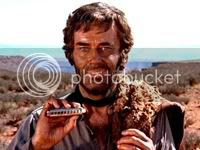 The repeated multi-Mecca-oriented geometry is just one of the many repeated Islamic and terrorist memorializing features in Murdoch's design, yet by itself it is plenty sufficient to secure Murdoch's goal of proving intent. For comparison, the latest DNA fingerprinting technique, admissible in courts of law for finding people guilty of murder, has a chance of misidentification of "one in several billion."

If Murdoch's crescent design gets built, history will not be able to deny his achievement: that he succeeded in planting a terrorist memorial mosque on the Flight 93 crash site, claiming that sacred ground for the murder-cult Islam of Osama bin Laden, Saudi Arabia, Pakistan, Iran, Hamas and Europe. Who would want to do such a thing? A substantial portion of Saudi Arabians, Pakistanis, Iranians, Palestinians and Europeans, for starters.

The previous two parts of my video series here and here.

Comments:
Keep up the good work!

Thanks. Anbody know any other top notch western music? I have now used Good, Bad and Ugly, and Once Upon a Time in the West.

Your reports are incredible. The music choice . . . not so much. Drop the music, it distracts from the message and doesn't suit the topic, being the event took place in Shanksville PA, not at the Alamo.

Theme from Little House on the Prarie

Theme from the Lone Ranger

Paladin (Have Gun will Travel

Theme from The Rifleman

Theme from The Good, the Bad and the Ugly

and then there are the
Late 1950s TV western themes

Thanks for the suggestions. I'll check them out. And thanks to the other anonymous for the feedback.

Of course, the writer is totally fair.

Hey, just looking around some blogs, seems a pretty nice platform you are using. I'm currently using Wordpress for a few of my sites but looking to change one of them over to a platform similar to yours as a trial run. Anything in particular you would recommend about it?