One of the dozen epic-scale mosque features in architect Paul Murdoch's Crescent of Embrace design is a year-round accurate Islamic prayer-time sundial. The shadow calculations take a bit of work to verify, but the overt similarity is immediate: 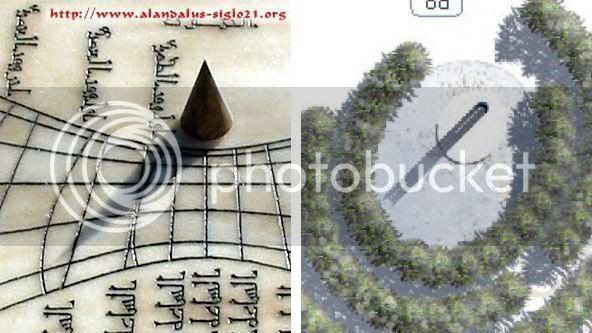 Traditional Islamic sundial, left. The gnomon's shadow is just reaching the outer curved vertical, indicating time for Islamic afternoon prayers. On the right is a plan view of the Tower of Voices part of the Flight 93 memorial. Shadow calculations confirm that, when the tower's shadow reaches the inner arc of trees, it will also be time for Islamic afternoon prayers.

An Islamic sundial is a very exacting structure that would be nearly impossible to construct by accident. Islamic prayer times are determined by shadow length, so the prayer-time indicator line must be placed a particular distance from the gnomon, and must follow a particular arc.

It turns out that architect Paul Murdoch's also put an Islamic sundial in his preliminary crescent design (from before he was chosen as a design competition finalist). This first Islamic sundial was to have been situated a few hundred yards away from the sundial in his final design, and instead of being surrounded by a vast array of crescents of trees, Murdoch's first sundial just used a single arc of trees, laid out along the tower's afternoon prayer line. Here is the first incarnation of the Tower of Voices:

The view here is facing south, along the entry road. The Tower opens to the northeast.

The plan view shows a tree-line to the east of the tower that appears to be at least roughly the shape of the prayer line on an Islamic sundial: 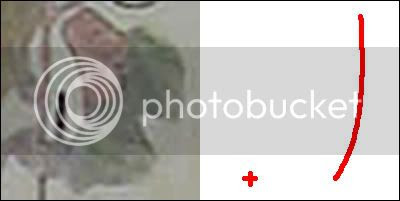 Left hand image: the tower sits at the bottom of the north-south rectangle of black rock. Right hand image shows the shape of the afternoon prayer line for an Islamic sundial, generated by Fer de Vries' ZW2000 sundial computer. It is calibrated to the crash site latitude of 40.03 north. Fer's red X marks the center of the gnomon. The prayer-line image gets scaled up or down depending on the gnomon height.

Scaling the image to give the best fit to the tree line to the east of the tower, the fit is just about perfect when the gnomon height is set to 86 feet:

If an 86 foot tower is placed at the flashing red cross, then when the tower's shadow reaches the base of the line of surrounding trees, it will be time for Islamic afternoon prayers. (Details below on how to determine this scaling.)


Does the Stage I Tower of Voices have a gnomon height of 86 feet?

Very likely. The Stage I design does not specify the height of the tower, but in the elevation view above it looks to be 90 or 100 feet tall, and in Murdoch's final design, the tower height is 93 feet, which seems the likely height here.

Take a look back at the elevation view of the tower and you'll see that the it has a crescent shaped top, with two arms reaching up maybe 6 or 8 feet above the low point of the crescent. The consistent gnomon point would be the low center point, which would be pretty close to 86 feet, if the full tower is 93.

Thus this LOOKS to be another year-round accurate Islamic prayer-time sundial. What we can say for certain is that Murdoch is within a minor height adjustment of having a second year-round accurate Islamic sundial. Given the specificity of these sundial shapes, that can't possibly be coincidence, demonstrating that Murdoch had a terrorist memorial mosque in mind from the beginning.

Of course that had to be the case, given that a terrorist memorial mosque is what he ended up designing, but this is the first clear indication of Islamic intent going back to the preliminary design itself. Murdoch's repeated Mecca orientations and the other elaborate proofs of terrorist memorializing intent don't appear until the Stage II design.

In his final Crescent of Embrace design (now called a broken circle), Murdoch is systematic about hiding geometrically precise Islamic structures behind seemingly imprecise Islamic symbol shapes. For instance, the giant central crescent does not point exactly at Mecca. It points 1.8° north of Mecca, ± 0.1°, making it a not quite precise Islamic mihrab.

But Murdoch also includes a thematically defined crescent in his design. It starts where the flight path thematically breaks the circle at the upper crescent tip, which more than a hundred feet from the end of the full Crescent of Embrace structure. That hundred foot plus change in the end-point of the crescent alters the orientation of the crescent by exactly 1.8°, so that the "true" thematic crescent points exactly to Mecca, as closely as can be determined given the pixel resolution of the graphics. Murdoch then provides redundant proof of intent by repeating this whole multi-Mecca oriented geometry in the crescents of trees that surround the Tower of Voices. (Demonstration in the 2nd half of this post.)

Murdoch does the same thing with the Tower sundial. On first look, the inner arc of trees in Murdoch's final Tower of Voices design is only an accurate marker for afternoon prayer times for 8 months of the year (from March to October). But upon further inspection, one sees that Murdoch used a tricky two-height gnomon, where light passes through a slot in the top of the tower from November to February, lowering the gnomon point at the center of the crescent topped tower for those months.

In the preliminary design, Murdoch was not so careful. His tree line follows the full traditional Islamic afternoon prayer line shape, which any informed person could immediately recognize.

The chances of Murdoch coming up with TWO different year-round accurate Islamic sundials by coincidence? 0/(∞2).

Islamic afternoon prayers commence when an object's shadow is the length of its noon shadow, plus its height. As summer turns to winter, noon shadows get longer, so the shadow length at prayer time gets longer too. Also, shadows lengthen more quickly, so the time it takes the noon shadow to grow by the gnomon height gets shorter, making prayer times occur earlier. Thus the angle of the prayer-time shadows gets more northerly (earlier) as the days get shorter, creating the characteristic prayer-line arc.

The labor intensive way to calculate prayer times is to use J Geisen's awesome sun-shadow applet to find the length of shortest shadow for a particular gnomon on an particular day at a particular latitude and longitude, then look for the time and shadow angle at which the gnomon's shadow is the length of its noon shadow plus its height.

The easy way is to let Fer de Vries' ZW2000 computer program do the work for you. Just download the zip files, right click the folder and extract all the files, then open the program, set the latitude to 40.03 degrees (shanskville PA), check "Islamic prayer lines," click calculate, and set the scale so you can see the result. (The bigger the gnomon height you pick, the more you will have to scale the resulting graphic down to bring the prayer lines into the picture). Really easy.

In addition to generating prayer lines, De Vrie's program also generates a bar that is equal in length to the gnomon height. It is visible in the bottom right corner of the graphic above that shows the prayer line superimposed over the tree line. That gnomon-height reference line makes it possible to scale the image of the gnomon point and its associated prayer line to the site-plan image.

Once the graphic is resized so that it fits over the estimated gnomon point and the tree line, the gnomon height bar scales out to 2.41 inches. (It looks a bit bigger, but that is just because it was bolded, which makes the length grow along with the width.) 2.41 x 35.714 = 86'.


The Memorial Project claims that it investigated the sundial warnings and found them to be a false alarm, but their comments prove that they never even looked at the warnings

Memorial Project Chairman John Reynolds said last year that any tower with a wall around it can serve as an Islamic sundial. When prayer time comes around, just mark the wall with the angle of the tower's shadow, and voilà.

FAIL. Islamic prayer times are determined by shadow length, not shadow angle, and the shadow angle at prayer time changes every day of the year. It CANNOT be marked on any old wall around a tower. An Islamic prayer-time marker must be set the right distance from its associated shadow-caster, and it must follow the right arc.

Imagine telling the public you have investigated a warning of terrorist attack and found it to be a false alarm, when in fact you never investigated it at all? That is what Reynolds is doing when he claims to have investigated the warnings of an Islamic sundial, when he doesn't even know that Islamic prayer times are determined by shadow length. The irresponsibility of these people is breathtaking.

Pretty effective piece of writing, much thanks for your article.

I am not sure where you’re getting your information, but great topic. I needs to spend some time learning much more or understanding more. Thanks for great info I was looking for this info for my mission.