"They had some forewarning and they chose to take action." The defenders of the crescent also have forewarning, and are trying to cover it up.

Gordon Felt, president of the Flight 93 family group that supports the crescent shaped memorial, offered a nice summary statement of the heroism of Flight 93:

They had some forewarning and they chose to take action.

"It's that citizen soldier, heroism message," he said "that we want to get out and memorialize their actions."

Mr. Felt also has forewarning of an enemy plot, but he and the other defenders of the crescent design are choosing not to act. They are displaying a perfect anti-spirit of Flight 93.

According to Flight 93 Advisory Commission member Tim Baird, they all know that all of our basic claims about the crescent design are accurate: the Mecca orientation of the giant crescent; the 44 translucent blocks that are to be placed along the flight path, etcetera. Yet they and their allies in the press are doing everything in their power to keep the public from knowing what they know.

In last week's anniversary coverage of the 9/11 attacks, the Johnstown Tribune Democrat noted the controversy over the orientation of the crescent. We say it points to Mecca. The Park Service denies it:

The project also has been dogged by complaints spearheaded by California author Alec Rawls that the memorial points to Mecca and is a veiled tribute to the Islamic terrorists – a claim family members and developers maintain has been investigated and refuted.

What reporter Kirk Swauger fails to mention is that he himself fact-checked the Mecca-orientation claim last year, and published his findings:

Rawls maintains that the midpoint between the tips of the crescent points almost precisely toward “qibla,” the direction to Mecca, which Muslims are supposed to face for prayer.

His claims seem to be backed up by coordinates for the direction of qibla from Somerset that can be found on Islam.com. When superimposed over the crescent in the memorial design, the midpoint points over the Arctic Circle, through Europe toward Mecca.

This is the only instance in three years now where any news organization has ever published any fact-checking of our easy to fact check claims about the memorial design. Alec has several times emailed Kirk's published confirmation of the Mecca-orientation to every newsdesk in Pennsylvania and to every reporter covering the memorial story. They ALL know about it. Yet even Kirk continues to present the Mecca orientation claim as a "he said, she said" conflict, without letting his readers know that he has verified the Mecca-orientation for himself (and this isn't the first time he has made this omission).

If Mr. Swauger really wanted everyone to forget his confirmation of the Mecca-orientation, he could just avoid any mention of the orientation of the crescent at all. Alec's best guess is that Kirk is being held back by Tribune Democrat editor Chip Minemyer, who has tried to sweep the memorial controversy under the rug from day one, but the reporters are also neck deep. Several have suggested that to investigate and report on the accuracy of our claims would be taking sides. Of course that phony "scruple" would disappear in a second if the facts showed our criticisms to be bogus.


Example 2: Gordon Felt himself misled the public about the 44 blocks.

The Crescent of Embrace design, now called the (broken) Circle of Embrace, calls for a total of 44 inscribed translucent memorial blocks to be placed along the flight path. (There were forty passengers and crew on Flight 93 and four terrorists.)

In trying to get this information out to the public, we need to be brief, so "44 inscribed translucent memorial blocks" sometimes gets shortened to "44 glass blocks," or "44 blocks." Asked last spring about the 44 blocks, Gordon Felt declared it a lie:

Opponents also claim there is a plan to have 44 glass blocks — for the 40 victims and four hijackers — in the design.

“That’s an absolute, unequivocal fabrication that is being portrayed as fact,” said Edward Felt’s brother, Gordon Felt, president of Families of Flight 93. “It’s misleading and helps drive the conspiracy theory.”

But he follows this denial with a footnote, indicating that he knows full well that there will be 44 memorial blocks:

Felt said the names of the passengers and crew will be placed on the memorial, but no final decision has been made on how they would be displayed or on what material.

In other words, he is nit-picking over our occasional description of the blocks as "glass blocks," when they might not all be technically made of glass.

As Alec's original report to the Memorial Project made clear, 43 of the blocks are described in the design drawings as "polished, translucent white marble": 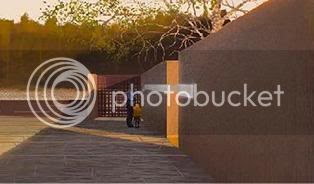 That upper section of wall, by the way, is centered on the bisector of the giant crescent, placing it in the exact position of the star on an Islamic crescent and star flag. Thus the date goes to the Islamic star. The date goes to the terrorists.

Here is the 44th block on the flight path. It marks the upper crescent tip, where according to the Park Service's own website, the flight path symbolically breaks our (Christian) circle, turning it into the giant (Mecca oriented) crescent. A clearer depiction of al Qaeda victory is hard to imagine, and it all comes together right here:

At the end of the Entry Portal Walkway (after the walkway symbolically "breaks" the towering Entry Portal Walls) sits a large "glass memorial plaque" that dedicates the entire site.

This 44th translucent block on the flight path marks the spot where the terrorists symbolically broke our harmonious circle and turned it into a giant Islamic shaped crescent. To be inscribed: "A field of honor forever."

Apparently grief has made these people crazy. They have forewarning, and are struggling with all their might to keep others from being forewarned as well.

Comments:
When the first satellite was sent up in the late 1950's, my parents gave me a world globe. This globe (made by Replogle) had a metal ring attached to the frame. This ring was movable so you could position it over any combination of North and South latitudes. So - you put the ring on the globe's frame at lat. 40 North and put the other side of the ring on the frame at lat. 40 South. Then you could rotate the globe underneath the frame and ring. Why? Because it would show you a Great Circle Route, and you could calculate the paths of satellites. Back then, 1960, our newspaper would list the times when Sputnik, etc. would be passing over. Well, guess what? I still have that globe. And if I move the globe, latitude frame, and Great Circle ring so Shanksville is underneath I can see how any structure on the ground can be oriented toward any point on Earth. Amazing, I learned enough as a child to see that the two crescent features (Tower crescents and tree groves crescent) point toward Mecca.

Well well. Look who turned out to be a closet Muslim jihadist!
Allah Akbar Mr. Rawls!