When the passengers and crew of flight 93 smashed their murderers to nothing on an open expanse of western Pennsylvania coal country, two towering sentinels stood silent witness to the heroic tragedy.

“Up on Skyline Rd.,” the news shot around Shanksville and Somerset, “up by the drag lines”: 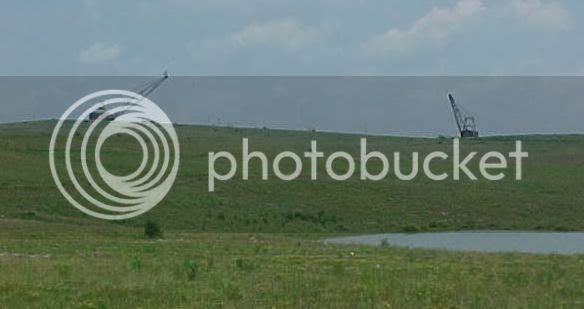 The drag lines, as seen from what will be the center of the giant Mecca-oriented crescent that is to be planted on the flight 93 crash site. (Photo by Alec Rawls, 2006.)

It is hard to imagine a more fitting marker than these twin colossi. Before the hijackers could send Flight 93 into the White House or the Capitol building, a random draw of forty of our fellow countrymen massed a towering determination to fight back. Their effort to save their own lives ended beneath those artifacts of Pennsylvania's own native grit and ingenuity, but their success in defending their country will live forever.

Those silent sentinels could and should have endured as well, and they would have, if not for one man who was determined to see them go: architect Paul Murdoch, the designer of the terrorist memorializing Crescent of Embrace design. As the press reported at the unveiling of the crescent design:

The Flight 93 temporary memorial, the draglines and Skyline Drive will be removed to leave the landscape as natural as possible, Murdoch wrote in a narrative that accompanied the design.

The drag lines were supposed to stay

The presumption from the beginning was that the drag lines would stay. They were actually the first items of property purchased for the new national park.

Several draglines still stand there, idled since the crash interrupted the mine work. Randy Cooley, director of the Southwest Pennsylvania Heritage Preservation Commission, said that equipment should stay, as part of the story the memorial will tell.

The excavating machines often are the first things visitors to the memorial site see, he said. The booms rise high over the field. They cast shadows, and show what the land once was.

"They're touchstones," Cooley said. "For many of the people on that plane, that may well have been the last thing they saw." [2003]

They were also meaningful to the local population:

The cranes, which served as drag lines for a long-idled strip mining operation, are synonymous with the area, residents said.

"When I think of (Skyline Drive), I think of those drag lines," said Erica Zeigler, president of Shanksville Borough Council. "They're something everybody around here associated with that road." [2005]

Memorial Project manager Jeff Reinbold acknowledged the hard feelings about the removal of the drag lines:

"You wish you didn't have to do it. But this was a celebration of the process," he said. [ibid.]

Why was Murdoch determined to have the drag lines gone?

Because a crescent that Muslims face into to face Mecca is called a mihrab, and is the central feature around which every mosque is built. (Some mihrabs are pointed-arch shape, but the prototypical mihrab is crescent shaped.)

Very simply, Murdoch could not allow his terrorist memorial mosque to be tainted by extraneous infidel artifacts. Those drag lines would have risen up right behind the giant mihrab, disturbing what is supposed to be an undisturbed space within which the Muslim believer can turn face his god for prayer.

Perhaps worst of all from Murdoch’s perspective was the huge American flag that coal miners attached to one of the booms the week after 9/11: 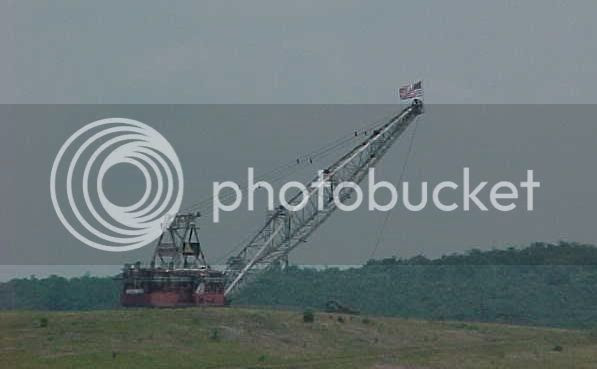 Unacceptable: the jihadists turn to face their god, and see… an American flag?

This mosque interpretation is no stretch. Murdoch provides endless redundant proof of intent, as when he repeats the Mecca orientation of his giant crescent in the crescents of trees that surround the Tower of Voices part of the memorial.

When the hijacker is finally tackled and we have a chance to turn to less critical matters, like how to design a proper memorial to OUR heroes instead of to Paul Murdoch’s heroes, one of the costs to be accounted will be the loss of the iconic drag lines. At least Murdoch was not able to destroy them entirely, as 22 tons of steel from the scrapped machinery is being used in the construction of the USS Somerset: 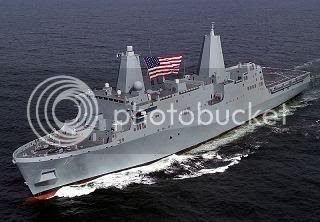 The USS Somerset will be a sister ship of the USS San Antonio (seen here), so the drag lines will still be hoisting a flag.

Interestingly, the single physical requirement set down for design competition entries was that they should respect the rural landscape and leave it as it was. Paul Murdoch’s crescent design is the only one of a thousand entries that violates this lone rule, first by building a raised causeway across the wetlands (necessary to extend his crescent to the full typical Islamic crescent shape, covering 2/3rds of a circle of arc), and then by excising the drag lines, which everyone agreed were central to the historic nature of the site.

Comments:
Im sure the person who ordered the memorial works for or is the person who paid for the 9/11 attacks to go down... they are part of a pentagram covering 1/3 of the US in american blood...
http://s3.supload.com/free/wowza.jpg/view/

Wonderful article. It is useful for me, thanks a lot for giving everyone an exceptionally splendid possiblity to read in detail from this blog. I really enjoy reading in your blog!

This is a memorial to honor the Americans . Not the terrorist . Who cares if the Muslims turn to see there Pagan god.No there is 2 Beautiful AMERICAN MADE Draglines, that call that plot of ground home and Now they stand as sentinels over the brave soles that stood up for their Country and took down those who wish to destroy it.
The Draglines should stay.