Three segments of American society get paid to investigate and report facts: academia, the press, and government. For two and a half years, all three have been spinning desperately to avoid and suppress the facts about Islamic and terrorist memorializing symbolism in the Flight 93 memorial.

Luckily there is a fourth segment of society that is also charged to witness truth, not for pay, but on religious principle. Asked by Pilate to account for himself, Jesus answered:

To this end was I born, and for this cause came I into the world, that I should bear witness unto the truth. [Jn. 18:37.]

Those who follow Jesus are supposed to do the same, which means first of all checking and reporting the facts when the importance of an issue warrants it.

The importance of the Flight 93 memorial to our churches could not be clearer. The Islam of the al Qaeda terrorists who attacked us on 9/11 is a religion of murder and deceit. Their self-professed strategy is to hide amongst us, pretending to be trustworthy friends, while plotting mass-murder against Christians, Jews, and all non-Muslims.

In a contest between deceit and honesty, there is no doubt which is stronger. Witness exposes and destroys deceit. If our churches enter this contest, they win. But will they enter? THAT is the test. If our churches stand by, and fail to witness truth, then the al Qaeda religion of murder and deceit may well succeed in stabbing its terrorist memorial mosque into the heartland of America.

In consultation with Tom Burnett Sr., I put together a flyer that all of us can take to our local churches to try to organize sanctioned fact-checking efforts that our churches can stand behind publicly two months from now.

August 2nd is the next public meeting of the Memorial Project. Tom and I will both be traveling to Somerset PA to rally opposition. Mancow Muller is urging his national radio audience to attend, and groups like Rolling Thunder are also being contacted.

With Mr. Burnett in attendance, even a modest turnout will bring substantial news coverage, but coverage alone is not enough. We are facing a fact-checking blockade by the mainstream media, and can only break it by enlisting churches or other independent groups to sponsor their own fact checking efforts.

Are you a member of any kind of group where interested members could set up an ad hoc committee to check a few basic facts about the planned memorial? The full group or chapter could then make an official decision whether to stand behind this fact checking publicly in a press release that Tom and I can announce at the August meeting.

Christian churches may be our best bet, being charged by Jesus to be witnesses for truth, and having "chapters" all over America. Thus this initial effort is addressed in particular to our churches, but any group that wants to expose important truths can perform the same service.

The flyer prints out front and back on a single sheet of paper. It has a couple of color graphics, but prints fine in black and white for inexpensive copying. If you want to participate, just add your contact info at the bottom (the file is MS Word and can be altered), then go see if you can raise some interest!

The rest of this post is an HTML version of the flyer that can be copied and pasted into email.

The Flight 93 memorial is a terrorist memorial mosque!

Witnesses for truth NEEDED to check and report the facts

The father of one of our Flight 93 heroes is asking America’s churches for help.

Remember the Crescent of Embrace design for the Flight 93 memorial, laid out in the configuration of an Islamic crescent and star flag? 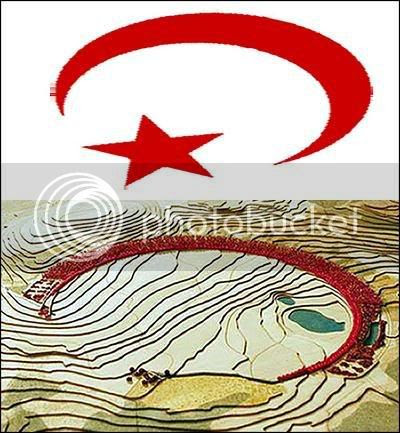 Outrage over this clear Islamic symbolism forced the Memorial Project to agree to make changes, but all they did was slightly disguise the giant crescent. It is still described as a “broken circle,” and the unbroken part of the circle (the crescent) remains exactly as it was.

It turns out that this half-mile wide crescent points almost exactly to Mecca. A crescent that Muslims face into to face Mecca is called a mihrab, and is the central feature around which every mosque is built. The Flight 93 memorial will be the world’s largest mosque by a factor of a hundred.

The design also includes numerous terrorist memorializing features, like the 44 inscribed translucent memorial blocks that are to be placed along the flight path (matching the number of passengers, crew, AND terrorists). Tom Burnett Sr. does not want Tom Jr.’s name inscribed on that terrorist memorializing sequence, and is leading the effort to have the crescent design scrapped completely.

The obstacle is the three parts of our society that we pay to check and report the facts: academia, the press, and government. All three are spinning desperately to keep the truth suppressed here. On the rare occasion when the Mecca-orientation claim or the 44 blocks claim gets in the newspaper, some left-wing academic or a spokesman for the Memorial Project is quoted denying it, but the press never checks and reports the facts.

It takes less than two minutes to verify that the giant crescent DOES point to Mecca. Just open up the Mecca-direction calculator at Islam.com and print out the direction to Mecca from Somerset PA (ten miles from the crash site). Place it over the crescent site-plan on your computer screen, and you’ll see that the Mecca direction line bisects the crescent: 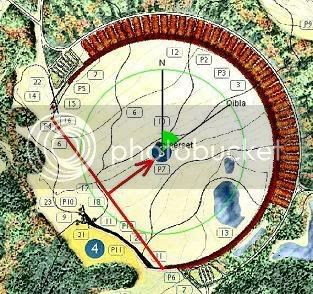 Stand midway between the crescent tips and face into the center of the crescent (red arrow) and you will be facing almost exactly at Mecca (“qibla”). (Click pic for animated demonstration.)

It is even easier to verify the 44 glass blocks on the flight path: just open up the design drawings and count. It is easy to check the numerous repeated Mecca orientations; the placement of the 9/11 date in the exact position of the star on an Islamic flag; etcetera.

This deceptive memorial to the 9/11 terrorists is a direct challenge to the truth witnessing capacity of our society, and to the truth witnessing character of our Christian churches. There is no doubt which is stronger. Witness exposes deceit. If our churches enter this contest, they win, but if they stand by, and fail to witness truth, then deceit wins.

Mr. Burnett and his compatriots will be rallying in Somerset PA on August 2nd at the next public meeting of the Memorial Project. The resulting news coverage can be used to break the media blockade on fact checking, so long as at least a few churches are willing to sanction fact-checking efforts and release their findings to the public.

Please volunteer for this fact-checking effort, and help to promote it amongst pastors and parishioners. America needs its First Estate (its churches) to take a leading role, and witness the truths about this terrorist memorial that our media elites are trying to hide.

Comments:
Even though they know the reality of the situation, they haven't done anything to fix it, and the problem is becoming uncontrollable.

I like it very much because it has very helpful articles of various topics like different culture and the latest news. I am a googler and search on many topics. By searching i found this nice website. Thanks for sharing.