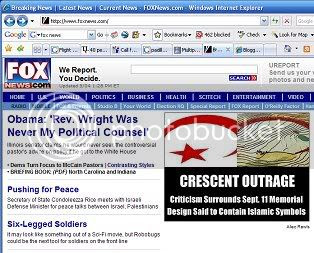 Check out the Fox News front page today, where "Crescent Outrage" alternates top billing with "Six-Legged Soldiers!" Finally, more than a handful of Americans will at least know that there is a controversy over the Flight 93 memorial.

The text report DOES show the side-by-side comparison of the Crescent of Embrace and the Islamic crescent and star insignia. It also reports Tom Burnett's condemnation of the crescent design as an insult to his murdered son, and it mentions our petition.


UPDATE: Red Lasso has the Fox News video clip (thanks to Avid Editor):

This is powerful stuff. Not only do they show the clear likeness between the original design and an Islamic crescent and star flag, but the image they show of the redesign shows pretty clearly how the giant crescent remains intact in the redesign: 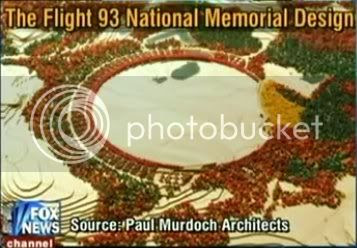 From the crescent and star likeness, they cut to Tom Burnett, asking what people would think if a memorial were laid out in the shape of a swastika. If viewers hadn't just seen the crescent and star likeness, that statement could be made to sound crazy, but Fox does right by Tom, giving viewers the information they need to see the reasonableness of the comparison. Many thanks to Fox for getting this right.

Fox has a lot more information at their disposal. They had a television crew at the Somerset County Courthouse yesterday where Colonel Harry Beam laid out a precise and devastating exposé of Islamic and terrorist memorializing design features, and they were sent extensive fact checking materials. None of this gets into their present reporting, but if they use it for an investigative feature, they can knock the crescent memorial out for good.


UPDATE II: Avid Editor found another completely different Fox News segment on Red Lasso. This one is even better, mentioning the Mecca orientation of the giant crescent!

Finally! This story is getting some attention.

Thanks to your not giving up, Alec.

Alex, you may want to consider adding your information to the Wikipedia entry page. There is not enough evidence on the controversy section. It looks just opinionated.

Hi from Somerset (Bill I.) Saturday's memorial design meeting was heavily covered - all local TV news (2 KDKA, 4 WTAE, 6 & 8 & 9 WJAC, and 10 WTAJ), and from NYC to San Francisco, Seattle to Tallahassee. Here are some text clips and web links:

The Families of Flight 93 launched a preemptive strike Friday against memorial design opponents who plan to present petitions today at a joint meeting of the Flight 93 Memorial Task Force and the Flight 93 Federal Advisory Commission.
Relatives of four people who were on Flight 93 held a press conference in Pittsburgh to say they are fed up with the controversy surrounding the design.
Tom and Beverly Burnett, parents of Tom Burnett Jr., have opposed the design since it was selected in 2005, because they believe it includes Islamic symbols that pay tribute to the terrorists. Their cause has been taken up by Internet bloggers.
Patrick White, vice president of the Families of Flight 93, said the Burnetts are the only members who have expressed opposition to the design. He is a cousin of Louis “Joey” Nacke.
===>
http://www.post-gazette.com/pg/08124/878937-100.stm?cmpid=latest.xml
Some Flight 93 families still see memorial conspiracy
Saturday, May 03, 2008
By Jerome L. Sherman, Pittsburgh Post-Gazette
SOMERSET, Pa. -- Opponents of the proposed United Airlines Flight 93 memorial today presented a petition with more than 5,000 signatures of people who believe the design contains Islamic symbols - such as a crescent - and should be scrapped.

"It is truly unfortunate that I must come a third time to warn that you are about to make a terrible mistake in moving the chosen Flight 93 memorial design to construction," Bill Steiner, of Mt. Pleasant, told a meeting of the advisory commission for the memorial at the Somerset County Courthouse.
Mr. Steiner said he was speaking on behalf of Tom Burnett Sr., whose son died when the plane was hijacked by terrorists and crashed in a field in Shanksville on Sept. 11, 2001.
===>
International Herald Tribune
http://www.iht.com/articles/2008/05/04/america/shrine.php
Design of a memorial to Flight 93 fuels tension between families

SOMERSET, Pennsylavia: Sandra Felt has known for nearly three years about complaints that the design of the proposed Flight 93 National Memorial allegedly contains Islamic symbols, but she never gave them any credence.

"I don't even think about it," said Felt, whose husband, Edward, died on Sept. 11, 2001, when United Airlines Flight 93 crashed in a field near here as passengers struggled with Islamic terrorists for control of the plane, believed to be headed to a target in Washington.

the most important thing . . .is not what the memorial looks like...

If it really didn't matter what the memorial looked like, why stand in the way?

The family members that stand by Murdoch's design need to understand that it is not their uninformed vote that we are upset about. No one is upset with them for thier initial vote. They weren't expected to know or understand or recognize the symbolism utilized by this professional architect.
That these Flt. 93 families uniformly take our objections personally wreaks of emotional manipulation.

You guys are idiots! Lets shape the memorial like a cross, so you can jerk off to its honorable image every night before you sleep. Amen!