Tom Burnett's letter to the American people is bringing lots of signatures for our online petition. People can also join our blogbursts here

Time to emphasize the ugliest aspect of the terrorist memorial mosque that is now being built in Shanksville Pennsylvania. It does not just INCLUDE the terrorists in some kind of reductio ad absurdum of multiculturalist moral relativism. Actually, there is not a single speck of moral relativism in the entire design. Rather, the terrorists are explicitly championed, while the 40 infidels are again and again depicted as symbolically damned to Islamic Hell.

This is the evil genius of architect Paul Murdoch's use of the crescent and star layout. Everywhere the four hijackers are memorialized, they are symbolically placed inside the Islamic heavens (the crescent and star parts of the memorial). Everywhere the 40 infidels are memorialized, they are represented outside of the symbolic Islamic heavens, which in Islam signifies damnation.

In most instances, the immense scale of the design makes this theme difficult to grasp from ground level unless you know what to look for. The one exception is up at the Tower of Voices part of the memorial, where the symbolic damnation of the 40 heroes will be immediately visible to visitors.

The 93 foot tall Tower of Voices is formed in the shape of an extruded crescent, cut at an angle at the top so that its crescent arms reach up into the sky: 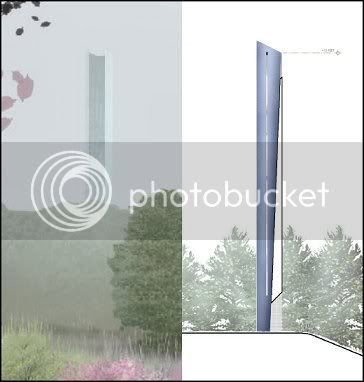 As seen from the base of the tower, the top of the tower will be a clear Islamic-shaped crescent, projected against the sky above. Hanging down below these symbolic heavens will be forty tubular steel chimes, one for each of the murdered passengers and crew. In Islam, if you don't go to Heaven, you go to Hell, thus those forty symbolic souls, strung below the symbolic Islamic heavens like fish on a line, are symbolically damned.

The imagery could not be clearer. Here is what hundreds of thousands of visitors will see when they look up the crescent tower: 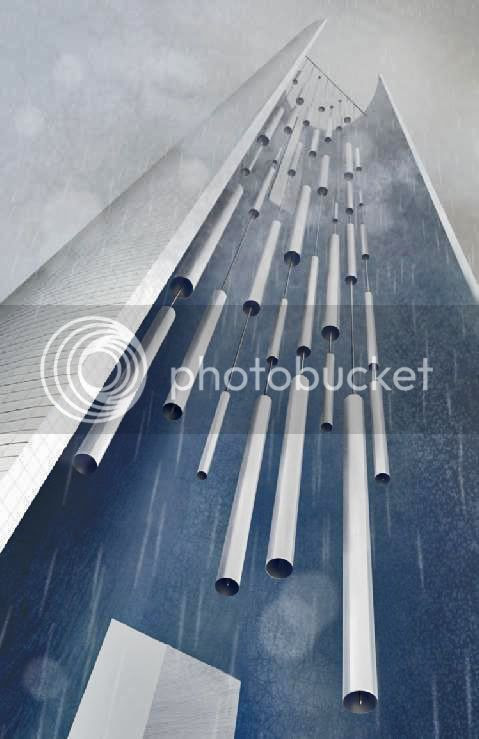 What are patriots going to do when they see that Islamic crescent in the sky, soaring triumphantly over those forty symbolic infidel souls? Is the Park Service trying to start a rebellion? We are talking literally hundreds of people every day being confronted by this outrage.


Never to rest in peace

The crash site is a graveyard, from which the remains of our forty heroes can never be extracted. A cemetery is supposed to be a place for resting in peace, but these symbolic forty souls are to gong mournfully though the ages in their symbolic Islamic hell.

Over and over the defenders of the crescent design accuse us critics of seeing what we want to see in the design, as if we could see forty symbolic souls hanging down from an Islamic shaped crescent in the sky if the architect did not PUT these things there for us to see. Look at the architect's own drawings people. Do you not see the Islamic shaped crescent in the sky? Do you not see the forty wind chimes hanging below, specifically designated to represent the lives of the 40 passengers and crew? We are describing FACTS.

One of the most obvious facts is that it is the defenders of the crescent who are seeing what they want to see, or more precisely, who are choosing NOT to see what they DON'T want to see. It's like gate security, trying desperately NOT to see the bearded man in the suicide vest.

The irony is that Flight 93 is supposed to be the symbol of our woken vigilance. Those charged with the memorialization of Flight 93 are not just un-vigilant. They are relentlessly anti-vigilant, absolutely determined not to even consider the possibility of untoward intent.

We hosted an open design competition in time of war and literally invited the entire world to enter, yet the idiots who sent out this invitation cannot concieve that the enemy might have actually taken them up on it. They are outright hostile to anyone who points out the overwhelming evidence that this is in fact what happened.


Other places where the 40 heroes are depicted as symbolically damned

In the sequence of 44 glass blocks that are to be emplaced along the flight path (equalling the number of passengers, crew AND terrorists), all four "extra" blocks are placed in the Islamic heavens.

The three that are to be inscribed with the 9/11 date will be placed on a separate upper section of Memorial Wall that is centered on the bisector of the half mile wide central crescent: exactly the position of the star on an Islamic crescent and star flag. Thus the date goes to the Islamic star. The date goes to the terrorists.

The 44th block is at the upper crescent tip, commemorating the spot where, in architect Paul Murdoch's description, the terrorists broke our circle and turned it into a giant (Mecca oriented) crescent, to be inscribed: "A field of honor forever."

In contrast, the forty blocks inscribed with the names of the forty heroes are placed just above the crash site, down below the star on the Islamic flag. They are outside of the symbolic Islamic heavens, which makes them symbolically damned.

Murdoch continues this theme with the 38 Memorial Groves. There CAN'T be 40 because the Memorial Groves are part of the giant crescent, which makes them part of the symbolic Islamic heavens, and infidels can't be depicted in the Islamic heavens. The full analysis of the 38 groves shows Murdoch's evil genius at its fullest flower. Sickening, but well worth comprehending, if you can stomach it.

Comments:
i really don't get why islamic symbol color is red? there could be other color for that like white, green blue.. but why red?