They are on the side of the enemy: 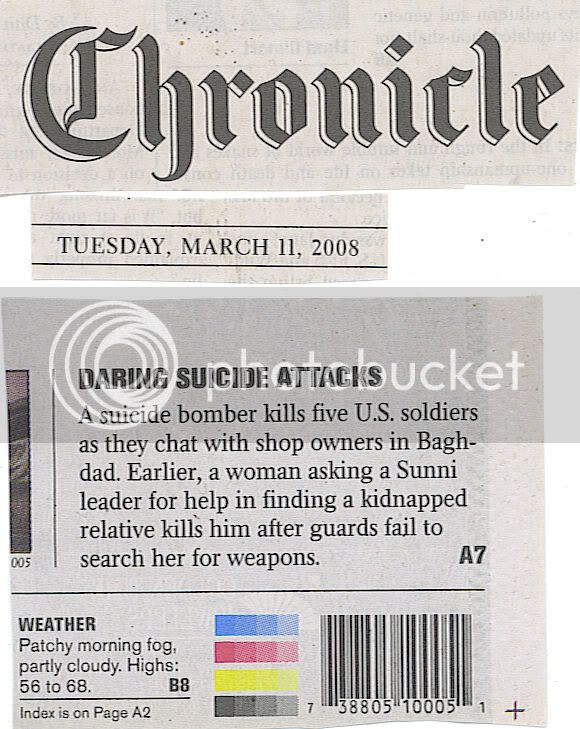 In WWII the editors of the Chronicle would have been shot for treason.

This front page teaser does not appear on-line. For hometown consumption only. They do this garbage all the time.

Do these idiots think there is no such thing as right and wrong in time of war? Earth to Chronicle: every Japanese soldier killed in WWII was a justifiable homicide. Every U.S. serviceman killed was murdered. That is what we were fighting about. The Japanese went on a murder spree and had to be stopped.

Same with al Qaeda. Same with Saddam Hussein. Every time we kill an "insurgent" in Iraq, it is a justifiable homicide. Every time they kill anyone, it is murder. That is why we are at war. We are fighting murderers. War is not beyond right and wrong. It is the most extreme expression of right and wrong.

"One man's terrorist is another man's freedom fighter," said Reuters global news chief Steven Jukes after the 9/11 attacks, explaining why Reuters would not call the attacks "terrorist."

To not get that, you have to WANT to not get that. Whether they are pro-al-Qaeda or just anti-American is harder to discern, but when their basic modus operandi is a refusal to think straight, it really doesn't matter. The two become the same.

They are on the side of the enemy.