Where is the lizard army?


Pennsylvania is on fire. Tom Burnett’s color advertisement in the Somerset Daily American, asking the people of Somerset to protest the crescent memorial to Flight 93, raised a great deal of awareness. At least four television stations covered the controversy, and there were two news stories in the Pittsburgh Tribune Review alone.

Those who went on to read my more detailed advertisement (exposing the fraudulent Park Service investigation of the giant Mecca-oriented crescent) are burning mad, and are taking up Tom Sr.’s call for state and Congressional investigations. Word is that two Pennsylvania state representatives, one Democrat and one Republican, are hot enough to co-sponsor a resolution initiating a state investigation.

That is a long way from actually getting an investigation. The hurdles are still huge, and it would sure be a big help if the high traffic conservative bloggers were pitching in. Charles Johnson and Michelle Malkin played a critical role in raising the initial alarm when the Crescent of Embrace design was unveiled in September 2005. Both also helped to expose the phony redesign, which leaves every particle of the original design completely intact.

But since 2006, nothing. For two years, as the revelations about the Memorial Project have become ever more explosive, the fire-hoses have ignored what will undoubtedly become one of the biggest scandals in American history.

This is a difficult story for our high traffic bloggers. With Flight 93 family members on both sides, no one can weigh in without checking the facts, and our high traffic bloggers are all stretched too thin to check the facts. Charles Johnson only has two eyes and two ears. No one can say he ought to do anything, when there is no way he ought to even be able to do a quarter of what he does.

Johnson’s lizard army, on the other hand, has thousands of eyes and thousands of ears. The question is whether this sensory system is connected to the lizard brain. Is there any trickle-up at LGF?

To try to establish this trickle-up connection, Charles recently installed a new link-rating system at the top of his main page. Let’s see if we can get it to work! Come on lizards. Time to rejoin the fight. Please take the links to the two advertisements that are now setting Pennsylvania on fire and see if you can rally your fellow lizards to push these links up into the collective consciousness of the lizard army.

Over the next two weeks, these ads will continue to be published in the free weeklies for the cities of Somerset and Johnstown. We are putting tinder to the first licks of flame, and maybe even have a couple of sticks in the fire, but we are still a long way from an established blaze, never mind the bonfire of awareness, and the firestorm of awareness, that it will take to stop Murdoch’s plot.

We need lizard help to stop architect Paul Murdoch from stabbing a terrorist memorial mosque into the heartland of America! (That’s what a Mecca-oriented crescent is: the central feature of a mosque.)

This is YOUR story lizards

It was five lizards who discovered, almost immediately after the Crescent of Embrace was unveiled, that the nearly one mile wide crescent points almost exactly to Mecca (kifaya, khamr, Edgren, bluemerle, and Etaoin). 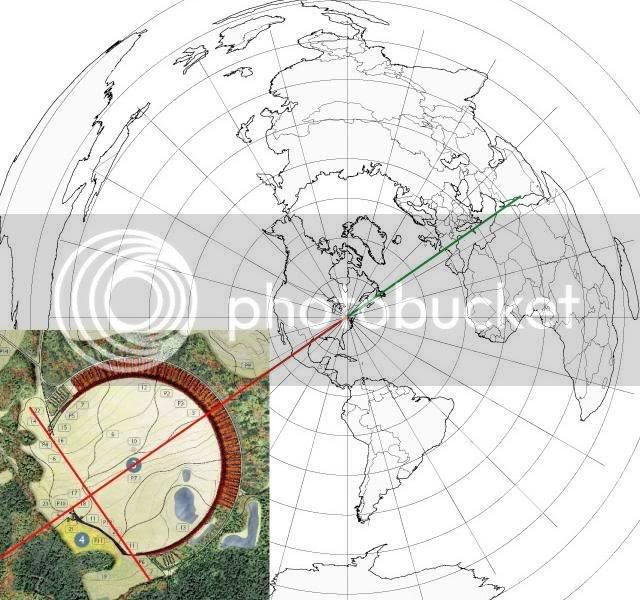 Charles stayed with the fight until July 2006, when he rallied the lizards to participate in the Park Service’s open comment period.

Then he and Michelle and all the other high traffic bloggers disappeared.

No links when Tom Burnett Sr. publicly protested the memorial by refusing to allow Tom Jr.’s name to be inscribed on one of those 44 glass blocks on the flight path (matching the number of passengers, crew AND terrorists).

No links when Tom Sr. and I protested the crescent and star flag configuration of the memorial on national television.

No links when an academic fraud told the Park Service not to worry about the similarity between the giant Mecca oriented crescent and the Mecca oriented mihrab around which every mosque is built because there has never been a mihrab anywhere near this BIG before.

No links when Congressman and presidential candidate Tom Tancredo called in November 2007 for the Park Service to scrap the crescent design entirely.

The usual difficulty for the blogosphere is to get the mainstream media to cover our discoveries. This has been inverted for the memorial story. Dozens of mainstream news stories have been written about the controversy, none of which were ever linked by any high traffic conservative bloggers. All the weight has been carried by a creditable collection of small and mid-traffic bloggers, starting with our three dozen blogburst participants.

The blogosphere has an Achilles heel. A controversial story that requires fact checking gets skipped over by our high traffic link-editors. Charles Johnson’s addition of a decentralized link-editing utility might be able to overcome this weakness, but it won’t happen automatically. For this tool to work, the lizard army has to step up and make it work.

Lizards who want to give ad #2 a bump on the LGF link-rating utility (ad #2 is the exposé of the phony Park Service investigation), you can do so here.

If someone will put up a link for rating Tom Burnett’s ad, I will post that here too.

If you want to participate in our weekly blogbursts, email Cao (caoilfhionn1 at gmail dot com) with your blog's url.

Comments:
Perhaps, Alec, the problem with getting the word out - is not a lack of interest - but a lack of time to consume all the details of this information in the given format.

You have provided the legwork and expertise to present some very complicated information that requires time and effort to consume.

May I suggest putting the basics together in a youtube video format of between 5 and 10 minutes length.

Co-ordinate an effort to have the video introduced at religious sermons the weekend of 9/5-9/8 and during memorials throughout the US on the next anniversary of 9/11.

I would suggest including some non-design elements with emotional punch for a cold splash of reality.

Some examples - end the opening statement outlining this videos agenda with the sound of a jet engine revving and a lone voice determinedly shouting "Let's Roll" just like Todd Beamer . . .and then lay out detail after heinous detail of this tribute to the terrorists.

Consider dubbing the voice tracks from the desperate cell phone calls of 9/11 when describing the tower of voices. Like the image of ghosts, intentionally fade the images of Flt 93 victims over the tower of voices design to juxtapose the 'beauty' (per Colleen L. Fraser, sister of Flt. 93 victim,Christine Fraser, and member of the Flight 93 Federal Advisory Commission)of this resting place with the horror of countless final moments endlessly repeated because their remains are to be memorialized to Islam in this design.

End the video with the final cry of allahu ak- stomped out once and for all.

The YouTube idea is a good one, I think.

Not that I know how to do any such thing!