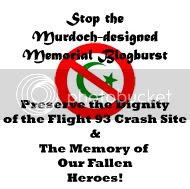 The military's top expert on jihad ideology was fired last week at the behest of a Muslim aide to Deputy Secretary of Defense Gordon England. The aide is a friend to the grand-daddy of all modern Islamic terror groups, the Muslim Brotherhood. His influence is penetration of the top levels of the Pentagon by our terror war enemies.

Kevin Jaques from Indiana University said that the similarity to an Islamic mihrab should be ignored (a mihrab is the Mecca direction indicator around which every mosque is built) because there has never been a mihrab anywhere near this big before.

Nasser Rabbat said that because the Flight 93 crescent does not point quite exactly at Mecca (it is 1.8° off), it cannot be regarded as a mihrab:

"Mihrab orientation is either correct or not. It cannot be off by some degrees." [From the Park Service's White Paper.]

Liar. Many classic mihrabs are oriented 10, 20 or 30 degrees from Mecca. The most elaborate mihrab in the world, the mihrab at the great mosque in Cordoba Spain, is oriented more than 45° off Mecca: 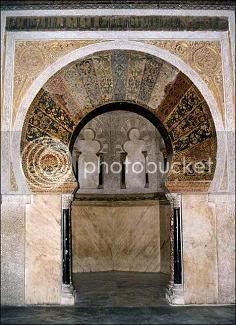 Nasser Rabbat's other lies to the Park Service are just as blatant. One of Rabbat's "talking points," as he calls them, questions whether the crescent is really an Islamic symbol at all:

The Crescent is a debatable Islamic universal symbol. Many groups do not use it. I know in fact of no militant group that uses it. Islamic modern states have opted to use it, sometimes with the star, which is a modern symbol with no Islamic connotation.

Appearing on the vast majority of Islamic flags is "no Islamic connotation"?

The specific question Rabbat was supposedly addressing is the use of a crescent for the shape of a mihrab, and here the Islamic usage is undeniable. Lots of mihrabs are pointed arch shaped, but the archetypical mihrab--the Prophet’s Mihrab at the Prophet’s Mosque in Medina--is crescent shaped both in its vertical dimension and its depth dimension: 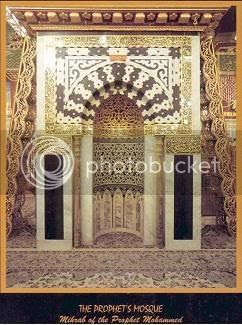 Rabbat is a professor of Islamic architecture. Mosque design falls within his field of expertise. He knows the traditional crescent shaped mihrab better than anybody and just lies about it, the same way he lies about mihrab orientation having to be exact.

And that bit about not knowing of any militant groups that use the crescent? That would make Rabbat a very rare Syrian, if he has never seen the Hezbollah flag:

When the terror groups have the crescent embrace the globe, they mean that Islam will one day rule the world and subjugate all the infidels.

Here are some more: 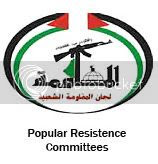 Perhaps a better question is whether there are Islamic terror groups that do not identify with the crescent.

At both the Park Service and the Pentagon, Muslim consultants who are engaged in blatant cover up of terror threats are being given the last word by top level administration officials.

Let's get those Congressional investigations going.

Comments:
It looks like the author has done his research well. Had he been just a bit more thorough, he would have discovered that the cresent and the star is debated and symbol for Islam.

The city of Byzantium (Constantinople, modern Istanbul) was dedicated to Diana, goddess of the hunt, and the crescent was the symbol of Diana. In 330 CE, Constantine rededicated the city to the virgin Mary, whose star symbol was added to the previous crescent. When the Turks took possession of Constantinople, they found lots of crescent flags and adopted it as a symbol of good omen.

Even today the turkish flag is a cresent and a star. The only reason why it might have become a common symbol in some parts of the world is due to the vast size of the ottoman (turks) empire... there may not really be anything Islamic after all.

This site explains it in detail: http://www.themodernreligion.com/misc/hh/crescent.html?

Just to add to that, the author sees a lot crescents that others might see as a circle or an arc... why don't you try and make story based on facts, it might just be a bit more interesting to read.

What would be the problem if it was intended to be a big mihrab anyway?

If we are to be so narrow minded about these things, how about this one: largest crucifix in the world is in a muslim country/emirate, Dubai (on the Burj (tower) al Arab)...

"What would be the problem if it was intended to be a big mihrab anyway?'

Honestly do you listen to yourself talk? [roll eyes] There is NO reason what so ever the victims of 'Flight 93' should be memorialized with a mihrab or anything else that reflects Islam!

Or think before you speak?

"he would have discovered that the cresent and the star is debated and symbol for Islam."

The statement was:
"militant groups that use the crescent"

BTW Regarding the largest cross in Dubai...

Designed to resemble a billowing sail

One grounds of association that I should have mentioned is the religious significance of the crescent moon in Islam: marking the beginning of Ramadan.

Another giant omission by Rabbat. He was only looking for grounds to dismiss my warnings.

In what world are the crescent and star 'debated' as Islamic symbols?

The world factbook (2002) says the crescent and star are traditional symbols of Islam.

About.com references the crescent moon and star as Islamic symbols, too.

Numerous references call those symbols out as Islamic.

Is this world where the moon and stars are 'debated' as Islamic symbols-where kitman and takeyya have been used for over fourteen hundred years?

This comment has been removed by a blog administrator.

I believe everyone ought to browse on it.