Nasser Rabbat, a Syrian professor of Islamic architecture at MIT, told the Park Service not to worry about the giant Mecca oriented crescent at the center of the Flight 93 Memorial. He said that since it does not point quite exactly to Mecca (it is off by 1.8°) it can’t be considered a proper mihrab (the central feature around which every mosque is built).

Liar. Many of the most famous mihrabs face as much as 20 or 30 degrees off of Mecca.

Here is another Rabbat deception:

Mosques are never in the shape of a crescent or a circle. This defeats the purpose of lining up the worshipers parallel to the Qibla wall (Mecca orientation), which usually translates into a rectangular shape, or sometimes a square. [From the White Paper released by the Memorial Project in August 2007.]

It is true that most mosques are rectangular, the more clearly to mark the direction to Mecca, but this is certainly not a requirement, given that the two most religiously significant sites in Islam are round mosques. Significant site #1 is the Sacred Mosque in Mecca: 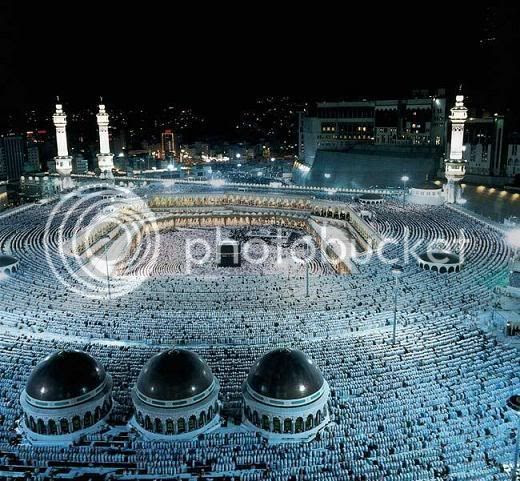 Second most significant is the Mosque of Omar, also called the Dome of the Rock, on the Temple Mount in Jerusalem, from which point Muhammad supposedly ascended into heaven:

Perhaps because of the prominence of these precedents, a small but significant number of mosques around the world follow the round model.

There is the Tun Abdul Aziz mosque built in Malaysia in 1975, referred to colloquially as the “Masjid Bulat,” or “round mosque.”

There is the new 5,000 person Arafat Mosque in Nigeria, which the architect claims is “the only round mosque in Africa," but he is wrong. Another round mosque, Al Nileen, sits at the confluence of Blue and White Nile rivers in Khartoum: 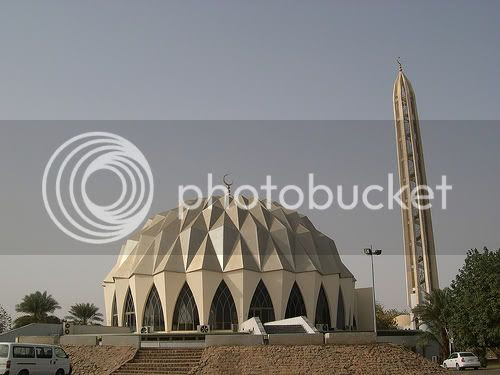 Africa is also home to some older round mosques. Here is a round mosque from the Ivory coast. Similar mosques have also been found in Sierra Leone.

Here is a modern Russian mosque, laid out in shape of an eight point star.

There is even a famous round mosque right in the heart of the EU, at the northwest corner of the Parc du Cinquantenaire in Brussels.

At the Islamic architecture website Archnet, a Muslim architect (not a native English writer) explains the problem with round mosques:

… a circular mosque can not function well because a mousqe should have an oriantation to kibla and as we all know that a circle does not have an orientation, How can we know the kibla wall if it is a circle ?

This problem does not afflict Paul Murdoch’s mosque design for the Flight 93 memorial because Murdoch's giant crescent does create an orientation. Face into the crescent to face Mecca, just as with a smaller size mihrab. 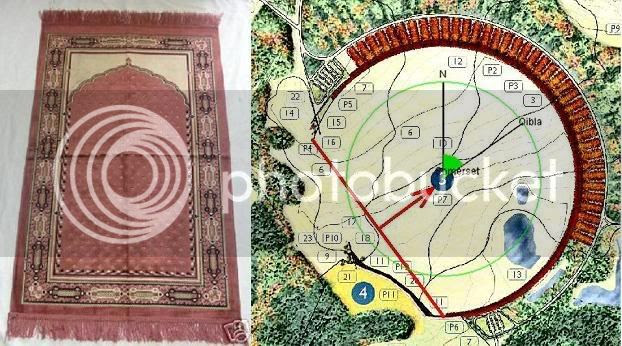 A Muslim prayer rug is a two dimensional mihrab, laid out to face Mecca, just as the Crescent of Embrace is.

Notice that to a person looking into the Flight 93 crescent, the irregularity of the outer arc of the crescent is not visible. The radial arbors are all behind the double row of red maples that line the walkway. The ends of the crescent are also well defined by the end of the walkway of red maples at the bottom and the end of the thousand foot long, fifty foot tall Entry Portal Wall on top. This is a perfectly comprehensible and recognizable Mecca direction indicator.

Rabbat’s comments to the Park Service do not even pretend to be objective. He lists “talking points” in defense of the crescent design without ever even pretending to weigh the merits of the case against the design.

Most obviously, Rabbat never considers the almost exact Mecca orientation of the giant crescent as a grounds for concern, but limits his remarks to possible excuses for not worrying about this obviously worrisome fact. The same for all of his other talking points. He only even considers ways to absolve the crescent design.

In short, Rabbat is as overtly biased as he could possibly be, yet the Park Service has no qualms about this overt bias. Rabbat gives them the excuses for unconcern that they want and they eagerly embrace him. The Park Service investigation into warnings of an enemy plot was a total fraud.