Crescent mosque violates the only physical requirement for design entries

Defenders of the crescent design for the Flight 93 memorial describe the landform around the crash site as a bowl shape that fairly dictates the use of a crescent design. On the Mike and Juliet Morning Show, Memorial Project Chairman John Reynolds was asked by host Mike Jerrick: “Why couldn’t you just use some other shape?”

Reynolds cupped his hands together for the audience and insisted that the design had to be a crescent:

Because, if you do this with you hands, this is the land there. This bowl is America holding its heroes.

But in fact, the site is not a bowl shape at all, as one can tell by looking at the topo lines on the site plan. The land slopes continually from north-northwest to south-southeast:

The Sacred Ground Plaza that marks the crash site sits between the crescent tips (above the 4). 20 feet of elevation per topo line.

Instead of following the rim of a bowl, the crescent starts on a ridgeline above the crash site and circles around to well below it, passing across the middle of a wetland that sits about 70 vertical feet below the crash site.

Not only is the crash site not a bowl, but the crescent actually does not fit the natural landform at all. Of all the designs entered in the design competition, Paul Murdoch’s Crescent of Embrace is the only one that that fails to meet the Memorial Project’s single stated physical requirement: that design entries should “respect the rural landscape.” (Scroll down to "purpose.")

To create the full arc of the crescent, a raised causeway will have to be filled in across the wetlands that collect about half-way out the lower crescent arm:

This filling in of the wetlands would never be allowed in a private project. There are environmental laws against it.

To sneak his design past the requirement to leave the landscape undisturbed, Murdoch played a very clever trick. His preliminary Crescent of Embrace design did not build a causeway across the wetlands. It only showed a quarter circle of red maple walkway, with a natural footpath skirting around the bottom of the wetlands area instead of crossing it: 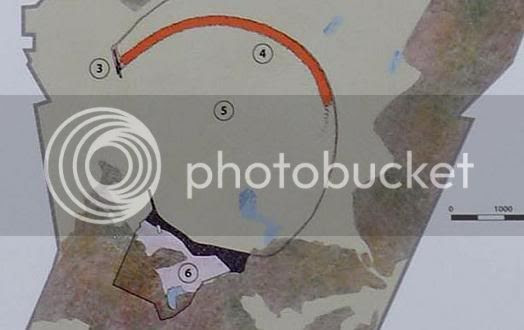 This original crescent design already had the flight path breaking the circle, turning it into what was called from the start the Crescent of Embrace, so it seems that Murdoch had in mind from the beginning to memorialize the terrorists’ circle-breaking/ crescent-creating feat. He could well have had the basic geometry of his full terrorist memorial mosque already worked out, but he knew that he would never make the first cut if he broke the competition’s one rule and violated the wetlands, so he only showed a little bit of crescent, and had his innocuous looking footpath skirt the wetlands.

To turn his preliminary design into a full Islamic crescent, Murdoch needed to build his causeway. How did he justify this violation of the wetlands? With typical brass, declaring that the causeway created a “healing landscape”:

Here visitors will be most aware of continuously connected living systems as the circular path literally bridges the hydrology of the Bowl. ["Wetlands," p. 5.]

The highway department should hire this guy for P.R.. He could sell the environmentalists on how close a new road will bring them to nature. Why, they will be "literally bridging it!" What could be better? Good pitch. The Memorial Project bought it.

Most remarkable is Patrick White, vice president of Families of Flight 93. In private conversation at the Memorial Project's July 2007 meeting, White told one of my compatriots that an expensive drainage system had been developed for the crescent design and that no other design could work on the site because this elaborate drainage system would only work with the crescent design.

Duh. The crescent design is the only design out of all thousand submitted that needs a drainage system. Every other design left the wetland untouched, as the Memorial Project had asked. Yet these people all really seem to mean it when they insist that this is the only design that fits the land.

Didn't they notice that not one of the other thousand designs was a crescent? How could that be, if the landform really dictated a crescent? How did they get so wrapped in the emotion of the crescent’s “healing embrace” that they can’t see anything else?

Because Paul Murdoch is an artistic genius who had these grieving people in the palms of his hands. The man is diabolical!

Want to join our blogbursts and be on the blogburst blogroll? Email Cao at caoilfhionn1 at gmail dot com, with your blog's url address. The blogburst will be sent out once a week to the participants, for simultaneous publication on this issue on Wednesdays.

Comments:
Is there a link to view the original entries for this memorial competition which could prove NO other entry thought a crescent or circle was dictated by the natural grade of the property?

Murdochs was the ONLY circular (crescent shaped) entry?

Why isn't there an outcry from the environmentalists regarding the wetlands?

Anyone can get access to the full design competition archives by calling the National Park Service curator at (814) 443-4557. They will send you a login address and a password.

Obviously some of the designs have circular shapes, but none expressing the supposed giant bowl that the Crescent of Embrace claims to fit. Thus for instance, one of the designs used a circle of columns on a much smaller scale, maybe a hundred and fifty feet across. Instead of using any crescent or bowl shape of the land, it stays within the relatively level area right around the crash site itself.

It was quite a while ago that I looked through the archive. If anyone wants to do a check, please report back on the accuracy of my recollection. It is certainly possible that I overlooked something.

Aha. Doing some looking, I find that there IS one other design--"Sacrifice," by Austin and Pihlak, that also uses a giant circular crescent of trees, also on the same huge scale as Murdoch's crescent, except this one actually does conform to the shape of the land, with the arms of the crescent reaching up the slope of the hill (to the north-northwest). So I was both wrong and right, as this giant crescent actually gives the lie to Murdoch's claim that his crescent fits the landscape. Instead of going with the land, Murdoch's Mecca-oriented crescent tilts across it.

I should have remembered this design, since Austin and Pihlak are claiming that Murdoch actually ripped off their plan. Superficially, they have a good case. They employed a full giant crescent, while he only employed a little bit of crescent, but as described in my post above, the basic idea of Murdoch's full terrorist memorializing design (commemorating the terrorists circle-breaking/ crescent creating feat) was already present in his preliminary Crescent of Embrace design. Thus I don't think Murdoch actually did borrow from the Austin/Pihlak plan, but rather was strategically holding his full crescent scheme back so that he would not have to reveal how he was ultimately planning to build a raised causeway across the wetland, which would have gotten his plan nixed.

Why couldn't he have just had a crescent shaped line of trees without filling in the wetland with a raised roadway, as the Austin/Pihlak plan does? Because that would have screwed up the functionality of Murdoch's mosque design. Filling in the raised walkway serves several purposes. For one, it creates separate male and female ablution ponds, one inside the crescent (the male prayer area), and one outside that women can use.

The raised walkway also allows the crescent of trees to be continuous. These trees form what are called the "riwaqs" in Murdoch's mosque design, following the example of the standing palms that lined the prayer area of Muhammad's first mosque in Medina. Having a break in the trees in the area of the wetlands would be acceptable under the principles of mosque design, but not ideal, and Murdoch was trying to create the perfect terrorist memorial mosque.

Notice also that the Austin/Pihlak design did not get picked, in spite of being very artful, and the likely reason is that it is so grandiose. Instead of "respecting the rural landscape" as they were instructed, they transformed the landscape. Murdoch was smarter. He realized that if you wanted to do something grandiose, you had to be selected as a finalist FIRST, and that his how he played his hand.

Perhaps you could create/post a couple of 3D views of the "bowl" topography (sans trees/structures of course), if that data is available at sufficient resolution.

Can't a lawsuit be brought regarding the wetlands?

It might be too late for a lawsuit over the wetlands, since environmental review was part of the official review process prior to final Park Service approval. What it will never be too late for is a lawsuit against building a national park in the form of a terrorist memorial mosque.

This violates the non-establishment clause of the Constitution, and the design if packed to the gills with proof of mosque intent. To be able to claim his victory once it is a fait accompli, Murdoch needed to include proof of what he was doing. Thus he repeating entire multi-Mecca oriented geometries in his design, something that could simply never happen by accident (in case anyone is stupid enough to think that the overt crescent and star flag configuration of the undisguised original was an accident).

With all this proof of intent in the design, it would be possible to establish unconstitutionality at the highest burden of proof--the "beyond any rational doubt" standard used in criminal cases--never mind the preponderance of evidence standard that is used in civil cases.

I like the valuable information you provide in your articles. I’ll bookmark your weblog and check again here regularly. I’m quite certain I will learn plenty of new stuff right here! Best of luck for the next!