The Park Service has a history of keeping the Secretary of the Interior in the dark about the decisions it makes in his name. It is likely that Secretary Dirk Kempthorne has never been told about the many warnings of Islamic symbolism in the planned Flight 93 Memorial. Please help bring Dirk into the loop by pasting the following letter (or one of your own) into an email for him.

Please heed Congressman Tom Tancredo's call to completely scrap the present design for the Flight 93 Memorial. The original Crescent of Embrace design would have planted a bare naked crescent and star flag on the crash site:

The memorial plaza that sits roughly in the position of the star on an Islamic flag marks the crash site. (Click pics for larger images.)

All the redesign did was add some trees to the west of the original crescent:

Aside from the re-coloring of the site-plan image, the only actual change in the design is the additional arc of trees to the rear of a person facing into the original crescent.

The Park Service promised Congressman Tancredo in 2005 that Islamic iconography would be removed from the memorial. Instead, this iconography has only been very slightly disguised. Every particle of the original Crescent of Embrace design remains completely intact in the redesign.

The giant crescent points to Mecca
In September 2005, a half dozen different bloggers verified that a person facing directly into the original Crescent of Embrace would be facing almost exactly at Mecca. That makes the crescent a mihrab, the central feature around which every mosque is built.

Face into the crescent to face Mecca: 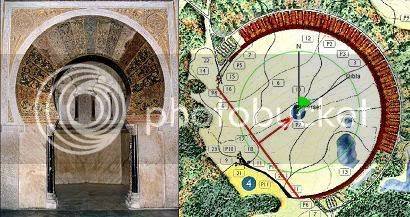 You can plant as many trees around a mosque as you want and it will still be a mosque. But this isn't just the world's largest mosque. The planned memorial is also full of terrorist memorializing features.

Please hear my voice along with those of Congressman Tancredo and Tom Burnett Sr., who is refusing to allow Tom Jr.'s name to be used in the crescent design. The memorial to Flight 93 should not be a terrorist memorial mosque.