No comment from the Park Service yet on Congressman Tancredo's request for a new Flight 93 Memorial. We did a little better with last week's blogburst letters. Some emailers got a response from Memorial Project Superintendent Joanne Hanley, answering Mr. Tancredo's contention that the original giant crescent is still present in the redesign. Interestingly, her description of the redesign actually admits that the giant crescent IS still present, both geometrically and thematically.

In 2005, architect Paul Murdoch explained his original Crescent of Embrace design in terms of the flight path: as the hijacked airliner came over the ridgeline above the crash site, its flight path symbolically broke the circle, turning it into a giant crescent. In the original design, the broken off part of the circle was removed entirely:

Flight 93 came down from the Northwest (the upper left). The flight path breaks the circle at the upper crescent tip, says Paul Murdoch, then continues down to the crash site, which is located between the crescent tips (roughly in the position of the star on an Islamic crescent and star flag).

In describing the barely altered redesign, Superintendent Hanley uses the exact same "breaking the circle" language that Paul Murdoch used to describe the original design, only now the broken off part of the circle is not completely removed. A broken chunk of it remains, so that the design now includes "two breaks" instead of one:

The most prominent refinement was in the treatment of the naturally occurring bowl-shaped landscape feature. The design now surrounds that area with a circle of trees which is broken in two places - the location which marks the flight path as it breaks the circular continuity of the bowl edge, and the Sacred Ground where the crash occurred. The locations of the two breaks in the circle are based on the flight path and crash site of Flight 93.

The site plan graphic for the redesign was dramatically re-colored, making the crescent LOOK more like a circle. You have to examine closely to see that the original break in the crescent is still there, along with the new "second break." But as Superintendent Hanley admits, the original break IS still there, and it is still intended to be seen as being there. Hanley is directly admitting what Congressman Tancredo is complaining about, that the original crescent has only been disguised.

A side-by-side comparison of the Crescent of Embrace site-plan and the redesign site-plan confirms that the only change was to include a chunk of the symbolically broken off part of the imaginary full circle:

Ignoring the re-coloring of the image, the only change is the additional arc of trees to the left side of the crescent. (Click pic for larger view.)

Including a chunk of the broken off part of the circle does nothing to remove the original crescent, but on the contrary is perfectly consistent with it, both geometrically and thematically. The terrorists are still depicted as breaking our humanitarian circle and turning it into a giant Islamic shaped crescent.

Just to make sure people get it, Paul Murdoch has placed a huge glass block at the spot where this circle-breaking, crescent-creating feat takes place. It is the 44th translucent block emplaced along the flight path (matching the number of passengers, crew, AND terrorists) and is inscribed: "a field of honor forever."

An August 18th article in the Pittsburgh Post Gazette quoted Superintendent Hanley denying the Mecca orientation of the giant crescent:

"The only thing that orients the memorial is the crash site," she said.

"It's oriented toward the Sacred Ground," he said. "It just couldn't be clearer."

The symbolism of the memorial, he continued, is representative of the geography of the crash site, an idea that predates Islam or any other major religion.

They are not calling it a crescent and star configuration, but that is what they are describing, and what they are talking about here is the redesign. They are admitting that the design still has the arms of the crescent reaching out towards the crash site, which sits between the crescent tips, in the position of the star on an Islamic flag. “It just couldn’t be clearer.”

Connect a line from the lower crescent tip to the thematic upper crescent tip (the 44th glass block, commemorating the spot where the flight path breaks the circle) and a perpendicular to this line (the direction of a person facing directly into the giant crescent) points exactly to Mecca. Thus does Paul Murdoch tie the Islamic features and the terrorist memorializing features of his design into a perfect bin Ladenist crescent of embrace.

We hosted an open design competition in time of war. Of course the enemy would enter. The only thing that is hard to understand is why the Memorial Project is willfully blind to this ploy. 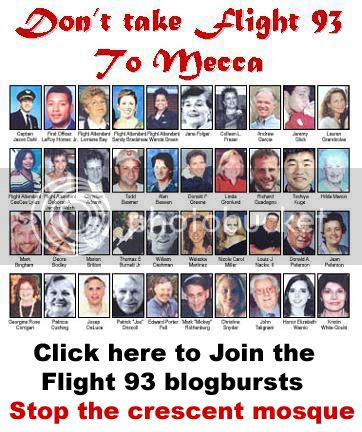