Thanks to all the blogburst participants who are helping to expose the Flight 93 Memorial as a memorial to the terrorists.

There are two features of the crescent design that eluded me until recently. First, I couldn’t figure out why there were only 38 Memorial Groves instead of the advertised 40: 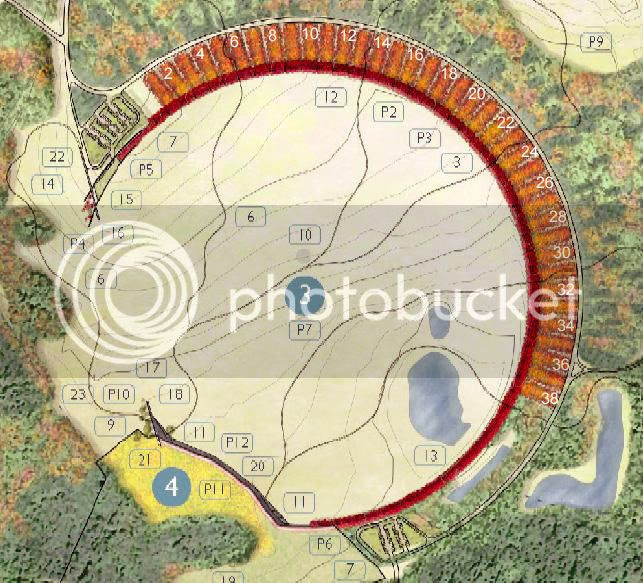 Second, I know that the center of the Tower of Voices portion of the memorial is a year-round accurate Islamic prayer-time sundial, and I know that a line across the most obtruding tips of the Tower crescents gives the direction to Mecca, but I couldn’t figure out what Murdoch was doing with the rest of the vast array of nested crescents that surround the Tower.

Both puzzles turn out to have the same answer. The 38 Memorial Groves can be seen as a set of 19 nested crescents, each one pointing to the White House: 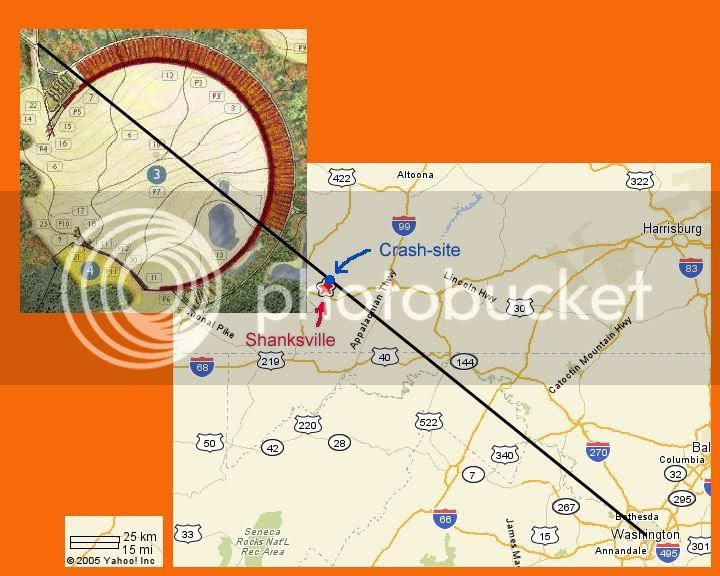 A line across the Memorial Groves has the same slope (129° clockwise from north) as a line between the crash site and the White House.

Take two groves away from the arc of 38 and a line across the tips of the remaining 36 will also point to the White House. Ditto for 34 groves, 32, etcetera, down to 2. One nested crescent for each of the 19 9/11 terrorists.

Now count the arcs of 2 or more trees in the Tower array: 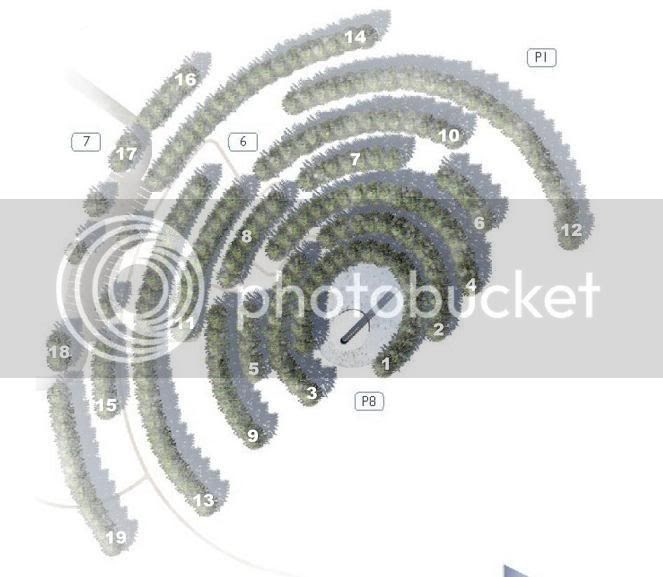 The Tower array contains nineteen nested crescents of various lengths, just as the 38 Memorial Groves do, plus it contains four single trees, giving special recognition to the four Flight 93 hijackers.

So this is the short answer to the 38 groves riddle: one of Paul Murdoch's repeated terrorist memorializing themes is his repeated use of 19 nested crescents to memorialize the full complement of 19 9/11 hijackers.

Most of today's other blogbursters (see the special blogburst blogroll on the sidebar) are posting about the media's current flat denial of what a half dozen different bloggers have already confirmed: the Mecca orientation of the giant crescent. There could not be more overt challenge to the blogosphere's fact checking. Can the blogosphere rise to the occasion?

Usually our challenge is just the opposite. The blogosphere uncovers an important issue and is unable to get its fact checking into the mainstream media. This time both of Pittsburgh's two major newspapers are coming out with both barrels against the easy to verify Mecca-orientation of the crescent memorial and the question is whether the blogosphere is going to show up for the fight. Can bloggers retrieve their own earlier fact checking (from September 2005) and expose the media's blatant deception? (My full post post about Pittsburgh media blocking for the hijacker here.)

If you are a blogger, please join our blogbursts. Cao will send out a default post every week for those who don't have something of their own to post, and we'll keep hammering at it until people understand that America is actually in the process of building a terrorist memorial mosque on the Flight 93 crash site.

If you don't have your own blog, please leave comments that link to this subject wherever it seems relevant. The media is working furiously to suppress the truth about the Flight 93 Memorial. They knew about the Mecca orientation of the crescent way back in 2005 and decided to suppress it. If the truth comes out now, they are ruined, so they are flat out abetting the terrorist.

That leaves it to the rest of us to break this story for ourselves. Our big advantage? This is going to be fun. How many chances are you going to get to help tackle a hijacker?

The density of Islamic and terrorist memorializing symbolism that Murdoch achieves is quite amazing. Just in the Tower of Voices portion of the memorial there are four major terror-mosque features:

1. A line across the most obtruding tips of the Tower crescents points 1.8° north of mecca, exactly replicating the almost-exact Mecca orientation of the giant central crescent.

2. The Tower itself, together with the innmost arc of trees, forms a year round accurate Islamic prayer-time sundial

3. There is the repetition of the 19 nested crescents theme.

Matching Murdoch's evil genius is the equally amazing stupidity and mendacity of the many defenders of the crescent who are fully aware of the Mecca orientation of Murdoch's giant crescent; of the 44 inscribed translucent blocks emplaced along the flight path; of the placement of the 9/11 date in the exact position of the star on an Islamic crescent and star flag; yet insist that it is all coincidence, at the same time as they tell the public that none of these things are true. 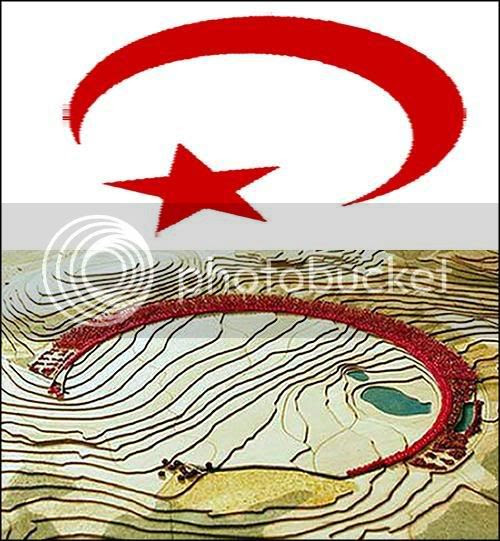 Every particle of this original Crescent of Embrace design remains completely intact in the Bowl of Embrace redesign, which only added some surrounding trees.

The American people caught this bastard Murdoch sneaking his crescent and star flag onto the crash site back in September 2005. The Memorial Project told him to put on a disguise and try again. No more. Murdoch and his enablers all need to be exposed now.

Comments:
WOW. THAT was a surprise!!!

What's the story on Murdoch?

Is he Muslim, himself?

If you don't know, do you have a theory?

Murdoch has played his cards very close to the vest. I have not been able to find out anyting about him, although Jim Quinn, of Pittsburgh's Quinn and Rose Show, says that his inside contact in Washington ("son of deep throat" I think he calls him), says that Murdoch is from a left wing family, which does not tell us very much.

The obvious speculation is that Murdoch converted to Islam at some point and became a Wahabbist, but personally, I only know what Murdoch did: that he designed a terrorist memorial mosque. Another thing he did is lie, telling Minister Ron McCrae of Johnstown PA that he had talked to me extensively, offering changes and trying to satisfy my objections to his design (as he had actually done with McCrae), when in fact he and I had never been in contact. (Crescent of Betrayal, download 3, chapter 8, p. 142.)

It would seem that either Murdoch himself or someone advising Murdoch has an interest in all these memorializing mosque elements. I would love to know what the real story on him is.

Any chance Paul's dad is John E. Murdoch at Harvard in "History of Science" department?

Why not just do a background search on-line and if that raises nothing hire a PI to find out about Paul? Can't this be expensed to the book? ;)

Why do we choose such moral reprobates to design our memorials these days? We got Liebskind (of dead baby poetry fame) doing the new world trade center, and now we got Murdoch?

Just too wierd. And wicked.

Alec, with Tancredo onboard, maybe now this will get out to the public more. I would like to know the scoop on Murdoch myself. It's obvious he has ties to radical Islam. Shame on him and I hope he gets some major payback for this. Karmic debt paid and served up cold.