When Tom Burnett Sr. was helping to pick a memorial to Flight 93, he objected vehemently to the planting of a huge Islamic shaped crescent on the crash site. The Project asked if he would be okay with the Crescent of Embrace design if they didn’t call it a crescent. He said no way:

What the hell? You change words. A pig is a pig!

No doubt about that.

“How about if we don’t CALL it a crescent?” (Click pic for larger image)

Mountain Goat and the 44 blocks

From PJ Country comes news of the Memorial Project’s latest effort to help architect Paul Murdoch adjust the disguise on his terrorist memorializing design, just enough for him to slip through gate security.

“Mountain Goat” called the Memorial Project a few weeks ago to ask about the 44 inscribed translucent blocks that are to be emplaced along the flight path. (There were 40 heroes and 4 terrorists on the flight.)

The person he spoke to said that the three translucent marble blocks that were to be inscribed with the 9/11 date are going to be replaced with a single block, “roughly the length three of the other blocks would have been.”

That would reduce the block count from 44 to 42, but would it actually fix anything?

Whether the 9/11 date is inscribed on three blocks or one, these blocks are to be built into a separate section of Memorial Wall that is centered on the bisector of the giant crescent. That is the exact position of the star on an Islamic crescent and star flag. Thus the date goes to the Islamic flag--the date goes to the terrorists--no matter how many blocks are used.

See the trail that enters the Memorial Plaza (the star on the flag) from the left? It divides the Memorial Wall into separate upper and lower sections. The upper section has the 9/11 date inscribed. You can see that this upper section of wall is centered on the bisector of the giant crescent (the exact position of an Islamic star). Click for larger image.

End it, don't mend it

No amount of tweaking the design can alter its terrorist memorializing intent. “Fix” every one of the half dozen large scale terrorist memorializing features in the design by making them all a little bit "off," and it only establishes the long term Islamo-fascist goal of one day restoring the Crescent mosque to its intended configuration, the same way the jihadists now use re-possession of the al-Aqsa mosque in Jerusalem (the Dome of the Rock) as a motivation driving the Jews out of Israel.

Most ridiculous of all is the Bowl of Embrace redesign, which leaves every particle of the original Crescent of Embrace design completely intact, only adding some surrounding trees. “Here, put on this burka, then you can sneak your bomb on board the airplane.”

The proper answer, when someone is caught trying to sneak an Islamo-fascist plot through gate security, is not to tell him to go back outside and try again. It is to cart him away.

Call or write the Memorial Project 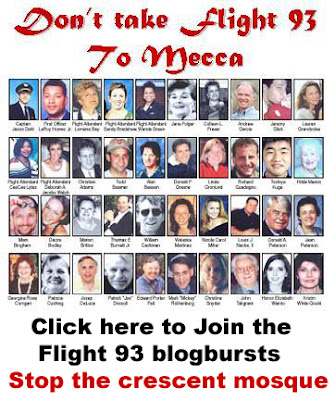 If anyone wants to contact the Memorial Project and see if they are still claiming that the three 9/11 blocks are to be replaced with one big block, contact information is below. Please post any response you get in the comments.


And here are some email addresses, all together, and individually:

Communications officer, National Park Service, Gerry Gaumer (one of the rare heroes of the story so far):
Gerry_Gaumer@nps.gov