Last year I learned from Pittsburgh Post Gazette reporter Paula Reed Ward that the editors of the Post Gazette knew about the Mecca-orientation of the Crescent of Embrace way back in September 2005, and decided as a group not to report it. (See Crescent of Betrayal, download 3, page 108.)

For those who are not up to speed, here is graphical proof (for the umpteenth time) that a person facing into the giant central crescent of the Flight 93 Memorial (red arrow) is facing Mecca: 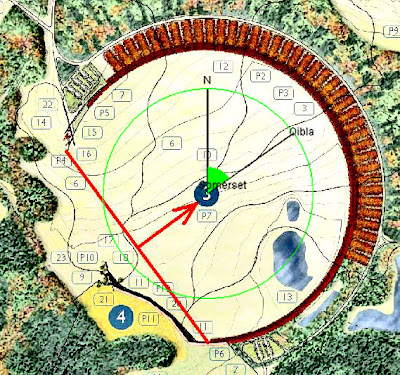 Credit Sarah Wells, who found the Mecca-direction calculator at Islam.com (the source of the superimposed green "qibla" direction for Somerset PA).
For more than a year, several other western Pennsylvania newspapers have also known about the Mecca orientation of the giant crescent (which remains completely intact in the superficially altered Bowl of Embrace redesign). All have refused to report their own fact checking. This last Monday, the Johnstown Tribune Democrat added to the list of bad behavior.

To force the Tribune Democrat to report on my expose of the terrorist memorializing design, I bought ads, promising conflict at the Memorial Project's upcoming public meeting. Again, they refused to report their own fact checking. In the Tribune story, my claim of Mecca orientation is rebutted by Patrick White, Vice President of the Families of Flight 93, who claims that my charges have been investigated and been found to be untrue and "preposterous," and that's all the Tribune reports. They say nothing about who is right, despite the fact that it is trivially easy to fact-check the orientation of the crescent, and despite the fact that the Tribune's reporter DID fact-check the orientation of the crescent.

I discussed my graphical analyses with reporter Kecia Bal while she had my high resolution map of the site plan on her computer screen. She had no trouble understanding the graphical proof of Mecca orientation excerpted above. When she asked me how it was possible that these revelations had not been reported before, I gently reminded her that I had tried to get her and other reporters to check and report on the facts the year before, instead of just seeking comment. When there is a fact-based controversy, reporters are supposed to check the facts and report who is right. "Just don't let anyone keep you from doing your job," I urged her. "Check my claims and report your findings." And she was doing it, asking me for the original Crescent of Embrace PDF's so she could verify the locations of the 44 glass blocks on the flight path (matching the number of passengers, crew, and terrorists.)

I also told Kecia how the Memorial Project has been misleading the families. In an April 2006 Conference call, Project Superintendent Joanne Hanley explained to me why she wasn't worried about the Mecca orientation of the giant crescent. "It's not exact," she told me. "That's one we talked about. It has to be exact." (Download 3, page 145.) At the same time that she was admitting to me the almost exact orientation of the giant crescent, she was telling the families that my information had been debunked.

Patrick White's denial of the Mecca orientation of the crescent proves that the families are still being misled. Kecia knows for a fact that White is misinformed, yet she goes along with this horrible abuse of the families. If graphical analysis showed that I was in error, the Tribune Democrat would publish it in a heartbeat. Since it shows that I am right, the Tribune decides to withold its own fact checking, only reporting that the Flight 93 families are accusing me of propagating known falsehoods.

That is grossly irresponsible. If the Tribune does not want to help tackle the hijacker, at least they should not block for him, and they certainly should not use known-to-be-misled family members to do it.

I am guessing that the culprit is not Kecia, but is Tribune editor, Chip Minemyer. I am sure that Minemyer has known about what is in the crescent design since February 2006, because he assured me on the phone at that time that he had looked at my graphics and my analysis and had assigned a reporter to investigate my information. That fact checking (Kirk Swauger wrote the Tribune Democrat's report that time) was never published. Swauger's report, like Bal's, only cites my claim of Mecca-orientation (which is only the beginning of what I gave to the Tribune Democrat), and follows it with a claim by a family member that my information has been thoroughly investigated and debunked.

Minemyer has been suppressing what he knows to be newsworthy evidence of Islamic and terrorist memorializing design features for a year and a half. Whatever his motivation, it seems that he is now doubling down. He knows he will be ruined if it comes out that he has been suppressing this information, so he suppresses it with even more determination.

If Kecia wants to send me her news report as she wanted to write it, I will be glad to help clear her name by publishing it here. In our conversation, Kecia seemed to think that the Tribune should publish my high resolution map of the terrorist memorializing design features. Send me your unpublished fact-checking Kecia, and we'll show 'em what real reporting is. (Ditto for Kirk.)

My next step is to publish my high resolution color map in the Somerset Daily American, along with an expose of how the Tribune Democrat suppressed its own fact checking in order to use known-to-be-misled family members to block for the hijacker. No, I don't have the money for such a large color ad, but I am throwing my body at this. Somebody has to tackle the damned hijacker, and if I can't get help, I will most certainly do it myself.

(Thanks to Bill Steiner, Ace of Spades, and all those others who have been trying to help.)

Comments:
That's the direction the plane was coming in, numbnuts.

No, the plane did not come in from Mecca. It came down from the NNW, across the upper crescent tip, crashing down between the crescent tips. Architect Paul Murdoch has placed the crash site in roughly the position of the star on an Islamic crescent and star flag. Isn't that nice?

What the hell is going on with this memorial???? This is beyond belief!!! What about the families of those who were on the plane??? This is insanity!!!

Iggy, you are a grade A, 100% pure ignorant jackhole. Here's the flight path that Flight 93 took before it crashed:

Notice that, as Alec already pointed out, it came in from the NNW (with North being perpendicular to the Pennsylvania-Maryland border).

So who's the numbnuts again?