Below is a blow up of the Tower of Voices from the Crescent of Embrace site plan. I have drawn the two Jihadist orientations in. The red line measures the most obvious crescent orientation, going tip to tip on the crescent that sticks out the most. The pixel count of this line is 239/177, and the angle clockwise from north is arctangent (239/177) = 53.47. This is almost identical to the angle of the bisector of the red maple crescent (53.5 degrees from north). (See my previous post for an explanation of this calculational method, which I borrowed from Politicalities.) 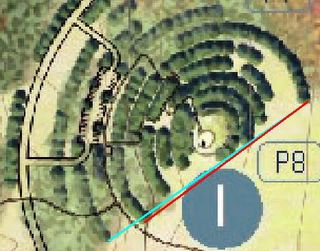 At the top of the crescent structure, there is only one crescent point to choose from, but at the bottom end some secondary choices are possible. Moving to the next crescent point (the aqua line) actually connects four crescent tips, suggesting that it too might be an intended line. This line has a pixel count of 290/203, making for an angle of 55.01 degrees from north, in contrast to the exact Mecca line angle of 55.2 degrees.

What made me look closer at the Tower of Voices was coming across a comment at LGF noting that an Islamic minaret is a literal tower of voices, and others noting that criers issue the Islamic call to prayers from minarets at the designated times of day.

Looking up the Park Foundation’s detail PDF for the Tower (furthest to the right), I couldn’t help noticing that it looks like some kind of giant sundial. 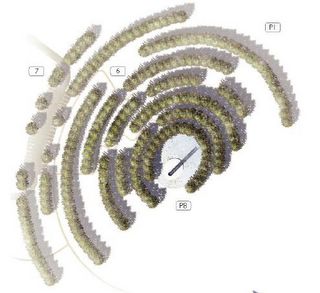 Features line the area swept by the sun's shadow, as with a sundial.

The obvious suspicion is that it somehow indicates Muslim prayer times, but none of the obvious markers (gaps between trees, etcetera) lie near the north-south shadow line that would coincide with noon prayers. The array has the elliptical shape of an analemmatic sundial, but those are oriented with the foci on an east west line, while the ellipses in the Tower array have their foci on a north-northeast line. If it is a sundial, the key to reading it would seem to be something arcane.

What is unambiguous is that it shares the Islamist orientations of the red maple crescent: one orientation coinciding with the terrorist memorial wall, one orientation pointing precisely towards Mecca. Whoever did this was thorough. He didn’t want to miss a trick. I think the Islamist plotter wanted it to be undeniable, after the memorial was a fait accompli, that he had succeeded in planting a terrorist memorial on the graves of the infidels. It’s almost as if he knew how hard it would be to convince some people!


When I get a chance, I will post an update with angle measurements for the detail view of the Tower's crescent array. With the additional detail, one can locate several other lines in the array that replicate the two orientations given by the outer crescent tips. At the same time, the whole graphic seems to be turned a fraction of a degree vis a vis the blow-up from the overall site plan. Only the site plan (the graphic I used above) specifies a north-at-the-top orientation, so that is presumably the correct one.

Comments:
Dude.. I am not much into reading, but somehow I got to read lots of articles on your blog. Its amazing how interesting it is for me to visit you very often :)